Last March 12, I went to the local library and checked out a copy of The Plague by Albert Camus. (In light our new Coronavirus pandemic.)  Which book, incidentally, I cannot now return, because that library and all others in the area are closed. (Possibly “for the duration.” See below right.)

At the same time I checked out a copy of What Jesus Meant, by Garry Wills, for a bit more uplifting reading. And I also started researching more on this “plague” business.

.” According to Wikipedia, that term is restricted to the “infectious disease caused by the bacterium Yersinia pestis.” (Symptoms for that version generally included fever, weakness and headache, similar to the Coronavirus.) But the most familiar form is bubonic plague, which was one of three types of this plague:

Bubonic and septicemic plague are generally spread by flea bites or handling an infected animal. The pneumonitic form is generally spread between people through the air via infectious droplets. Diagnosis is typically by finding the bacterium in fluid from a lymph node, blood or sputum. 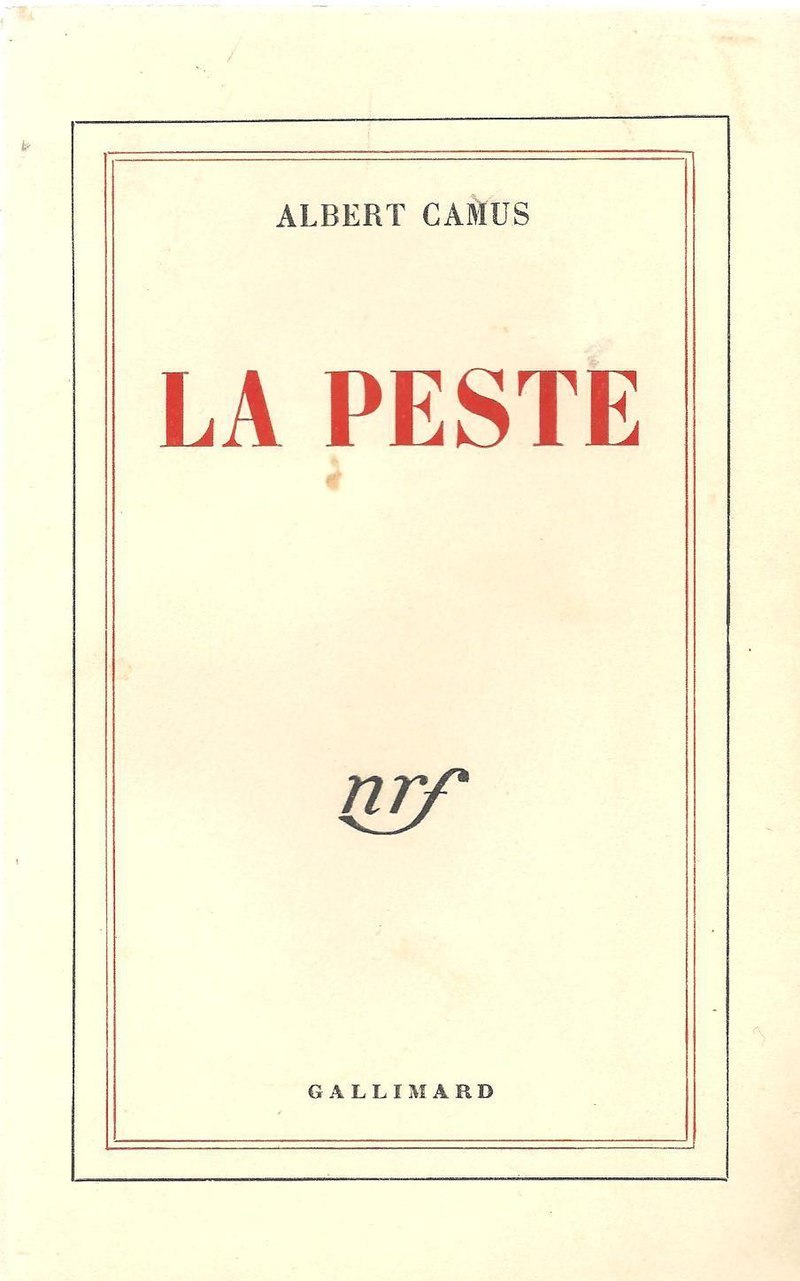 The good news: There is now both vaccine and valid treatment for the plague of in Camus’ novel, at left. (Like “antibiotics and supportive care.” With which the risk of death through treatment is “about 10% while without it is about 70%.”) Not so with Coronavirus.

Not yet anyway… (And “La Peste” is French for “The Plague.”)

I also learned the difference between epidemic and a pandemic.

The web article Difference between epidemic and a pandemic went into great detail on distinctions between the terms, a distinction “often blurred, even among epidemiologists:”

The article also noted the term “plague” refers “specifically to a contagious bacterial disease characterized by fever and delirium, such as bubonic plague.”

But we seem to be splitting hairs here. I didn’t check out Camus’ book because it was exactly on point with the current situation. I wanted to see what similarities there might be between the 1940s Algeria described by Camus, and America today, in March 2020.

For myself, in some ways my life is more relaxed with this new “plague on a community.”

With none of my sport-teams playing, there’s no “canary in a coal mine” aspect to my spiritual life now. I have no pressing need for the ongoing ritual purity and ritual sacrifice that have been such a big part of my life since 1989 or so. (See “Unintended consequences” – and the search for Truth – illustrated at right – and On my “mission from God,” from a companion blog.)

What remains is a series of annoying but petty minor inconveniences…

The biggest example? No more dine-in lunches, or dinners, or stopping by a local bar for a beer or two before Wednesday-night choir practice. And no more choir practice, or church on Sunday either for that matter. And pretty much every morning I used to stop by a local McDonald’s for iced coffee. I liked to sip a bit out, then put in lots more ice. (From the ice machine in the dine-in area. Remember those?)

There’s no more of that, but I’ve adapted. I now bring cup-and-straw from the day before (“saving the world, one McDonald’s straw at a time”), and fill it with ice from my home-freezer.  As for dine-in, every three days a week at work now – at the “local branch of Keep America Beautiful,” still open as of this writing – I take my to-go order to the parish hall of my church, around the corner. (I’m the vestry person in charge of buildings, so I have a key.) There in the peace and quiet of the parish hall, I eat my lunch and read my hand-me-down Time magazines.

All of which is, I suppose, a metaphor of sorts…

But then again, even before this “new plague” hit I was pretty much a hermit, living in a rambling four-bedroom house on an isolated acre of woodland. (It’s so isolated that I don’t have any curtains or venetian blinds on any windows. Who the heck is going to look in?)

But back to The Plague by Camus. Here’s a quote from Part 1, early in the book:

Everybody knows that pestilences have a way of recurring in the world; yet somehow we find it hard to believe in ones that crash down on our heads from a blue sky. There have been as many plagues as wars in history; yet always plagues and wars take people equally by surprise.*

Which certainly seems true of this latest pestilence. It certainly came as a surprise.

I’ll no doubt be writing more meditations on this “new plague,” but for now the Faithful Reader is probably wondering, “What the heck is that beaked get-up at the top of the page?”

For a summary answer see Why plague doctors wore those strange beaked masks:

So much for that question. It’s a good thing we don’t believe in those silly superstitions anymore. And it’s a good thing history doesn’t repeat itself. And that we can learn so much from the lessons of the past, but we’re digressing again. So, going back to that review “The Plague” I cited above, here’s one thing the reviewer said, that seems to be relevant:

One lesson? The current pestilence might lead to a massive change in our present national life, and especially our national political life. That is, the present “Coronavirus” might lead to a general and sweeping American “softening of the heart.”

Along with “a turning away from judgment and moralizing to joy and gratitude.” Or even a realization that there “are more things to admire in [all] people than to despise…” 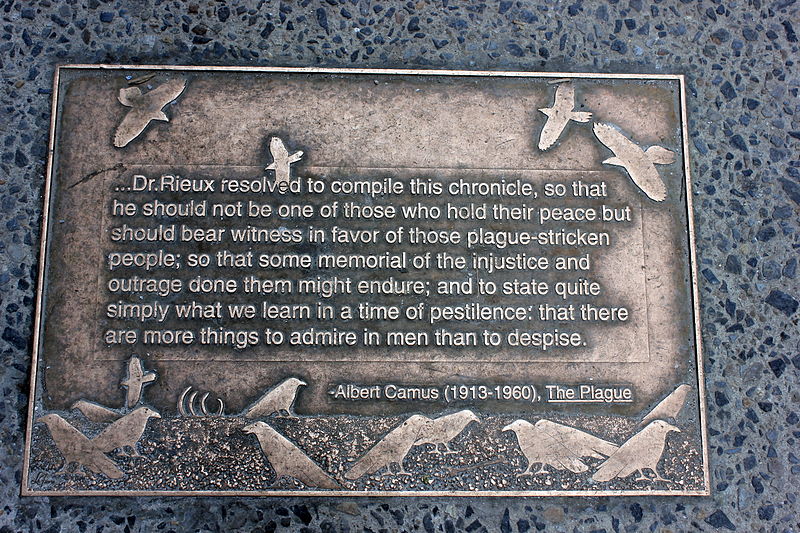 The costume [including the “beaked mask] is usually credited to Charles de Lorme, a physician… He described an outfit that included a coat covered in scented wax, breeches connected to boots, a tucked-in shirt, and a hat and gloves made of goat leather.

Re: “For the duration.” The image is courtesy of For the Duration – Wikipedia, about the 1991 album by Rosemary Clooney, “of songs popular during World War II.”

Re: “Local branch of Keep America Beautiful.” See On “Mad Men” – Revisited, and a prior post cited therein, Whatever happened to … Cassidy?

Re: Why … those strange beaked masks (National Geographic). Here’s the full quote:

In 17th-century Europe, the physicians who tended to plague victims wore a costume that has since taken on sinister overtones: they covered themselves head to toe and wore a mask with a long bird-like beak. The reason behind the beaked plague masks was a misconception about the very nature of the dangerous disease… [The outfit] included a coat covered in scented wax, breeches connected to boots, a tucked-in shirt, and a hat and gloves made of goat leather. Plague doctors also carried a rod that allowed them to poke (or fend off) victims.

Their headgear was particularly unusual: Plague doctors wore spectacles, de Lorme continued, and a mask with a nose “half a foot long, shaped like a beak, filled with perfume with only two holes, one on each side near the nostrils, but that can suffice to breathe and carry along with the air one breathes the impression of the [herbs] enclosed further along in the beak.”

During the 17th-century European plague, physicians wore beaked masks, leather gloves, and long coats in an attempt to fend off the disease. Their iconic and ominous look, as depicted in this 1656 engraving of a Roman doctor, is recognizable to this day.

The “pestilence” quote is from The Plague, Part 1, Vintage International paperback, 1991, originally published 1947, at pages 36-37. See also “Pestilence, one of the Four Horsemen of the Apocalypse.”

The image to the left of the paragraph beginning “So much for that question” is courtesy of Coronavirus Mask – Image Results. The image is accompanied by an article, “Solutions people came up with to try to protect themselves.”

The lower image is courtesy of The Plague – Wikipedia. See also Plague Camus – Image Results, including the article accompanying the “american illiterati” image.