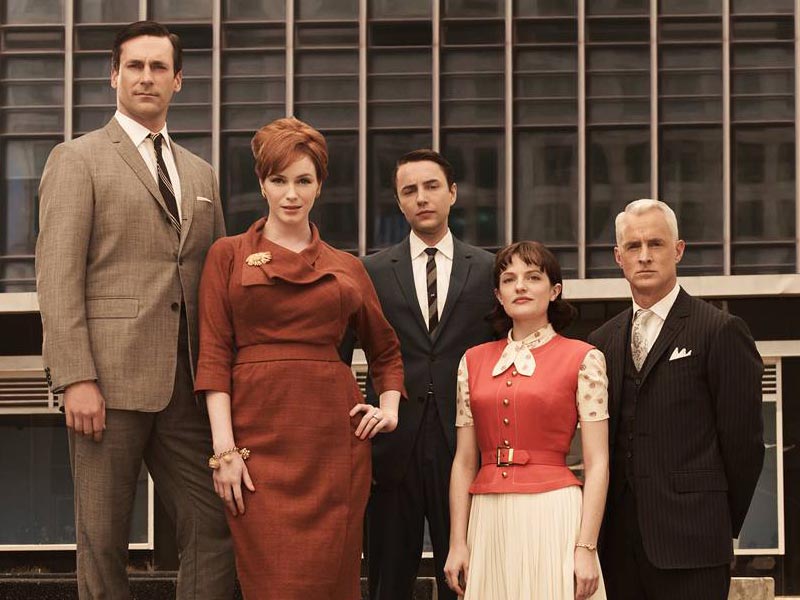 I don’t have cable TV. What I do have is a flat-screen TV and DVD player. And I’m cheap, so most DVDs I view come from the local library. So starting last summer I got hooked on Mad Men, the TV drama “about one of New York’s most prestigious ad agencies at the beginning of the 1960s…”

The series originally ran from 2007 to 2015. It lasted for seven seasons and 92 episodes. The time frame in the series ran from March 1960 to November 1970. Which means it brings back a lot of memories, although I was still in elementary school when that time-frame began.

The early episodes were usually quirky, sometimes funny and sometimes unsettling. Most characters “smoke like chimneys,” and the advertising executives can’t seem to go an hour without visiting each other’s office and offering each other a drink. (“They’re always getting sloshed.”) In another example, one early episode showed Don Draper’s first wife – Betty – visiting a psychiatrist. But later that night the doctor calls Don and goes over the session, nearly word for word, and closes by saying Betty is a “clearly disturbed young woman.”

In another early episode the Drapers go on a picnic. At the end Don finishes his beer and tosses the can off into the distance. And Betty takes the family blanket and nonchalantly shakes it out, leaving the pristine sight now trashed by the family’s garbage. (Did I mention that while emi-retired, I work part-time at the local branch of Keep America Beautiful. See Whatever happened to … Cassidy?)

That little vignette really “got me riled.” (So to speak.)

But the series did get me wondering. I’m 68 now, and a few years back I got hooked on the idea of a “do-over,” going back to high school – for example – and starting over, but armed with all the knowledge I now have about all that’s happened since I graduated. That would be nice I suppose, but it might also have gotten me “burned at the stake.” (Or the functional equivalent of knowing way too much about what happens in the future. “Telephones without wires? Magical cards that you can buy things with? Somebody get the torches and pitchforks!”)

Or as Bonnie Prudden – at left – put it in one of her exercise books: Suppose you could go back in time, but in a way that you knew what was going to happen, but couldn’t do anything to change it? (If you had to go through all the good things and bad you experienced, including all the heartaches you went through “learning life’s lessons.”)

Something like that happened as I started watching Mad Men’s Season 4. Through the magic of the Wiki | Fandom website, I could tell what was going to happen before it happened. But I also knew beforehand that if it was too unsettling or uncomfortable, I could fast-forward through it. (Like the “lipstick on Peggy’s teeth” incident.)

So, would it be nice if we could do that in real life? Know when something bad was going to happen, and be able to “fast forward” through it? Or maybe not. (As it says in Psalm 119:7, “It is good for me that I was afflicted, that I might learn your [God’s] statutes.” I.e., learn life’s lessons.)

Which – in a way – brings up the time I wrote the first draft of this post, last summer after I had gotten back from my May trip to israel. (See “Back from three weeks in Israel.”)

I had just finished watching Episode 6, Season 1, “Babylon.”  It was about the day after Mother’s Day in 1960, at the Sterling Cooper advertising agency. Don Draper,the main protagonist, and his co-workers “meet with executives from the Israeli Board of Tourism to discuss marketing strategies. Don, unsure of what strategy to use, meets Rachel Menken for lunch under the guise of asking her for input because she is Jewish.”

The episode detailed various clandestine meetings between Don and several women – he’s quite the philanderer, through all 92 episodes – including a woman named Midge. 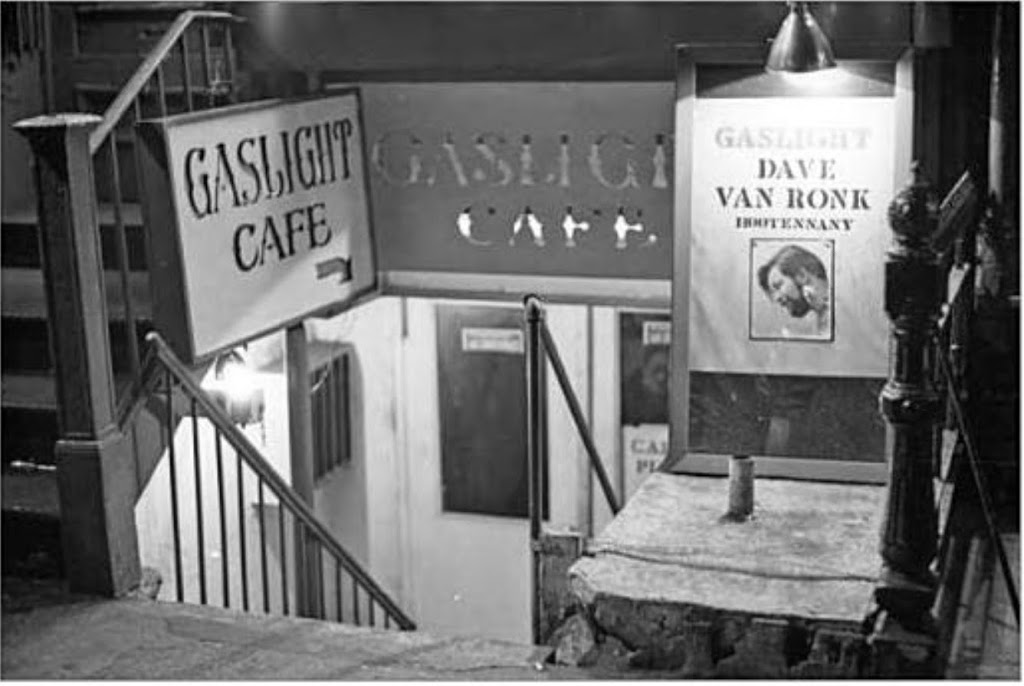 Don, as is his habit, starts to put the moves on Midge at her apartment, but their “bout” is interrupted when Midge’s beatnik friend – Roy – knocks at the door loudly. Awkward introductions follow, with Don sitting on Midge’s bed with his shoes off. A battle of wits follows, both at the apartment and later at the Gaslight Cafe – at right – “to watch Midge’s friend perform.”

Roy – the boyfriend – ridicules Don for the “emptiness of advertising and mass consumption.” In turn, Don ridicules Roy for his youth, “vanity and flightiness.” But their bickering is interrupted when a trio of Midge’s friends take the stage. They start singing a haunting, beautiful song. “By the rivers of Babylon, there we sat down, yea, we wept, when we remembered Zion.”

As indeed it was, verified by the episode link in Mad Men – Wikipedia, which tells of the trio performing “a song about the Jews’ mourning their exile from Zion in Babylon (Psalm 137 as arranged by Philip Hayes).” But the really moving thing was how it affected Don, normally portrayed as the personification of worldly cynicism. And I knew of it because of a post in my companion blog, “If I Forget Thee, Oh Jerusalem.” (Which I posted on April 18, 2019.)

Which brings up the fact that – “through the magic of the Wiki | Fandom” – I now know what happens to Midge. (The lovely young brunette in the picture below.) She finds a new boyfriend, Perry, and he turns her into a heroin addict. She then meets Don outside his new office in “Blowing Smoke,” Episode 12 in Season 4. She is “noticeably skinnier,” and invites him back to her dilapidated apartment to meet Perry, “her husband.” When Midge leaves the room Perry subtly hints that Midge will do “anything” if Don buys one of her paintings. (Saying “the two of them are ‘not possessive’ of one another.”) Don gives Perry 10 dollars to buy groceries, but when he leaves, Midge says “Perry is just going to take the money and ‘put it into his arm.'”

in due course Don leaves the apartment after giving Midge $120 in cash for one of her paintings. (A lot of money in those days.) So maybe it pays not to know too much about the future. Anticipating the first Muhammad Ali vs. Sonny Liston prize fight would have been fun; I could have made a lot of money betting on it. (Except I was only in 7th grade.) But then too I would have known about the Kennedy Assassination coming up – which I lived through again, watching Mad men – and been powerless to stop it. (Except for maybe getting locked up.) 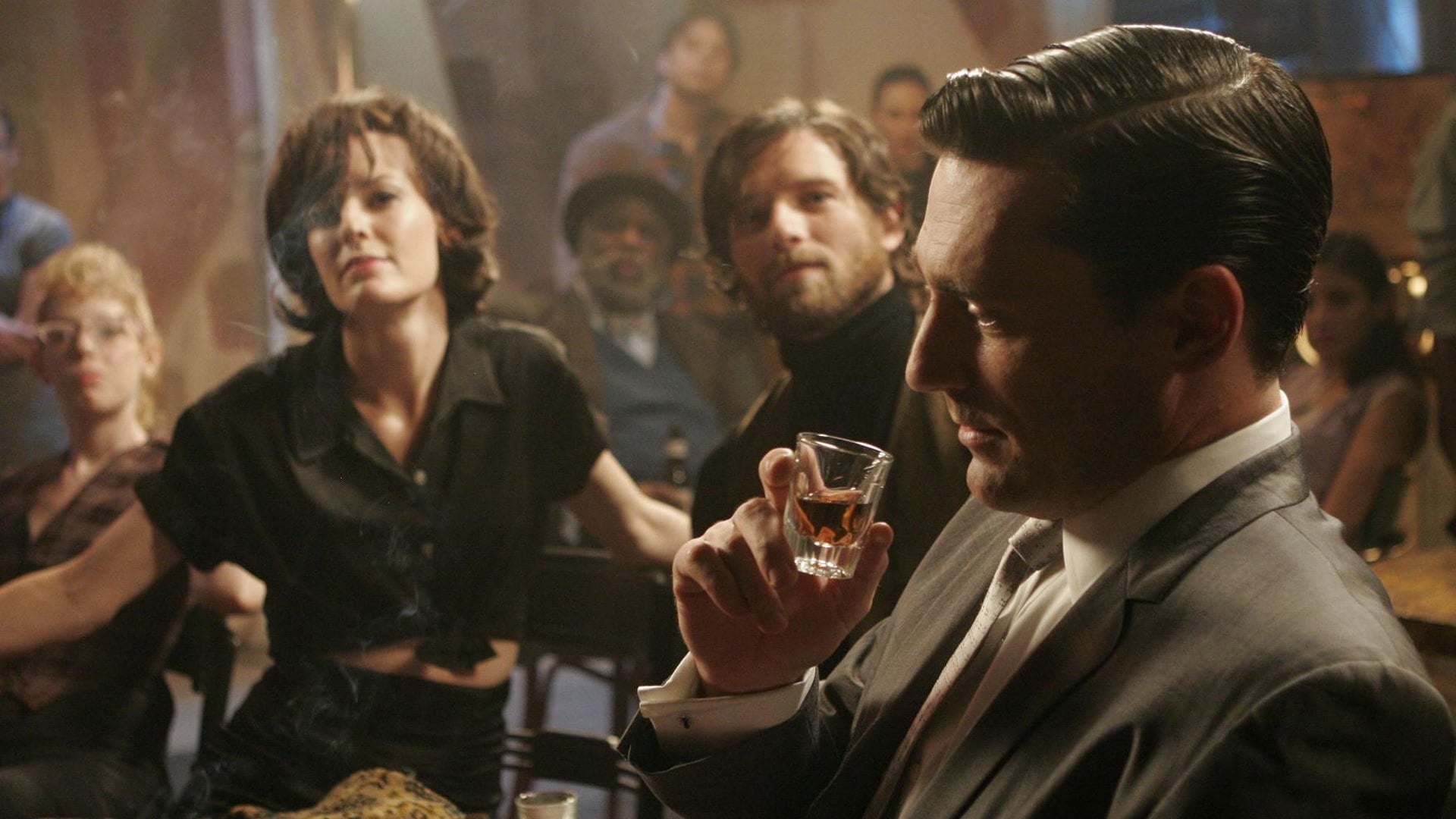