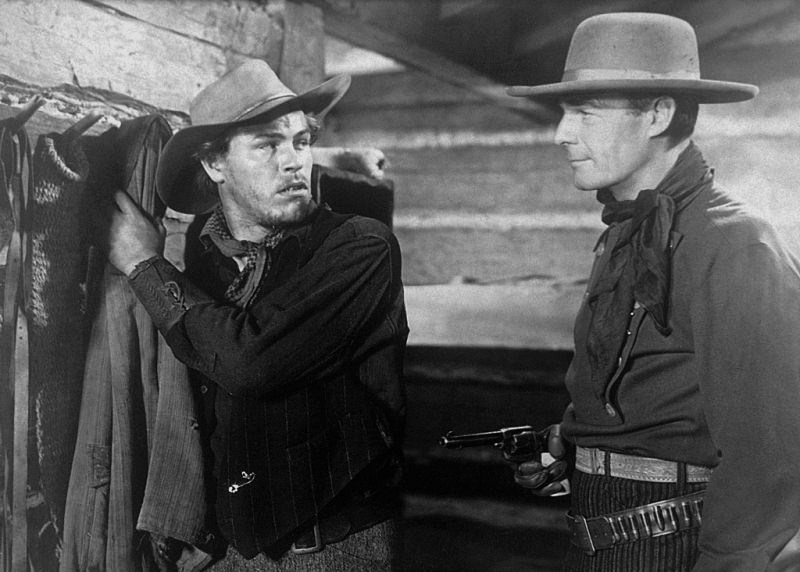 There was a cute young volunteer at the office the other day.  (At the local Keep America Beautiful, where I work off and on as a supervisor.)   Her name was Cassidy.

So when the Big Boss Man called her “hopalong,” I got a bit confused.

I assumed that maybe – when she put her bag behind the office table –  she’d done a little hop. Or maybe she’d had a limp the day before.  But later – working at the recycle bins – it hit me.  So I asked her about the nickname and she said, “Oh yeah, that’s what a lot of old guys call me!”

I then asked if she knew who “Hopalong Cassidy” was.  She didn’t, so I got out my trusty smartphone – or a reasonable facsimile – and showed her the Wikipedia article, complete with pictures.  (Including the early “rough around the edges” version, by Frank Schoonover, at right.  It’s Hopalong Takes Command, “for the 1905 story ‘Fight at Buckskin.'”)

But that little episode set in motion a whole set of trains of thought. (Or more precisely, train-lines of free association.)

Those queries also include – but aren’t limited to – whatever happened to Randolph Scott, Lash LaRue, Johnny Mack Brown, or for that matter, Gene Autry.  For one short answer, check sites like 10 Best Old Cowboy Movies, or Famous Old Western Actors, both courtesy of the Screen Junkies website.  Or you could check 16 Best Western Movies | The Art of Manliness, for more on the ongoing appeal of those old-time cowboys.   That short answer?

Few figures in history have had as powerful an impact on American masculinity as the cowboy.  For over a century, the cowboy has — for better or for worse — been a standard of rugged individualism and stoic bravery for the American male.  While the mythologization of the American cowboy began all the way back in the 1880s … it wasn’t until the advent of twentieth century cinema that the cowboy cemented his place as an icon of manliness.

Then too, through the magic of hyperlinks, you can check for yourself what happened to Randolph Scott, Lash LaRue, Johnny Mack Brown, or Gene Autry.  (As shown at right.)

But we were talking about “Hopalong Cassidy.”  (“Hoppy,” for short.)

Clarence E. Mulford created Hoppy in 1904.  And in the original version, he was portrayed as “rude, dangerous, and rough-talking.”

(Not uniike Bugs Bunny or Woody Woodpecker.  Bugs was originally “loud, zany with a goofy, guttural laugh” and a “hayseed voice.”  But in later versions he was shown as “cool, graceful, and controlled.”  Woody too went on to “evolve over the years, from an insane bird with an unusually garish design to a more refined looking and acting character.”)

Be that as it may, in the movie version played by William Boyd – starting in 1935 – Hopalong Cassidy too was transformed into a clean-cut hero.  (As shown in the bottom image.)

…white-haired Bill “Hopalong” Cassidy was usually clad strikingly in black (including his hat, an exception to the western film stereotype that only villains wore black hats).  He was reserved and well spoken, with a sense of fair play…  “Hoppy” and his white horse, Topper, usually traveled through the west with two companions – one young and trouble-prone with a weakness for damsels in distress, the other older, comically awkward and outspoken.

Incidentally, George Reeves – who later played Superman – was one of those who played the “young and trouble-prone” sidekick.  And among those who played the older man – “comically awkward and outspoken” – was Gabby Hayes.  (Seen at left, he played Hoppy’s original “grizzled sidekick, ‘Windy Halliday.'”)   But Hayes left because of a salary dispute…

Also incidentally, Hayes went on to a long career as a movie sidekick.  He made 44 movies with Roy Rogers, 15 with John Wayne – “some as straight or villainous characters” – seven with Gene Autry and six with Randolph Scott:

Hayes, in real life an intelligent, well groomed and articulate man, was cast as a grizzled codger who uttered phrases such as “consarn it,” “yer durn tootin’,” “dadgummit,” “durn persnickety female,” and “young whippersnapper.”

But once again we digress.  We were talking about William Boyd, and about Cassidy, “Hopalong” or otherwise.  Boyd was born in 1895 and died in 1972.  The Boyd link too noted that Hoppy’s character changed drastically from the book to film versions:  “from a hard-drinking, rough-living wrangler to its eventual incarnation as a cowboy hero who did not smoke, swear, or drink alcohol (his drink of choice being sarsaparilla)…”

Then too, Boyd made the then-radical transition from movies to television.  When Hollywood branded him a “washed-up cowboy star” in 1948, Boyd made a desperate gamble.  He bought the movie rights, which set the stage for his moving to the new – and untested – TV format:

Married five times, Boyd retired from acting in 1953.  He invested in real estate and “moved to Palm Desert, California.  He refused interviews and photographs in later years, preferring not to disillusion his millions of fans who remembered him as their screen idol.”

Which I suppose could be an object lesson for some of today’s actors and sports figures, who play past their prime.  But in closing, let’s get back to “Cassidy.” 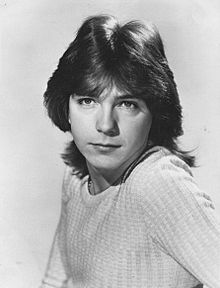 Cassidy – as a first name especially – comes from the Irish and means “clever.”  (Or “curly-haired,” from the Gaelic Caiside.)  It first appeared “among the 1,000 most-popular names for American girls in 1981,” and reached a peak of popularity in 1999.  (When it was “the 99th most popular name for American girls.”)

And Wikipedia noted that “Cassidy may have become a first name due to baby-boomer parents naming their children after ’70s teen idol David Cassidy.  (Seen at right, or perhaps “the Grateful Dead song, ‘Cassidy.'”)

So here’s a newsflash for all those coming-of-age young ladies named Cassidy.  And who were given that name by baby-boomer parents  (And – most likely – by baby-boomer mothers who had the hots – when young – for David Cassidy.)

Now you know why all those old guys call you “Hopalong…”

The upper image is courtesy of Randolph Scott – Wikipedia, the free encyclopedia.  The caption:  “With Jack Lambert in Abilene Town, 1946.”

Also re: Randolph Scott.  Like Boyd, Scott retired – at age 64 – a  wealthy man.  Through “shrewd investments throughout his life,” he eventually accumulated “a fortune worth a reputed $100 million, with holdings in real estate, gas, oil wells, and securities.”  But neither “Randolph” nor “Scott” became associated with a teen idol, who later gave a name to a generation of baby-boomers.

Note also Cassidy (as a surname).  That common Irish surname translates to “descendent of Caiside,” a family from “County Fermanagh.  The Caisides were originally a medical family, who were hereditary physicians to the Maguires.”  The Maguires are also from County Fermanagh, but that surname is uncommon, and said to descend from “Cormac mac Airt, monarch of Ireland about the middle of the third century.”