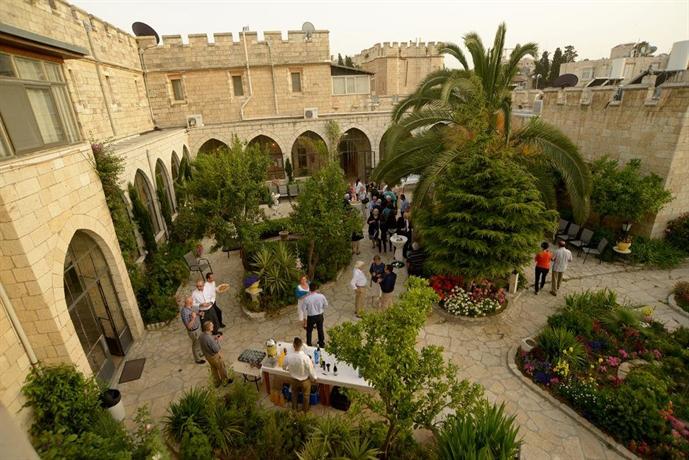 And while I got back home on May 29, since then I’ve been preparing for a two-week road trip, up to Massachusetts, for my niece’s wedding, in June.  I’ve also posted My first full day in Jerusalem, in my companion blog.  (About the trials and tribulations of that first day of my pilgrimage, which included hearing a mysterious “explosion” at 4:08 on the morning of Sunday, May 12.)

This post will focus on my last day in Israel.  (In Tel Aviv, where I got lost walking, took the wrong train, and later spent some 26 hours straight without sleep before finally getting home to the ATL.)

This pilgrimage was part of a course given by St. George’s College, Jerusalem, the “Palestine of Jesus.”   And a side note:  For visits to many churches and all Muslim areas in Jerusalem, you’re expected to “dress modestly.” Ladies showing bare knees get brown frumpy skirts to cover the “limbs” from hip to below the ankle.

The Jerusalem experience was wonderful, overwhelming, intimidating and enlightening.  But like I said, let’s start with the most recent “cluster” (half a word) part.  It came on Wednesday, May 29, the day I spent 11 hours flying back home.  (And considering the time change, 26 hours straight without sleep before I got back home.)

The problem was: I got all cocky from the day before, when I’d made an easy connection from Jerusalem to Tel Aviv.  (On Monday the 28th.)  After parting ways with the other pilgrims in my church group, I made a fairly-easy two-mile trek from the College to the central bus station in Jerusalem.  (Lugging 30 pounds in a back-pack and large gym-bag to be checked at the airport.)  From the Tel Aviv bus station I hiked a “mere” mile, to my night’s lodging at “Yavne 26.”  (They list the street number last.)  On the way I managed a visit to the Haganah Museum, right around the corner from Yavne 26, at “Rothschild Boulevard 23.”

Later that evening I managed to hook up with eight or nine fellow pilgrims from Georgia. Unbeknownst to me they were staying at the Abraham Hostel in Tel Aviv, two or three blocks from my place on Yavne 26. They were headed to an extra added attraction, a side trip to Petra, in Jordon, that country’s “most-visited tourist attraction.” And here’s something I didn’t know. Google Maps has it as between 274 to 303 miles from Jerusalem to Petra, but there’s no direct route. From Tel Aviv they say it’s 297 miles, which explains why my fellow pilgrims traveling there had to end up in Tel Aviv for the evening of May 28.

I ended up finding the eight or nine fellow pilgrims at a restaurant around the corner from Abraham’s Hostel. I had to do that – search for them – because the guy at the front desk wouldn’t take a message, let alone make contact. So I checked the local eateries, and found them just across the street.

I ended up at the bar in the basement at Abraham’s, but my visit was cut short because I was all hyped up to get to Ben Gurion airport early enough to get through the vaunted Israeli airport security.  All the guides said you should get to the airport at least three hours ahead of time. Since my flight was at 9:55 a.m., I figured I should be at the airport by 6:55 a.m.

Another side note: Gentlemen who wear shorts – or otherwise show their knees at “many churches and all Muslim areas in the city” – are also given “skirts.”  (Like the two dumbasses in a photo I took but got “erased” some time after posting.)

So anyway, to get to the airport on time, I got up at 4:00 a.m. and started hiking back to the Haganah train station on Levinsky Street.  (Where I’d just hiked up the previous day.)  But I missed the intersection – “wool-gathering” I suppose – and had to double back.  As it turned out I hiked an hour – with the same 30 pounds of baggage – but got to the train station right about six a.m.

Then the real trouble started…

I got a ticket easily, but only after gashing my left forearm.  (I was rushing to “unpack” at yet another security check-point, just inside the train-station entrance.)  To make the lugging easier I’d tied together the upper arm straps of my pack with a knotted handkerchief, but after a sweaty hour’s walk it got “un-tieable.”  So to get the pack off I had to lift it up over my head, and in the process gashed my forearm.  And got blood all over the upper-leg portion of my jeans.  (I could just hear Israeli security:  “And where have you been to get all that blood all over you?”)

Then I got on the wrong train.  It was on Platform 3, like the ticket guy said, but it ended up going the wrong direction.  The train I got on – at the wrong time, it turned out – went to Lod.  That’s a beautiful city 9.3 miles southeast of Tel Aviv, but it’s not the Ben Gurion airport.

Once I found that out – after finding someone who spoke English – it seemed like forever to get back to the central station.  On the way a friendly uniformed Israeli suggested I take a taxi from the central station; about 65 shekels, or 22 dollars.  I was all set to do that, but getting off the train another Israeli – in blue jeans and flip-flops – fell down right behind me, missing the first step down.  I helped him up and asked if he was all right.  Then he asked if I was trying to get to the airport.  (He probably overheard my plaintive cries for directions somewhere along the way.)

He helped me get on the right train, the 7:09 going in the right direction, so I suppose there’s a lesson there.  Then while waiting for the 7:09 train, two lovely young Israelis in brown uniforms sat next to me while we waited.  (Incidentally, I’d done a lot of praying on the train to and from Lod.)  Then the 7:09 got delayed an extra six or seven minutes, so I got to enjoy their company even longer.  (Another note:  Tel Aviv in general was a nice change from Jerusalem, appreciating-the-opposite-sex-wise.  I.e., there were fewer women all covered up with burkas and such.)

That pleasant “accompaniment” wouldn’t have happened if I hadn’t gotten on the wrong train, going the wrong direction, so I suppose there’s a spiritual object lesson lesson there too…

The end result was that despite getting to the airport at 7:35 a.m. – instead of 6:55 like I should have – I got through the numerous layers of the “vaunted Israeli airport security” in plenty of time to get to Gate C-6.  (I had time to relax for 30 or 40 minutes, and finally have some breakfast:  Mango juice and a “lox” croissant.)  And to remember the time I’d just spent in the company of two lovely Israeli Female Soldiers.  (Not unlike the one shown below, from 1948.)

I’ll be writing more – lots more – on other lessons learned (and experiences experienced) from my pilgrimage to Israel.  But for now it’s enough to enjoy the comforts of home once again.  Here, on the functional equivalent of “my own back doorsteps,” I can – a la  John Steinbeck – finally come to think about all I’ve seen in the last three weeks, then “try to arrange some pattern of thought to accommodate the teeming crowds of my seeing and hearing.”  In other words, to make some sense of all I’ve seen, heard and experienced those last three weeks.

At least until my next pilgrimage, to the Camino Portugues in September… 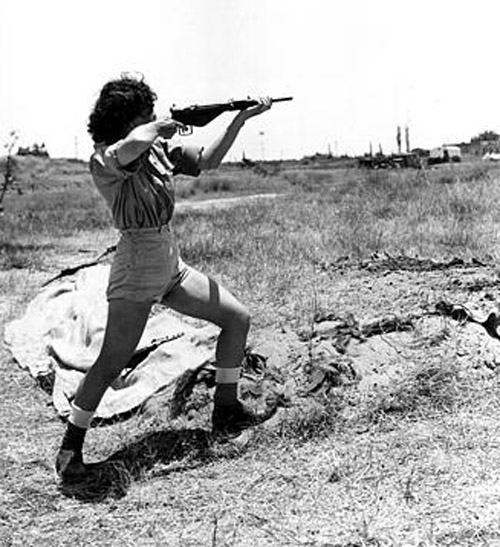 The upper image is courtesy of St. George’s College Jerusalem Israel – Image Results.  See also Home | Saint George’s College Jerusalem for more on available courses and staff members.  The course in question was “The Palestine of Jesus.”  (See the link at “Home” page.)  Another note: This post is substantially similar to the one on my “spiritual” blog, DOR Scribe – Expand your horizons…

Re: Taybeh.  See Taybeh Brewery – Wikipedia, on the “Palestinian brewery founded in 1994[, at] the West Bank village of Taybeh,” 22 miles north of Jerusalem.  “It produced its first beer in 1995 and has since developed a global following.  It is the first microbrewery in the Middle East.”  The other beer available to St. George pilgrims is “Maccabee,” brewed by Tempo Beer Industries:  “Maccabee (Hebrew: מכבי‎) is a 4.9% ABV pale lager that was first brewed in 1968.  It is distributed in Israel and is also marketed in the United States and Europe.”  I found Maccabee on draft at the LEONARDO MORIA CLASSIC HOTEL, Jerusalem 9 Georges St., a mere four-minute walk from St. George’s.

Re:  Cover-leg skirts.  Ladies are also cautioned not to have bare shoulders or visible cleavage.

Re:  “Vaunted airport security.”  The link is to What To Expect At Israel’s Airport Security. | Bemused Backpacker.  See also Leaving Tel Aviv: My Experience Through Airport Security, or Google “vaunted Israeli airport security.”  Also, I found out the next  morning – Thursday the 30th, at home – that Lod is actually pretty close to Ben Gurion airport.  It’s a little over two miles as the crow flies, but walking the route involves “restricted usage or private roads.”  See also Lod Airport massacre – Wikipedia, about the “terrorist attack [on] May 30, 1972, in which three members of the Japanese Red Army … attacked Lod Airport (now Ben Gurion International Airport) near Tel Aviv.”

Yet another note:  “Wadie Haddad, the primary organizer of the attack, was assassinated by Mossad in early 1978.”  (Those guys don’t fool around.)

Re:  “Pleasant accompaniment.”  In the sense of “something incidental or added for ornament, symmetry, etc.”  See Definition of Accompaniment at Dictionary.com.  The image is courtesy of Israeli Female Soldier – Image Results.

The Steinbeck reference is to the Penguin Books paperback version of Travels with Charley:  In search of America, detailing his 1960 road trip travelogue, at pages 108-109.  He described the feeling – “like constipation” – of being overwhelmed by his experiences, as in going to the “Uffizi in Florence [or] the Louvre in Paris.”  In yet another memorable passage he made an apt comparison:

Maybe understanding is only possible after.  Years ago when I used to work in the woods it was said of lumber men that they did their logging in the whorehouse and their sex in the woods.  So I have to find my way through the exploding production lines of the Middle West while sitting alone beside a lake in northern Michigan. [Emphasis added.]

Re:  The Camino Portugués, also called the “Portuguese Way.”  It’s the collective name of the “Camino de Santiago pilgrimage routes starting in Portugal,” beginning in either Porto or Lisbon.  (My companions and I will be starting in Porto.)  As Wikipedia noted, the Portuguese Way is the “second most popular route after the French Way,” which my Utah brother and I hiked-and-biked in 2017.  See – from October and December, 2017 – “Hola! Buen Camino!” – Revisited, and “Buen Camino!” – The Good Parts.  A review of the posts shows that some of my pictures got  “screwed up…”  But they’re still good for reference and informational purposes.

The lower image is courtesy of Haganah – Wikipedia.  Caption:  “Haganah female officer in 1948.”  For more on the topic, Google “Israeli women soldiers brown uniform.”  That led me to sites like Pictures of Israeli Female Soldiers In and Out of Uniform, Israeli female soldiers are not afraid to reveal their assets, and 18 Pics Of Hot Israeli Army Girls IDF | Female Supermodel.