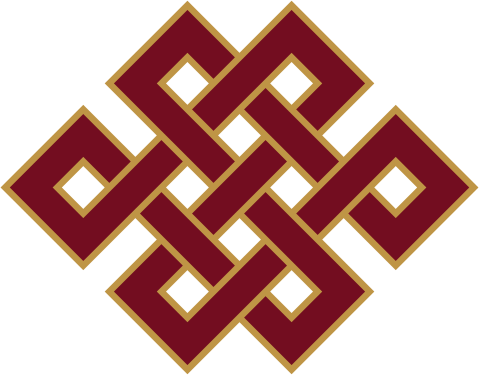 The “Endless Knot,” a great metaphor for spam…

I’ve written before about the advantages of blogging.  Advantages over the kind of “delightfully retro” format that Harry Golden had to use in his Carolina Israelite.  (See ABOUT THE BLOG.)

Things like links, along with full-color pictures and “flashy graphics.”

But now it’s time to write about some of the disadvantages.  One of the biggest disadvantages of blogging is spam, masquerading as “comments.” (Along with the possibility of being hacked.)

For one thing, the Metro Area is all in a hubbub about “icy Arctic blasts,” courtesy of the winter storms threatening most of the Eastern seaboard.  On a more personal note, I just tried to log in to my other blog.  But I couldn’t, because it was “temporarily disabled.”

It was temporarily disabled, because someone tried to hack into it.

That led me to work on this blog.  Unfortunately, my personal Muse – exemplified by the one at right – was no help whatsoever.

I found 427 comments.  Unfortunately, most of them were spam.

When I first started my other blog, the first thing I did each day was go to the “Comments” section there.  And there I’d mass-delete the latest batch of spam, most of it having to do with “Babyliss.”

Just as an aside, “Babyliss” is apparently a division of the Conair Corporation.  (See Wikipedia.)

That led me to web articles including We Can’t Get Rid Of Spam – Forbes.  That in turn led me to remember the Apostle Paul’s experience with his own particular “thorn in the side.”

(In the alternative, his “thorn in the flesh.”)

The article thorn in the flesh explained that today the phrase “is a colloquialism used to describe a chronic infirmity, annoyance, or trouble in one’s life.”

The article also noted the phrase is “commonly used by Christians,” and refers to 2 Corinthians 12:7.  This was right after Paul wrote about some his visions and revelations, which led him in turn to talk about his “boasting.”  (“I have plenty to boast about … but I don’t want anyone to think more highly of me than he should.”)  Which led to this passage:

To keep me from becoming conceited because of the exceptional nature of these revelations, a thorn was given to me and placed in my body.  It was Satan’s messenger to keep on tormenting me so that I would not become conceited. (E.A.)

Wikipedia noted that Paul – at left – didn’t specify the nature of his physical “thorn in the flesh.”  It also noted that through the centuries, “Christians have speculated about what Paul referred to.”

On the other hand, if Paul had lived in modern times and tried to advance his message through a blog like this, he may very well have been referring to that *&%*@% spam that keeps coming back like a bad case of [fill in the blank with the expletive of your choice]!!!

This thorn in the flesh that Paul mentioned has been used and misused by Christians to justify submitting to nearly any problem that comes along.  Satan has twisted this passage of Scripture to deceive many, many people into believing that God would not heal Paul, so how can they expect to be healed?  Let us examine this closely and find out exactly what Paul’s thorn in the flesh was.

More to the point is the concept of Karma.  See Wikipedia, which defined it as the action, work or deed of an individual, or “the principle of causality where intent and actions of an individual influence the future of that individual.”  (In the alternative, “the sum of a person’s actions in this and previous states of existence, viewed as deciding their fate in future existences.”)

All that led me to think maybe all that spam was some strange punishment for my past sins.  In the alternative I had the good Christian thought that  maybe some of this spam presented an opportunity to “entertain angels unaware.”  But these days – having been victimized by thousands upon thousands of unsolicited “spams” – my attitude has hardened.

I now I fully agree with the words of Mister Kurtz, in the novel Heart of Darkness:

“The horror, the horror…   Exterminate all the brutes!!” The upper image is courtesy of Endless knot – Wikipedia.  The caption:  “One common form of the Endless Knot.”  On the matter of spam, see also Unsolicited Bulk Email: Definitions and Problems.

The “muse” image is courtesy of Muse – Wikipedia.  The caption:  “Polyhymnia, the Muse of sacred poetry, sacred hymn and eloquence as well as agriculture and pantomime.”

Re: “Angels unaware.”  That’s from the King James translation of Hebrews 13:2.

The “Paul” image is courtesy of the Paul the Apostle link in the “thorn” article.  The caption:  “Paul the Apostle, by Rembrandt Harmensz van Rijn c. 1657.”

The lower image is courtesy of “www.studentpulse.com/article-images/uploaded/348_1.jpg.”  See also Kurtz (Heart of Darkness) – Wikipedia, and In Heart of Darkness, what does Kurtz mean by his final words …    (Mister Kurtz was a central character in Joseph Conrad’s novel.)

Note that this post is an updated version of one originally published on my other blog, in September 2014, On “babyliss,” a thorn in the side – and maybe karma.