Here’s a review of The Revenant, the 2015 “frontier revenge film.”  It’s set in 1823, in what later became the states of Montana and South Dakota.  The film – with Leonardo DiCaprio in the lead role – was “inspired by the experiences of frontiersman and fur trapper Hugh Glass.”

In a word, the film is intense.  But perhaps the best summary came from the first line of the Rolling Stone review.  (Which you’ll have to look up, on account of “we” are trying to be a class act here.  And a BTW:  “Brutal” is another good one-word description.)

Suffice it to say the film features breath-taking winter photography of the American West, “before the coming of the White Man.”  (In the words of The Hollywood Reporter, “brutal realism and extravagant visual poetry.”)  But that Ode To Beauty is interspersed with graphic images of the savagery it took to actually survive in that wilderness.

And in what could be a related note:  “In European folklore, a revenant is a corpse that has returned from the grave to terrorize the living.” (See Revenant (disambiguation) – Wikipedia.)

That’s another good way to sum up the movie. 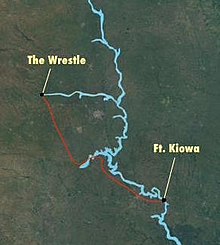 More to the point, the real-life Hugh Glass was called the revenant “from the 19th century French verb revenant, meaning someone who returns from a long absence, or a person or thing reborn.”  The nickname came after his epic 200-mile journey – in the dead of winter, down the Cheyenne River to Ft. Kiowa, shown at left – after being mauied by a momma Grizzly.

And speaking of a Man in the Wilderness, that was the 1971 film with a variation on the theme of basically the same story.

That film too was “loosely based on the life of Hugh Glass.”  It featured Richard Harris as “Zachary Bass” – not “Hugh Glass” – and John Huston as Captain Henry.  (See also Man in the Wilderness – Wikipedia.)  Captain Henry – the “hunting party leader” – showed up in both films. But Huston’s portrayal – of Henry as demented nemesis – was more like his role as Noah Cross in Chinatown.  In Revenant, the Captain is good-hearted but much too willing to trust…

Which is another way of saying the bad guys in Revenant are “Thomas Fitzgerald” and a youthful Jim Bridger.  Bridger went on to become one of the “foremost mountain men, trappers, scouts and guides who explored and trapped the Western United States.”  But in the 1823 expedition he was an “unwitting dupe” to Fitzgerald’s scheming and treachery.

Tom Hardy was admirable as Fitzgerald. (Shown at right.)  He’s the type of loudmouth, self-seeking blowhard who seems to plague every all-male gathering. (Or “hunting party” for that matter.)

Another note:  In various reviews there seemed to be some confusion between Thomas Fitzgerald and Thomas Fitzpatrick.  (The latter was known as (the) “Broken Hand,” from a firearms accident that mangled his left hand.)

So anyway, throughout the movie Fitzgerald constantly complains, badmouths, and is a general – and genuine – “PITA.”  For example, he’s the first to suggest killing Glass outright.  (After Glass was graphically mauled by a mother Grizzly Bear protecting her cubs.)

That’s because the company of hunter-trappers got ambushed by Arikara warriors to start the film.  As a result, some 16 of the 24 men in the hunting party got killed and/or scalped.  (Also shown graphically in the film.  The survivors’ escape is shown below left.)

In turn, Glass’s injuries threatened to slow down the whole group, trying to escape further death at the hands of the Arikara.  And by the way, the film-Fitzgerald wore that bandana-like thing on his head because he’d been partially scalped.  (In an earlier run-in with another band of Indians.  And in an ode to karma, the job gets finished at the end of the film, “and deservedly so.”)

And speaking of gore, the film goes to great lengths to illustrate what Glass actually had to put himself through in order to survive.  (From both the harsh winter conditions and his injuries.)

For example, in one scene, “Glass” slits open a just-dead Indian pony, pulls out the entrails and crawls inside – naked – to keep from freezing.  (After yet another near-escape from death.)  In another sequence, Glass has to cauterize a still-open bleeding wound in his throat.  He applied gunpowder to the wound, then lit-it-to-explosion with some burning brush.  Which brings up the fact that for much of the movie, DiCaprio‘s dialog consisted of grunts and screams.  (And deservedly so…)

And aside from all that, they kidnapped the daughter of the Arikara chief.

Which brings up another gory scene.  Glass sneaks up behind one of the Frenchmen – raping the Ree maiden from behind – and slits his throat.  (“And deservedly so.”)  The girl ran one way through the snow, and Glass – on a stolen horse – galloped away in another direction.  But of course “we” knew she’d reappear in a later scene, and so she did.  (At the end of the movie, on variations of:  1) The enemy of my enemy is my friend;  2) Karma; and  3) Poetic justice.)

The long and short of it is that the story of Hugh Glass is a timeless classic, as shown by the 1922 newspaper feature shown below.  (Illustrated by Charles M. Russell.)  But unfortunately it’s not for everyone.  On the other hand, it provides a much-needed message to all the whiners, complainers, back-stabbers, badmouths, and blowhards who seem so prevalent today: 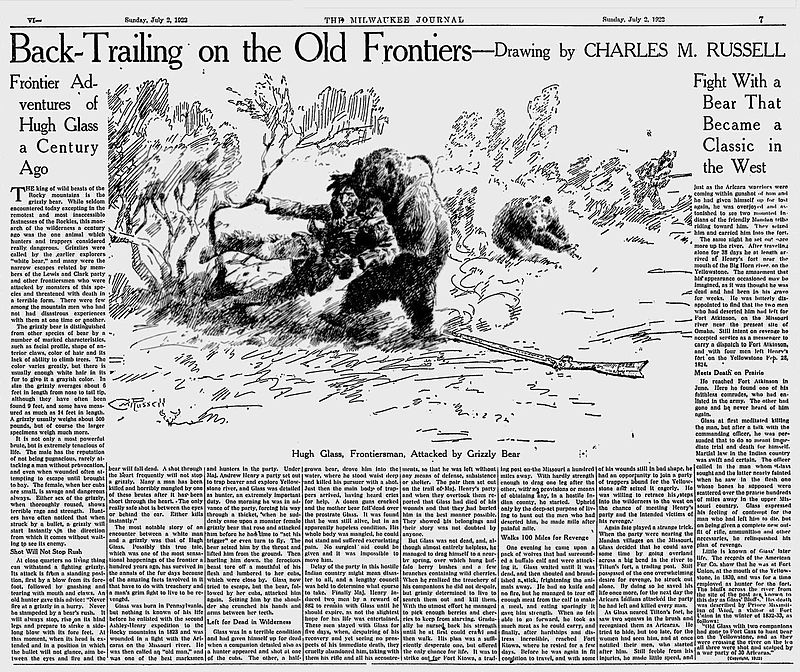 The upper image is courtesy of The Revenant (2015) Movie Photos and Stills – Fandango.  (As are the images of Tom Fitzgerald – Tom Hardy – and the hunter-trappers escaping across a creek, with DiCaprio in the middle, carrying a wounded man in a Fireman’s carry.)

The second-down (DeCaprio) image is courtesy of  ‘The Revenant’ Movie Review | Rolling Stone.  The caption:  “Leonardo DiCaprio in ‘The Revenant.’ (Kimberly French).”

Re:  “Brutal realism and extravagant visual poetry.”  Those were Todd McCarthy’s words, in his Hollywood Reporter review.  See The Revenant Reviews | Movies.com.

Re:  Jim Bridger.  As noted, Hugh Glass ultimately forgave Bridger for his part in the 1823 matter, largely because he was so young.   In the winter of 1824-1825, Bridger went on to gain fame as the first European American to see the Great Salt Lake.  He was also “among the first white men to see the geysers and other natural wonders of the Yellowstone region.”  And in 1830, Bridger and some other trappers “established the Rocky Mountain Fur Company, competing with the Hudson’s Bay Company and John Jacob Astor‘s American Fur Company for the lucrative beaver pelt trade.”  He remained active – serving as Army scout and guide – until 1865.

Re: The estimate of men killed in the initial film-ambush.  The sentence as originally written said “some two-thirds of the ‘white men’ were killed and/or scalped.”  But I felt that “neutral” phrasing didn’t do justice to the actual situation.  (Of a great number of American men killed.)  So I searched the Internet for the actual number of men in the hunting party, to no avail.  As an alternative, I counted the number of men in the “survivors’ escape” photo, added two, and multiplied by three.

Re: “Walk it off, Nancy!”  A variation on that theme is “Get off your pity pot, Nancy!”  Walk it off generally means to deal with a “negative emotional event without complaint; to take it like a man.” According to the Urban Dictionary, “pity pot” is a euphemism for generally “feeling really sorry for oneself.”  As to “Nancy,” that term is used “as a disparaging term for an effeminate man.”  (In other words, a man who couldn’t have done what Hugh Glass did.)  See also “nancy boy,” and “negative Nancy,” for similar disparaging terms apropos to a review of The Revenant.

The lower image is courtesy of the Hugh Glass link in the article, The Revenant (2015 film) – Wikipedia.

And incidentally, the director of The Revenant – Alejandro González Iñárritu  – won three Oscars in 2014, for directing, writing, and producing “Birdman.”  See my review at On “Birdman,” the movie.

For another good review see Hugh Glass, the Real Man of “The Revenant” Movie.  It identified Glass’s nemesis as “John Fitzgerald,” but also asked the rhetorical question, “Have we become a nation of wusses?”  I.e., some of the film crew walked off the set because of the difficult conditions:

Behind the scenes, DiCaprio has told media outlets the remote locations and frigid temperatures – the movie was film only in natural light during winter – was one of the most difficult films he has done.  Those same factors led some crewmembers to walk off the set. Which begs the questions: have we modern-day Americans lost our ability to rough it in the wild?

I took the liberty of translating “our ability to rough it in the wild” to the more-direct question: “Have we become a nation of wusses?”  For one answer see Canoeing 12 miles offshore.