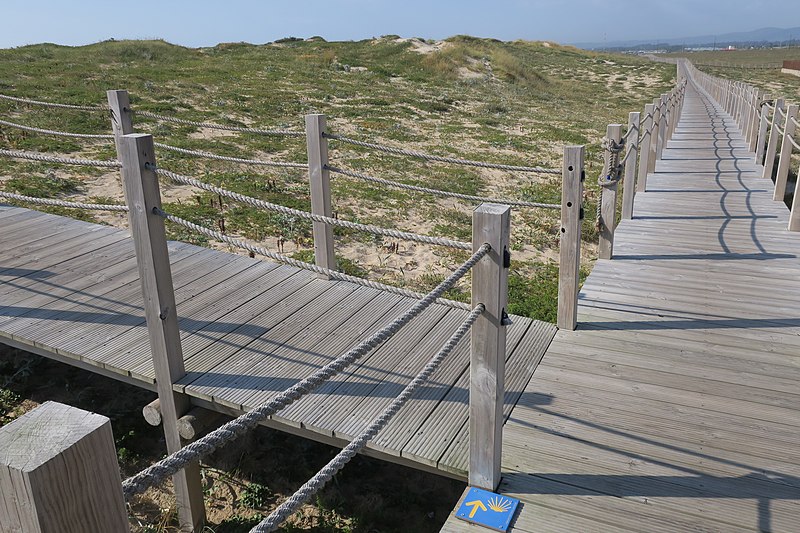 I’m putting together a new book, “(Some of) My Adventures in Old Age.”

I’ll describe some of my adventures, from back when it was possible to travel and have such adventures. I’ll end the book with my last overseas adventure, from September 2019. That’s when I hiked the Portuguese Camino from Porto “back up” to Santiago de Compostela. (I hiked and biked the French Way – from Pamplona to Santiago – with my brother in 2017.)

Which led me to the last post I actually did on the trip. Back in October, 2019, I posted   “Greetings from the Portuguese Camino.” But that post only got as far as Ponte de Lima: “We started out on the Coastal Route after Porto, then shunted over to the Inland Route. There – among other rivers – we crossed the Lima River at Ponte de Lima.” Since Google Maps has the distance from Porto to Ponte de Lima as 51 miles or so, and since they had the distance from Porto to Santiago de Compostela as 153 miles, that meant I only covered a third of the hike.

Which is why I ended the Greetings post with this: “I’ll be writing more about our Portuguese Camino adventure, but in the meantime: The good memories weren’t just limited to Cruzcampo, Sagres, Mahou and Super Bock…” (Four Portuguese beers.) But I also wrote about the trip in my companion blog. I called it  Just got back – Portuguese Camino, and started off with the same “boy are my arms tired” schtick as the  “Greetings” post:

I just flew back from Lisbon in Portugal. “And, boy, are my arms tired!” But seriously, I did just finish a 160-mile hike* on the Portuguese Camino. I flew to Lisbon on August 28 and flew back [home] on September 25, and so technically was gone a full month.

I had some notes on flying into Lisbon and getting to my hotel room. “Another red-eye flight, just like the one I made to Tel Aviv and Israel last May.” I also learned early on that – as far as Lisbon goes – the internet lied about cheap Portuguese taxis. (Bonjour!)  Instead of a four-Euro ride to my hotel – as I’d been led to believe – it was more like 15 Euros. Which wasn’t that bad, for one ride anyway. But luckily I hooked up with the Lisbon Metro.

I took the Red Line Metro train from “Aeroporto” station and got off at Saldanha station. My “Hotel Alif” was right across from Campo Pequeno. It’s a famous bull ring togged out like one of our football stadiums, but with lots of restaurants open on weekdays. It’s circular, with the bull-ring in the middle, and all around the perimeter they have restaurants, along with stairs, restrooms and the like. Much like our football or baseball stadiums. (That first day I got yelled at for cutting through one of the restaurants, getting acquainted with the area. Next night I went back to that restaurant for dinner and got served by the same waiter. He seemed a lot nicer then.)

Also next day – Friday, August 30 – I did some touristy stuff, including a visit to the Padrão dos Descobrimentos (“Monument to the Discoveries”). That’s been a lifelong dream, or at least it has been since 1979, when I made my first trip to Europe and couldn’t make it to Lisbon.

For a small fee I took the elevator up to the observation tower.

There I heard three young ladies talking, and I could actually understand what they were saying, mostly. (A welcome change.) It turned out they were from Australia. I also visited the Museu de Marinha (Navy Museum), a few blocks up from the Monument. I crossed through the Praça do Império, the city square and park between the two museums. There was a “Loja” at the Pavilhão das Galeotas, displaying “royal vessels.” This was across a square from the main entrance. They served beer at the Loja, so before going over to the entrance I stopped and enjoyed a “Sagres.” (Which became one of my four favorite Portuguese beers.)

On Saturday, the 31st, I took a train up to Porto, coming in at Campanhã station. I met up with Tom and Carol, who were waiting at the station. (Thankfully.) I’d booked a room at the Oporto Brothers Hostel, Rua da Alegria 919. They’d gotten a place at Rua Antero Quental 374, a 12-minute walk from my hostel. It’s a 16-minute walk via the Rua da Constituição, but that’s one of the main drags in Porto. I’ve found that the name of a major street can come in handy if you get lost in a city where they don’t speak your language. But in case you can’t pronounce it right (“Rua da Constituição”), it helps to have it written down.

So, I unloaded my pack at Oporto Brothers, then we spent the next day and a half sightseeing. For one thing we visited the Casa do Infante. It featured an historical collection in the house where Prince Henry the Navigator was born.

We also went to a wine – or rather “port” – tasting, but I was a bit disappointed. One small glass, and here I was ready to forego beer for the day. (They say, “Never mix the grape and the grain.”) And we took a cruise on one of the Rabelo boats that Porto is famous for. From the boat ramp beside the Ponte do Freixo out to the Atlantic Ocean, pretty much the same way – beside the river – that we’d be hiking the next day. As for some flavor of that first day’s hike:

We hiked west along the Douro River, on the Porto side, then hit the Atlantic Ocean and swung north. It’s the lesser traveled scenic alternative for the Camino Portuguese. Lots of beachside resorts, bathing beauties, and of course some old pot-bellied guys in speedos.

On the plus side – aside from fat guys in speedos – I got a picture that first morning of two lovely young fellow peregrinos. One was adjusting the other’s pack. (I’m always interested in the gear my fellow hikers are packing. I might learn something.) Later I posted on Facebook: “First day’s hike is history. West through Porto – with shady spots and sidewalk cafes – and out to the coast. Then north. Made Cabo do Mundo, 10.8 miles. Nothing too sore. Good first hike.”

That last referred to the first day’s hike. It was a nice thought (“nothing too sore”), but turned out misleading. I learned – yet again – that it’s not the first day of hiking, or even three, that wears on the feet. It’s the pounding of day after day of hiking with a 15-pound pack. (They recommend no more than ten percent of your body weight.) And it’s my opinion that there’s no way to train in advance for that – except to do the same constant hiking at home, day after day. A long hike once or twice a week won’t do it. It’ll help, but you still have to go through the agony of getting your feet accustomed to constant pounding, day after day.

Incidentally, for this trip my brother had  a copy of A Pilgrim’s Guide to the Camino Portugués, by John Brierley. (I still have my copy of Brierly’s Pilgrim’s Guide to the Camino de Santiago (French Way). I’m saving it for our return trip, hopefully next year, 2021, at which time I’ll finally be able to say that I hiked “over the *&^%$ Pyrenees!” See Remembering the “Chilkoot &^%$# Trail!”,” and links therein.) The Brierly book had “all the information needed by modern pilgrims wishing to walk the unique route to Santiago that was used by Queen Isabel of Portugal.”

“Brierly” also had – as Carol wrote later – “maps, routes, directions, historical information, places for a break (coffee cups on the map), Albergues (which we never used), restaurants and highlighted points of interest.” Those “coffee cups” in the map-book meant places we could stop and have a cool drink on a hot day, and usually something to eat as well. And on occasion those “coffee cups” were spaced way far apart, which meant a long session of hiking with no place to stop except the side of the path and some lukewarm water.

As for albergues (or auberges), they’re a “shared dormitory-style accommodation.” Some people swear by them, saying that’s where the magic of hiking the Camino comes from. But Tom stayed in one back in 2017, when he started in France and hiked over the Pyrenees. That was enough. From then on – “even to this day” – he’ll book ahead for private rooms.

Anyway, in the Greetings post I talked about taking pictures with my cheap tablet, then posting them on Facebook to the folks back home. Posting pictures on Facebook with a tablet wasn’t that hard, but writing commentary was a pain. “For one thing I seem to have fat thumbs.” For another, the tablet’s “autocorrect” had a serious problem with foreign (Portuguese) names.

For example it kept changing the “de” or “do” in so many Portuguese city names to “Dr.” Every time. Here’s an example in an early Facebook post from Portugal:

Good morning from Cabo Dr Mundo. (BTW, autocorrect is having a hissy with these Portuguese names, plus my colloquialisms.) Ready for another 10 mile hike. Slept through the night. “Cozy quarters.”

That “cozy quarters” was shorthand for the apartment having one bedroom, which Carol got. Tom and I slept in the living room, me on the couch. But there was a nice restaurant nearby.

Which brings us way past the preferred number of words in a blog post. So I’ll be doing at least one more post in the near future on this adventure. I’m hoping to finish my “Old Age Adventure” book in time for Christmas. I’ll hand out the paperbacks for family gifts…

“The Douro river and Dom Luís Bridge.” (That’s the one we passed heading out of town.)

First a note on images, or the lack thereof. I’ve discovered that with past e-books, and especially the paperback alternative versions, trying to keep the same photos as in the blog – even in miniature – wreaked havoc with page breaks. So for this and future books, and probably for blog-posts as well, I’ll forego actual images, at least for the original post. Instead I’ll provide a link like the one at the top of the page, by which faithful readers can view the image “on their own dime.”

Which leads to the caption of the photo at the top of the page: “A marking in a boardwalk of the Portuguese coastal way..”

Re: Best length for a blog-post. Answer: “It depends.” See How Long Should Your Blog Post Be – The Write Practice. “Want more shares on social media? Aim for medium length blog posts between 600 to 1,250 words.” In other words, “longer is usually better for social shares and SEO whereas shorter is usually better for getting more comments.”