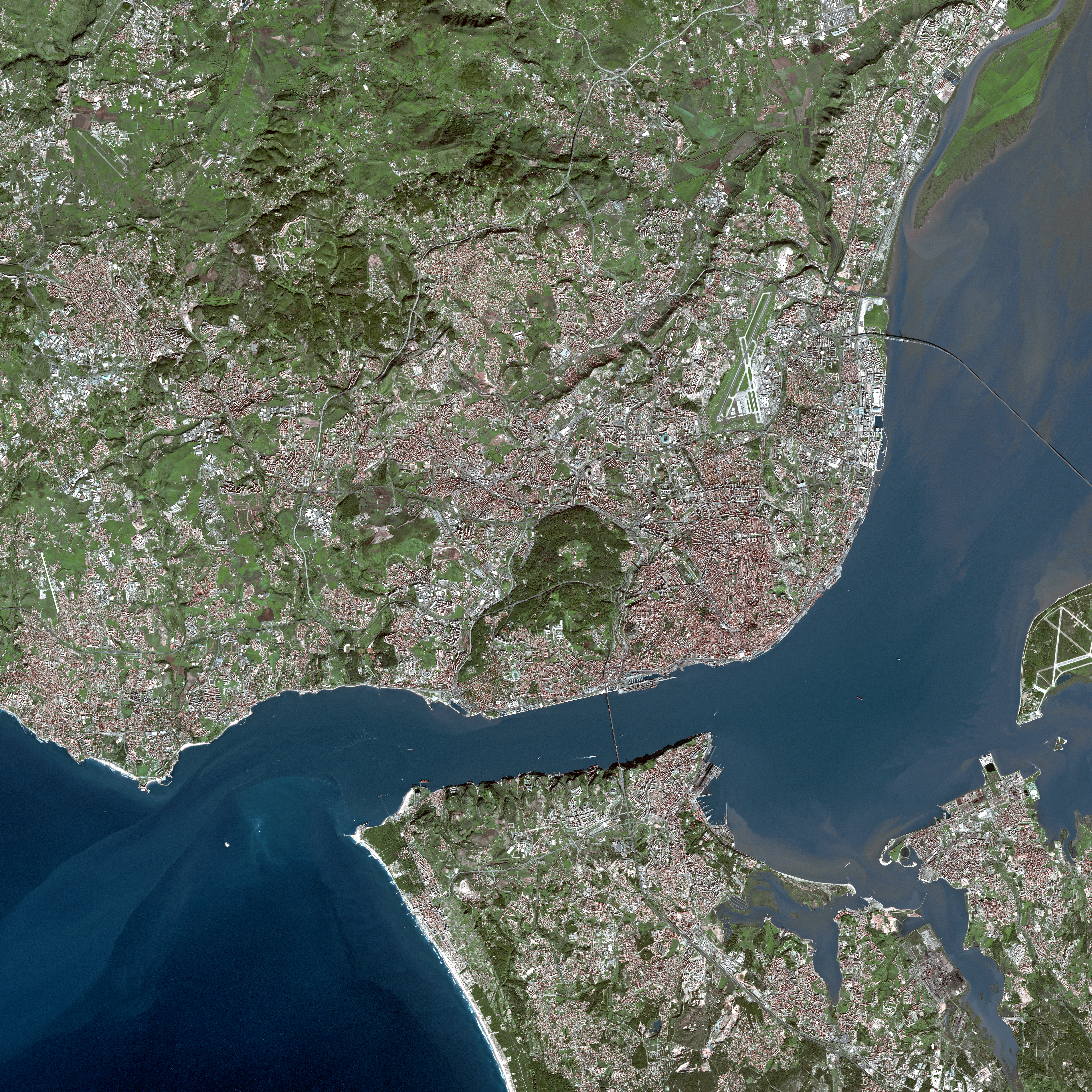 The Lisbon metropolitan area; the Setúbal Peninsula is south of the Tagus River…

I flew back from Lisbon, Portugal, on September 25. “And, boy, were my arms tired!” But seriously, I did finish a 160-mile hike on the Portuguese Camino in September. (I flew to Lisbon August 28.)

Which means the “Greetings from the Portuguese Camino” is a bit of an anachronism. (A “chronological inconsistency in some arrangement, especially a juxtaposition of persons, events, objects, or customs from different periods.”)

Part of the trip’s charm was that before, during and after the 18-day hike I greatly enjoyed the Iberian beers. Including Cruzcampo, Sagres, Mahou and Super Bock. See Beer in Portugal – Wikipedia and its long history, “as far back as the time of the ancient Roman province of Lusitania, where beer was commonly made and drunk.”

I hiked with my Utah brother and sister-in-law. We started in Porto, then hiked “back” to Santiago. (My brother and I hiked the Camino Frances in 2017, and came to Santiago from the east.) This time we three came into Santiago from  the south. I wrote about that proposed pilgrimage on August 2d, in St. James – and “my next great pilgrimage.” (My companion blog.)

In 2017 … my Utah brother and I hiked [and biked) the most popular “Camino,” the French Way… But a month from now – September 2, 2019 – my brother and I will start hiking the [160] or so miles, from Porto “back” up to Santiago, via the Portuguese Way. And this time we’ll be joined by my Utah sister-in-law.

That Portuguese Way is another name for the Camino route passing through Portugal. You can begin in either Lisbon or Porto. “The Portuguese way is the second most popular route after the French Way and the Portuguese coastal way” – which we took, hiking west from Porto – “is the seventh most popular.” See What Is The Coastal Portuguese Camino De Santiago Like?

If you start your Camino in Porto and really want to be by the water, you have the option of spending your first day [or two] walking the unofficial but easy-to-follow route alongside the beach between Matosinhos and Vila do Conde… Towards the end of the following day, the route heads inland and unless you take a detour or two, you won’t see much of the sea until you get to Galicia.

Which is pretty much what we did.

10.8 miles from Porto to Cabo do Mundo the first day. (And by the way, the tablet I used to both take some pictures and post them on Facebook had a problem. It had autocorrect, which changed a name like Cabo do Mundo to “Cabo Dr Mundo” every time. It got to be aggravating after a while.) Then 10.2 miles to Vila do Conde. (Same tablet problem.) From there it was a mere six-mile to Arcos. (A rare short hike.) From there 13 miles to Barcelos, where we took our first day off. Which was pretty much the pattern: Our three days off were always preceded by one long hike.

Which – by the way – was prompted by my brother’s booking our hotels – auberges, whatever – a good six months in advance. And that made us different from most Camino pilgrims.

All the good books on the “magic of the Camino” focus on the wonderful people you meet and mingle with in the dormitory-style auberges. But my brother had that experience once – in 2017, crossing the Pyrenees, before we met up in Pamplona – and that was enough for him.

I like my privacy, and being able to get away from “mingling” after a long day’s hike.

So anyway and to repeat, we started out on the Coastal Route after Porto, then shunted over to the Inland Route. There – among other rivers – we crossed the Lima river at Ponte de Lima:

For the inland route, Ponte de Lima‘s bridge is used. The later bridge possibly dates to the 1st century and was rebuilt in 1125… [The bridge] is named after the long medieval bridge (ponte) that passes over the Lima river that runs next to the town.

Or as Arlo Guthrie might have phrased it, “that’s just the name of the bridge, and that’s why they called the bridge the Ponte de Lima.”

That’s a quick look at the first part of this Camino hike, with few scintillating details or photos. (Except those at the top and bottom of the main text.) But we’re digressing here, and getting to the end of the recommended number of words in a blog post. That leads to a final note.

Remember how we used to peel the skin off our back and arms after a bad sunburn? Back in the old days, when we were young and before today’s fancy-schmancy creams and lotions that prevent such peeling? Something like that happened to the soles of my feet once I got home.

By the time we reached Santiago the soles of my feet were like shoe-leather, tough, blister-over-healed-blister and callused. (Or “cayused,” as one cute Farmacia lady said.*) But then since I’ve been home, I’ve peeled off several layers of that tough, leathery skin. So apparently the affected parts of the physical body – like the soles of your feet – go through a process of “decompressing” after such an adventure, just like you do mentally.

Which I suppose is just another way of saying that when you engage in such a pilgrimage – or any life-changing experience – you can expect both good times and times that aren’t so good.

I’ll be writing more about our Portuguese Camino adventure, but in the meantime: The good memories weren’t just limited to the Cruzcampo, Sagres, Mahou and Super Bock…

Re: “Beach” alternative. See What Is The Coastal Portuguese Camino De Santiago Like? it included a little blurb about the charms of “mingling” with other pilgrims: “One of the endearing aspects of walking the Camino, and possibly a reason people become addicted to it, is the joy of meeting fellow walkers, their support and encouragement and the friendships you make along the Way.”

Re: Cruzcampo. The link – Cruzcampo Pilsener | Grupo Cruzcampo SA | BeerAdvocate – included some definitely negative reviews, but I liked it. I had at most one or two samples on this trip, but on the 2017 Camino Frances hike, I especially enjoyed an ice cold can on the train ride from Madrid up to Pamplona, where I met my brother, who’d hiked over the Pyrenees. I’d had enough of mountain hiking, since we’d hiked the Chilkoot Trail the summer before.

Re: The number of miles hiked. I originally wrote 140 miles, but it turned out we hiked 160.

Re:  “Cayused.” It happened first thing one morning on the hike. We stopped at a Farmacia, as my sister-in-law wanted something like Band-aids for her blisters. She looked at one brand in Portuguese, but the lovely clerk said “those are not for blisters, they are for – how you say? – cayuses.” Which is how the Portuguese pronounce “calluses.” It was very cute, and very memorable…