No, this isn’t a caricature of Donald Trump.  (But this alligator mississippiensis is smiling nicely…)

It’s been tough getting back to blogging on a regular basis.

…aside from a “pain in the back,” I’ve undergone some other big  life events including but not limited to a[n eye] surgery … to have a lens put back in one eye [as shown a[bove] right]…  But now things have calmed down a bit, even if only in my own life. Which means I can get back to blogging…

Unfortunately, it still hasn’t been easy.  One big reason is my recent life events – “including but not limited to” – included the long, drawn-out process of first Buying a House, then moving out of my old, tiny one-bedroom apartment, and third moving my accumulated junk into a new and relatively-expansive private home.

So now I’m part of the landed gentry…

But as I also discovered, this process continues “even to this day.”  Which means that while I’ve moved all my accumulated belongings into the new house, much of that “stuff” remains in boxes or big piles scattered mostly in the farther-back rooms.  But now I have time…

So anyway, to get back in the swing of things, I came up with the idea of looking back at what I was doing about  this time last year.  That led me to “There he goes again,” from May 30, 2016.

Since then the phrase “there he goes again” has taken on a whole new meaning.

Last year’s “There he goes again” was about my projected June 2016 kayaking trip deep into the Okefenokee Swamp.  This was to be my second overnight-camping trek into the swamp, which “despite it’s fearsome reputation – as illustrated by the lurid movie poster at right … is quite peaceful.”

It turned out to be quite an exciting second trip into the Okefenokee.  Among other things I saw some fifty alligators during the first hour of paddling.  (Then I stopped counting.)

And I camped at the CANAL RUN shelter, “some nine miles in from the Foster State Park launch site.”   And  (Complete with its own in-house resident gator.)  Third, because it was so early in the season the canoe-only trails were much vegetated-over.  Which meant that many times I had to “butt-scootch” my kayak over a barely-sunken log, and sometimes had to stick my hand out, grab another log and finish pulling the kayak only.  The last time I reached my left hand out I saw a patch of white.

It turned out to be yet another gator – though rather smaller than the one shown at the top of the page – and “smiling” nicely at what he no doubt thought was a tasty new snack.

But now back to that phrase “there he goes again” having taken on a whole new meaning. 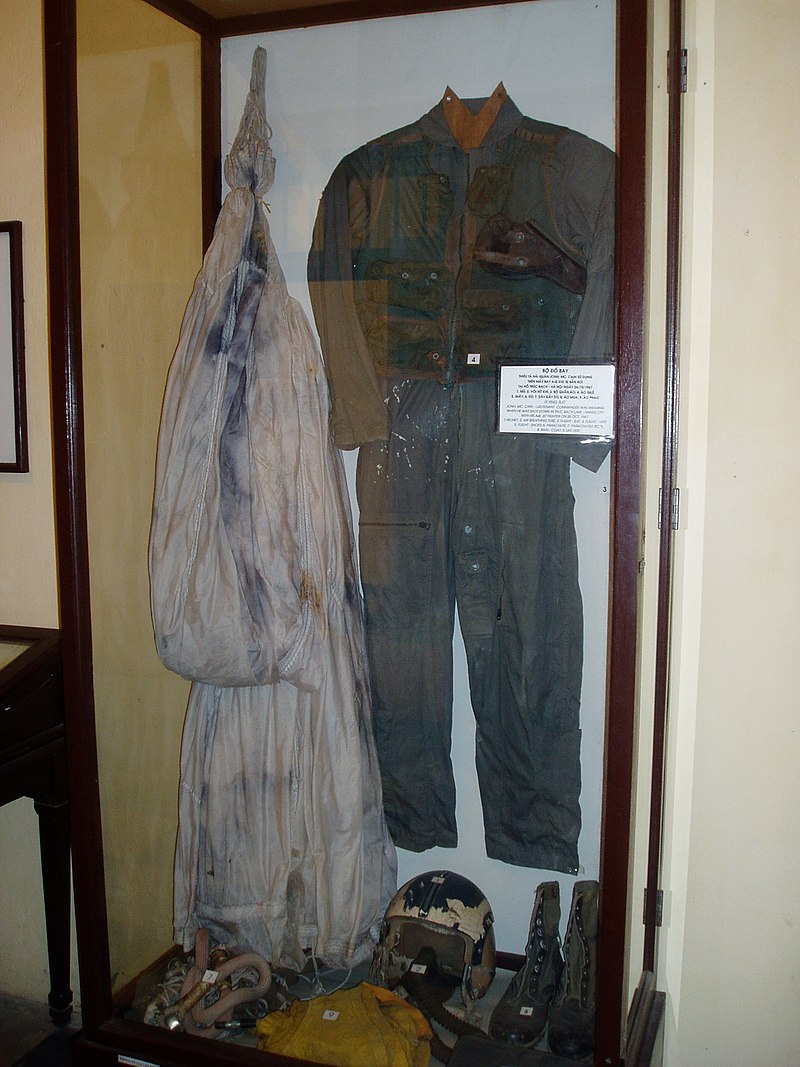 (For an alternate view see Torture – John McCain – Pictures – CBS News.  Also, the caption for the photo at left reads:  “McCain’s flight suit and parachute, on display in the North Vietnamese museum at the site of the “Hanoi Hilton” Hoa Lo Prison.”)

More recently, from April 5, 2017, there was There He Goes Again:  On NAFTA Trump Fails To Live Up To What He Says, And American Workers Will Pay For It.  The post – written by “Chuck Jones, President, United Steelworkers Local 1999” – noted a local plant shutdown that had “outraged” Trump on the campaign trail, but not a bit since he’s taken office:

President-Elect Donald Trump tweeted his outrage when the shutdown was announced.  But President Trump hasn’t said a thing since…  I could see it coming back in February when, speaking about what he had been calling the U.S.’s “worst trade deal ever,” and a “disaster,” he said NAFTA just needed “tweaking.”

(Jones was referring to the North American Free Trade Agreement.  See the notes for more.)

And finally, there was this from May 5, 2017:  There He Goes Again… Trump Praises Single Payer Healthcare.  It seems that shortly after celebrating “the 1/3 passage of the American Healthcare Act” – 1/3 because it only passed the House and not the Senate, nor was it signed into law by the President – Donald Trump “sat with Australian Prime Minister Malcolm Turnbull, and praised their country’s single payer healthcare system.”

The conservative-bent writer went into detail about the problems confronting what he thought would be positive change to our health-care system.  He also said Trump’s “public concession that single payer healthcare is better than our own is going to do more to damage our effort than Obamacare’s failure.”  (And he noted among other things that Trump’s “misspeaks” prompted Senator Bernie Sanders to burst into laughter and promise “to quote the president on the floor of the Senate when they debate their own version of the bill,” with video.)

The article then concluded:

“…we need the president to just stop talking.  For the love of God, just smile and wave.  Please?”

Which would be a nice change, and brings us back to the photo at the top of the page.

Meanwhile, maybe it’s time for me to go back “back in to the swamp,” back to kayaking in the quiet, peaceful Okefenokee, home of Pogo Possum and his gentle friends:

…despite the discomfort that seems to got along with such efforts, it felt good to finally visit the home of Pogo Possum.  To visit – even for such a short while – the “hollow trees amidst lushly rendered backdrops of North American wetlands, bayous, lagoons and backwoods.”

And speaking of Pogo Possum, here’s a bit of homespun wisdom to meditate…

The upper image is courtesy of Alligator – Wikipedia, the free encyclopedia.  The caption:  “American alligator (A. mississippiensis).”  I used that lead image in the post – from May 30, 2016 – “There he goes again.”  The caption used in the post reads:  “An ‘alligator mississippiensis,’ prevalent in the Okefenokee Swamp – where I’ll soon be kayaking…”

The lower image was also featured in the 5/30/16 post, and featured the following:

A porcupine, a misanthrope and cynic; prickly on the outside but with a heart of gold.  The deadpan Porky never smiles in the strip (except once, allegedly, when the lights were out).  Pogo’s best friend, equally honest, reflective and introverted, and with a keen eye both for goodness and for human foibles.

I wondered why I liked him so much…