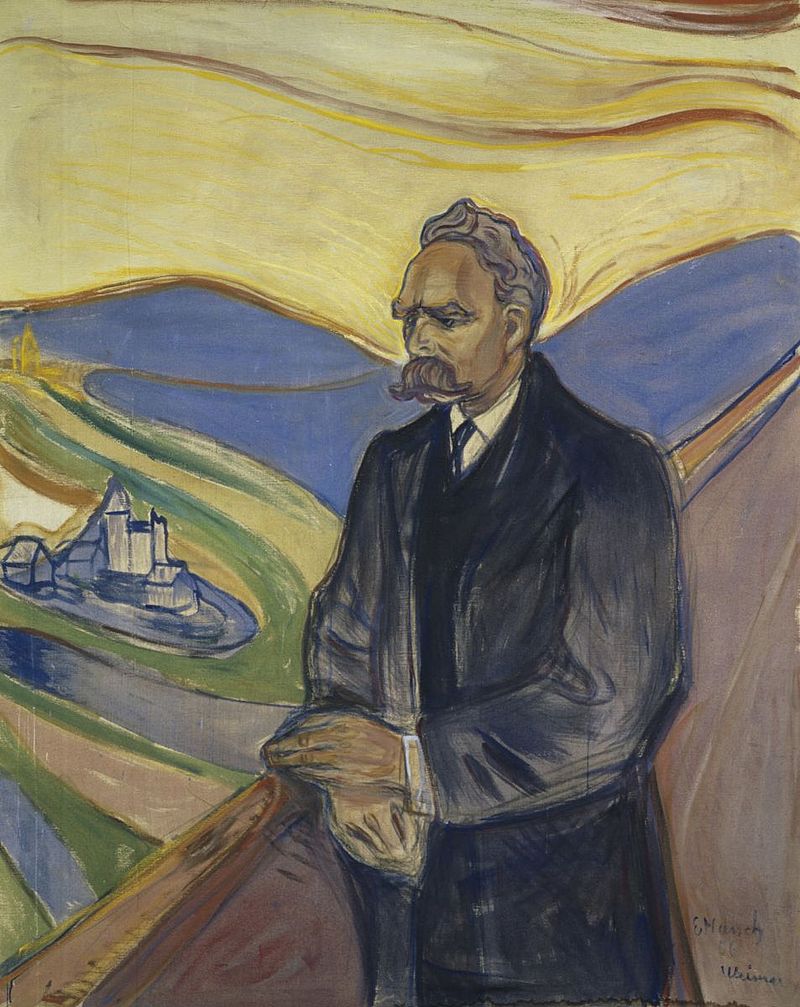 A portrait of philosopher Friedrich Nietzsche, by artist Edvard Munch – of whom more later…

As noted at the end of the last post,* my next post was supposed to be on the idea of a “Bizarro Trump.” (An idea based in part on the Bizarro Jerry and in turn the Bizarro Superman, one interpretation of which is seen at left.)

But the project is turning out to be more complicated than I thought.  That’s mostly because it’s becoming increasingly difficult these days to tell which version of “the Donald” is more weird: Bizarro Trump or the real thing.   So here’s a kind of stopgap post.

The theme for this post is that no matter how bad our current political situation may seem now, we will get through it.  And more than that, we’re going to come out stronger.  Or as Friedrich Nietzsche put it in Twilight of the Idols:  “What does not kill me, makes me stronger.”

And incidentally, the alternate title was “How to Philosophize with a Hammer.” 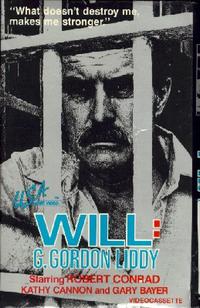 And speaking of philosophizing with a hammer:  Nietzsche’s phrase got some notoriety back in 1977.  That’s when G. Gordon Liddy was released from prison for his role in the Watergate scandal.  And when he was released he quoted the phrase to reporters.  But he quoted it In the original German – “Was mich nicht umbringt, macht mich stärker” – which of course caused those reporters to scramble for a translation.

In turn it should be noted that in the movie version of Liddy’s life – as seen at right – the phrase was translated, “What doesn’t destroy me, makes me stronger.”  See Friedrich Nietzsche – Wikiquote. (Which included another timely quote: “Everything the State says is a lie, and everything it has it has stolen.”  Depending – I suppose – on which party is in power…)

And now for some background:  Nietzsche (1844-1900) was a “German philosopher, cultural critic, poet, philologist, and Latin and Greek scholar whose work has exerted a profound influence on Western philosophy and modern intellectual history.”

But unfortunately, Nietzsche’s work came into disrepute after it became indelibly associated with Fascism and Nazism.   Put another way, his “growing prominence suffered a severe setback when his works became closely associated with Adolf Hitler and the Third Reich.”

Ironically, some scholars have seen the term as referring to a person “willing to risk all for the sake of enhancement of humanity.”*  Which of course would be a good thing.  But somewhere along the line the idea got bastardized – by other Germans and at a later time – for pure political gain:

The term Übermensch was utilized frequently by Hitler and the Nazi regime to describe their idea of a biologically superior Aryan or Germanic master race [and] became a philosophical foundation for the National Socialist ideas…  The Nazi notion of the master race also spawned the idea of “inferior humans” (Untermenschen) which could be dominated and enslaved;  [however] this term does not originate with Nietzsche.  Nietzsche himself was critical of both antisemitism and German nationalism.

See Übermensch – Wikipedia.  But there are of course differing points of view.

“That which does not kill us makes us stronger.”  Nietzsche, history’s greatest angsty teenage boy, blithely asserted this whopper of an untruth in his 1888 book “Twilight of the Idols…” [But] Nietzsche’s struggle with Syphilis at the end of his life did not make him stronger.  It weakened his body and mind, to the degree that his work was later able to be twisted into Nazi propaganda.

On the other hand, we’re not talking about individuals here.  We’re talking about We the People, the ongoing, undying American entity that survived a bloody Civil War, a Great Depression and two World Wars.  And after each catastrophe, we as a people came out stronger.

And so it will be with our current political situation.  In the meantime there’s this note:  The famous artist Edvard Munch did the portrait of Nietzsche shown at the top of the page.  But he was also famous as the artist who painted “The Scream,” shown below.

Which pretty much sums up how I feel these days, when surveying the current political scene.

(Or after a round-and-round conversation with “Mi Dulce,” but that’s a whole ‘nother story…*) 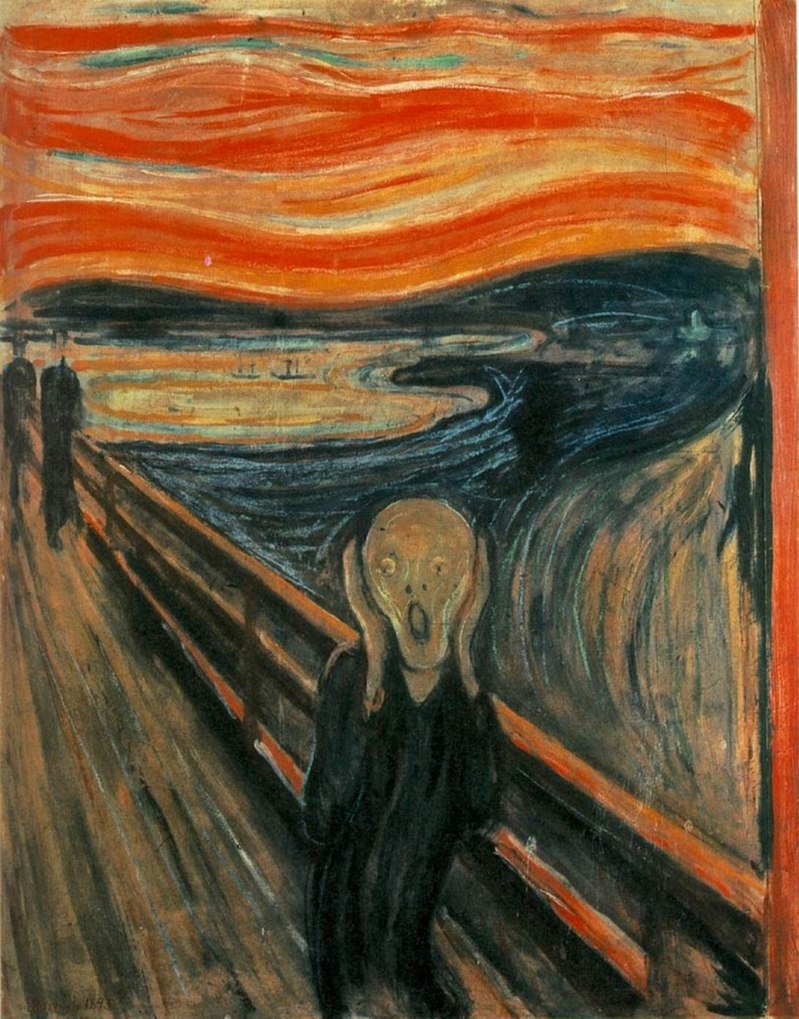 “Note” also that an asterisk in the main text indicates a statement supported by a reference detailed further in this “notes” section.  Thus, as to the last post, see Obama was “our president” too.

Re:  “Willing to risk all for the sake of enhancement of humanity.”  See “Nietzsche’s idea of [an] overman [Ubermensch] and life from his point of view.”

The lower image is courtesy of Edvard Munch – Wikipedia.  See also The Scream – Wikipedia, which noted that  the title was “given to each of four versions of a composition, created as both paintings and pastels, by Norwegian Expressionist artist Edvard Munch between 1893 and 1910.”  One critic described the work(s) as “an icon of modern art, a Mona Lisa for our time.”  The article further noted that Munch did five versions, two in 1893, two in 1895 and one in 1910.  The most recognizable version is said to be the 1893 “oil, tempera and pastel on cardboard,” and is currently located at the National Gallery in Oslo, Norway.