As I approach my 64th summer, the idea of leaving a legacy looms larger and larger.

Don’t get me wrong.  Even though I had to retire early (due to unforeseen circumstances), I’m enjoying the heck out of this not-having-to-go-to-work-every-day.  But I still want to leave something to future generations, even if it’s only some musings in a blog like this.

Your legacy is putting your stamp on the future.  It’s a way to make some meaning of your existence:   “Yes, world of the future, I was here.  Here’s my contribution, here’s why I hope my life mattered.”

See 4 Smart Ways To Leave A Legacy – Forbes, and also Quotes About Legacy – Goodreads, which included these:  “Carve your name on hearts, not tombstones.  A legacy is etched into the minds of others and the stories they share about you.”  Or consider this:

Our days are numbered.  One of the primary goals in our lives should be to prepare for our last day.  The legacy we leave is not just in our possessions, but in the quality of our lives. What preparations should we be making now?  The greatest waste in all of our earth, which cannot be recycled or reclaimed, is our waste of the time that God has given us each day.

That was by Bill Graham (1931-1991), the noted “impresario and rock concert promoter,” shown at left in 1974.  Then there are the “I write” quotes from Shannon L. Alder, which include these: “I write because God loves stories,” and “I write because one day I will be gone, but what I believed and felt will live on.”

Then too there are the closing lyrics to It Was A Very Good Year, the 1961 song first recorded by Bob Shane and The Kingston Trio, but later made famous “by Frank Sinatra‘s version in D-minor, which won the Grammy Award for Best Vocal Performance, Male in 1966:”

But now the days are short, I’m in the autumn of my years
And I think of my life as vintage wine
From fine old kegs, from the brim to the dregs
It poured sweet and clear
It was a very good year…

And just as an aside, this July I’ll be traveling to Hoboken, New Jersey.  It’ll mostly be a home-base for day trips to the Big Apple.  But Hoboken is also home to the Sinatra Museum (and/or birthplace), at 417 Monroe Street, and well worth a visit by itself.

But getting back to those closing lyrics…   Note that in 1966 – when he won the Grammy for Good Year – Frank was only 51 years old.  (A mere pup by present-day Baby boomer standards.)  So his saying both that his “days are short” and that he was – in 1966 – “in the autumn of my years” has turned out to be a huge anachronism, 49 years later.

(An anachronisim is among other things, a “chronological inconsistency.”  But see also Better Living Through Chemistry, a phrase originally designed to praise or promote new products like “chemicals and plastics,” but now often used to imply “the sarcastic criticism of the same.”)

So anyway…   To make a long story short, for us in the 64-YOA-and-up range, a better musical allegory might be The Best Is Yet to Come.  As Wikipedia noted, this was “the last song Sinatra sang in public, on February 25, 1995, and the words ‘The Best is Yet to Come‘” are etched on his tombstone.  (Which opens up a whole ‘nuther metaphoric can of worms:)

Getting back to the theme of this column:  That theme is “on leaving a legacy,” exemplified by Frank Sinatra and – in an earlier age – Vincent Van Gogh.  (Of whom more below.)  In my case, the legacy I’m working on includes these blog-musings, and also my art; paintings in the oil and – more recently – acrylic genres.  (Of which more below.)

That legacy also includes things like pushing the envelope when it comes to the physical adventures still available to me, before I get too old and decrepity.  Adventures like last November’s eight-day primitive-camping canoe trip 12 miles off the coast of Mississippi.  (See On achieving closure and “I pity the fool!”)  And like hiking the Appalachian Trail, though in segments and not “the whole dang thing.”  (Of which more later this spring.)

Which brings up how John Steinbeck approached his “getting up in years.”  In Part Two of Travels with Charley, he noted men his age who – told to slow down –  “pack their lives in cotton wool, smother their impulses, hood their passions, and gradually retire from their manhood.”  (Men who “trade their violence for a small increase in life span.”)   But that wasn’t his way:

I did not want to surrender fierceness for a small gain in yardage…  If this projected journey should prove too much then it was time to go anyway.  I see too many men delay their exits with a sickly, slow reluctance to leave the stage.  It’s bad theater as well as bad living.

On the other hand I do want to make sure I stick around as long as I can, for reasons including the art legacy that I’ve only recently started getting up to speed on.

I’ve always wanted to paint, but only since retiring have I had the time to figure out the best artistic expression for me, “painting-wise.”  One thing I’ve learned is that – in a way – painting is like raising a kid.  You start out exercising near-total control, but – if you’ve done your job right – in the fullness of time the painting develops a life and character all it’s own.  Eventually you exercise less and less control, and instead watch it “blossom” before your eyes.

But again we digress…  I’ve always admired Vincent van Gogh and his unique style, which you can spot almost-literally a mile away.  And perhaps someday – if I do the job right in the time I have left – I too can leave behind an artistic legacy like his.  (Though I wouldn’t mind making a few shekels for myself in the process.)  Which brings up the fact that Van Gogh left a huge legacy – as noted – even though he died as poor as a church mouse:

In just over a decade he produced more than 2,100 artworks, including 860 oil paintings and more than 1,300 watercolors, drawings, sketches and prints…   Van Gogh’s works are among the world’s most expensive paintings ever sold…  [For example,] his Self Portrait with Bandaged Ear was sold privately in the late 1990s for an estimated US $80/$90 million. 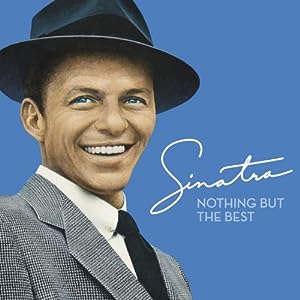 Another guy who left a pretty good legacy…

The upper image is courtesy of Vincent van Gogh – Wikipedia, the free encyclopedia.  The Wikipedia caption is “Self-Portrait, Spring 1887, Oil on pasteboard.”  The caption from the link provided is:  “An intense man with close cropped hair and red beard gazes to the left.”  Wikipedia further noted:

Van Gogh’s works are among the world’s most expensive paintings ever sold…  Those sold for over US $100 million (today’s equivalent) include Portrait of Dr. Gachet,Portrait of Joseph Roulin, and Irises.   A Wheatfield with Cypresses was sold in 1993 for US $57 million, a spectacularly high price at the time, while his Self Portrait with Bandaged Ear was sold privately in the late 1990s for an estimated US $80/$90 million.

The lower image is courtesy of www.amazon.com/Nothing-But-Best-Frank-Sinatra/dp/B0013L5M08, vis-a-vis the audio-CD original recording remastered and released in 2008.  For more on Frank Sinatra see the Wikipedia article, and/or (Frank) Sinatra.com.