For some reason this April 2021 post is now a main page when you Google “georgiawasp.” The notes give more detail, but there is a newer post,Recalling Week 8 of the COVID shut-down, above right. I’ve tried working on the problem, but without success. In the meantime, this glitch* seems to be something I and the reader will have to live with…

(Another note: In the original post I had a photo that I took, along with a caption describing a big part of my recent visit to Florida: “Can you say cheek by jowl? Except for the undeveloped lot…”

Two weeks ago I drove “back” down to Florida…

Specifically, “back” down to the Kissimmee-Poinciana area. My “brother from Utah” – who now lives in Massachusetts* – went down to check out some investment property. So, he and his lovely wife rented a condo for a week, and they invited me to come down and join them for a visit. (Along with my brother from Peachtree City and his lovely wife.)

The thing is, I lived in Florida for 54 of my soon-to-be 70 years.* And didn’t realize how much I would not miss living there until I finally left. (With “strong urging” from my ex-wife.) Which means I got a chance to “re-live the Florida lifestyle.” And for me, four days was enough.

Which brings up cheek by jowl… That refers to the property my brother and sister-in-law inspected on Wednesday morning, April 14. They’d made a tentative offer* on the place and wanted to check it out. (I was scheduled to leave for home that very day, after lunch, having arrived the previous Sunday evening, as described below.)

The four days’ experience gave me a strong sense of “deja vu all over again.” To ee what I mean, go to Google Maps and put in “poinciana fl Secure Connections.” That’s a security business in the area, and if you focus a bit you can see what I mean by “cheek by jowl.”

That is, you’ll notice the streets in that area of Poinciana all have “themes.” In this case, lots of bird names like Hawk, Pelican and Parrot. You’ll also notice there are very few undeveloped lots in the area. The one shown above left is an anomaly. For the time being anyway…

Then you can go to “RJ Automotive Repair Shop,” at 12201 Seminole Boulevard, in Largo, Florida. That’s the area I grew up in – and lived in – those 51 of almost-70 years.* You’ll see the same “cheek by jowl” set of ticky-tacky houses all jammed together. (On the other hand, when we first moved down there in 1956, the area was mostly orange and grapefruit groves. That is, the area north of 12210 106th Street, and from what is now 105th Street down to that big lake; Lake Seminole.) For that matter, each house lot in the block – back in 1956 – had three grapefruit trees in the front yard and another three in the back…

But we’re digressing here. The point is that by the time I left Pinellas County, in late 2009, the area was a nightmare of traffic, not to mention the crowded living and “hot muggy weather.”

But I’m not alone in feeling that way. See for example, What is Living In Florida Really Like – Moving To Florida. The article describes three phases, or sets of feelings of people who move there. First comes the initial “honeymoon period,” which can last from three months to two years. Then comes an in-between period, from four months up to five years. Then finally comes the third phase, realizing “what living in Florida is really like.” (From people who’ve lived there “for many years.”) There are some unanticipated negatives “never mentioned in the glossy promo brochures.” They include: 1) learning to live mostly indoors “to avoid sunburn and the hot muggy weather,” and 2) having to maintain your pool, because otherwise “the Florida sun will turn a pool into a thick pea-green soup in days if maintenance is not kept up:”

At this point you are either in the group that has avoided or stopped doing things you loved outdoors altogether because of the hot muggy weather and will eventually leave the state … or you’re stuck because there’s no way you can afford to move out.

Or unless you are “forced” to leave the state as part of a nasty divorce proceeding. (Which turned out to be a blessing in disguise. “Thank you Jesus!” And I really mean it.) 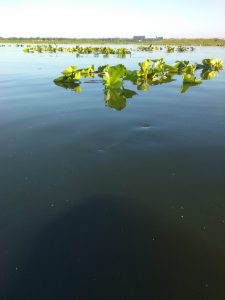 But to be honest, in April – at least – some parts of Florida aren’t too bad. I ended up doing three kayaking trips on Lake Tohopekaliga. (At right.) I set out for my  first kayaking – 90 minutes or so – from Big Toho Marina, on the north end of the lake. I wrote later, “It’s a big-ass lake, some 22,000 acres, about the size of Lake Oconee in GA, and four times the size of Lake MacIntosh” in Peachtree City. “Fortunately the locals refer to it as ‘Lake Toho.’ As in ‘Big Toho Marina,’ where I finally found a boat ramp.” (It took awhile to find a put-in that first early-Monday-morning.)

The next day – Tuesday, April 13 – I did two trips. The first was out of the Big Toho Marina, again. Then after a snack and bladder break, I went out for a second kayaking, this time out of the Granada Public boat ramp. (South of Kissimmee and about at mid-lake of “Lake Toho.”)

Then on the way home – Thursday, April 15, after a traffic-choked drive heading north by west over to Chiefland – I kayaked an hour or so on the Suwannee River. I had planned to put in Friday morning at the free park right by the water in Fanning Springs, but here’s a traveler’s alert.* That “free park” is now closed; to put in there I’d have to go next door into Fanning Springs State Park, which charges six dollars “per vehicle.” So I said the heck with that, and – with the Google app on my phone – I found the Log Landing public boat ramp. It’s 14 miles and some 20 minutes north of Fanning Springs, via County Road 341. And had a pleasant paddle…

So all in all it was a pleasant four days. it was nice being with family again, exchanging memories from long ago, and occasionally hearing a family secret I didn’t know before. And the kayaking itself was a great change of pace from the three kayakable lakes around Peachtree City. Still – and as Thomas Wolfe once wrote – “You Can’t Go Home Again.” The question is, what happens when you don’t want to “go home?” When you don’t want to go back and revisit all the trials and tribulations you had to go through to get where you are today? When right now you’re “turning 70 in 2021* – and still think the best is yet to come?”

Besides, who’d want to exchange the cheek by jowl living-in-Florida for your own private God’s Little Acre, amid the piney woodlands 20 minutes east of Peachtree City? And where you have your own private mini-herd of deer, coming through your yard in the mornings?

The “fuller story” on the glitch is below, at the bottom of these notes.

I took the photos for this post, of which one survived. In the original post I added, “Hopefully they’ll stay in this post,” but it was not to be. The platform photo gallery somehow lost or deleted my uploaded photos. (The photo at the bottom of the main text showed “my” herd of deer recently grazing in the front lawn, captioned, “It was so good to get back to my God’s Little Acre in the Georgia woods.”) Which means I’ll have to do some tweaking…

Re: Brother “who now lives in Massachusetts.” He’s the one I have travel adventures with, like on 2019’s “Camino” trip. (Click on the Travelogs link at right.) He recently moved to Massachusetts – at the strong urging of his lovely wife – to be nearer to their new grandson, “Little Ben.”

Re: Tentative offer. The seller accepted the offer. Which meant that after driving back to Massachusetts at the end of the week, my brother and sister-in-law packed up their fixer-upper tools, then drove back down to Florida to get the property ready to rent out.

Re: You Can’t Go Home Again. Wikipedia noted the title is reinforced in the novel’s denouement:

Re: The “foul-up” or glitch resulting in this old (March 2021) post being made so prominent right now. Maybe it’s a sign from God? See for example Sign From God Meme – Image Results, including the one featuring various church billboards, including the one billboard saying, “Well, you did ask for a sign.”

Then too, the problem seems to be more of a “bug” than a glitch. See Wikipedia:

A glitch, which is slight and often temporary, differs from a more serious bug which is a genuine functionality-breaking problem. Alex Pieschel, writing for Arcade Review, said: “‘bug’ is often cast as the weightier and more blameworthy pejorative, while ‘glitch’ suggests something more mysterious and unknowable…

I have no idea why this old post – from April 2020 – comes up as the main page when you Google “georgiawasp.” Something happened on the evening of April 3, 2021, and I’m not sure what. I was writing up the new post, Revisiting March 2020, that I finally published on Easter Sunday, April 4, 2021…

For other more-recent posts, click on the highest-up link under “RECENT POSTS,” above right.