As far was we know, nobody yelled out “Shut up, you filthy sodomite” to Oscar Wilde…

I just finished reading the January/February 2019 National Geographic magazine.  I came across this comment from Oscar Wilde, about Americans – and their unique hero-worship. 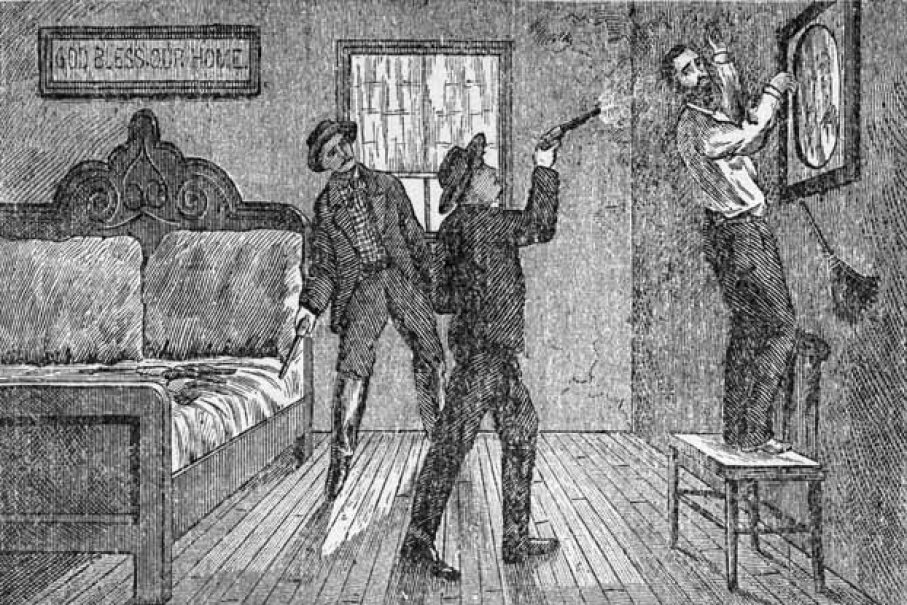 Wilde was visiting America – specifically, St. Joseph, Missouri – a week after Jesse James was killed.  (By the “coward Robert Ford,” illustrated at right.)  Wilde thus “witnessed firsthand the mad clamor for relics of the outlaw at an auction of Jesse’s household belongings.”  That led him to observe: “Americans are certainly great hero-worshipers, and always take their heroes from the criminal classes.”

(Not that has anything to do with current events…)

That led me to Oscar Wilde in America – Breaking Character.  I wanted to verify the National Geographic quote, and maybe get some additional background.  Which led me to this:

In Leadville, Colorado he was winched down into the depths of a silver mine and delivered a lecture to the miners on the ethics of art.  “I read them passages from the autobiography of Benvenuto Cellini and they seemed much delighted,” he said.  “[But] I was reproved by my hearers for not having brought [Cellini] with me.  I explained that he had been dead for some little time which elicited the enquiry, ‘Who shot him?’

It turns out that “some little time” was over 300 years.  That is, Cellini (1500-1571) was an “Italian goldsmith, sculptor, draftsman, soldier, musician, and artist.”  (He also wrote the “famous autobiography” that Wilde read to the Colorado miners.)

And in turns out that nobody shot Cellini…  That is, despite his various escapades – sexual and otherwise, described further below – he lived to a “ripe old age.”

I’ve written about Wilde before in Oscar Wilde and “gross indecencies,” On Roy Moore – and Oscar Wilde, and Imitation Game” – Revisited.  And when I started work on this blog-post, I planned to review those past posts on Wilde.  I also planned to write more about Americans today, VIS-À-VIS their habit of “always tak[ing] their heroes from the criminal classes.”

But as it turns out, Cellini was way more interesting…

For one thing, he was “one of the most important artists of Mannerism.”  (Which includes a variety of approaches “associated with artists such as Leonardo da Vinci, Raphael, and early Michelangelo.  Where High Renaissance art emphasizes proportion, balance, and ideal beauty, Mannerism exaggerates such qualities, often resulting in compositions that are asymmetrical or unnaturally elegant.”)  And he’s “remembered for his skill in making pieces such as the Cellini Salt Cellar and Perseus with the Head of Medusa.”  (Seen at left.)

For example, he boasted in his memoirs of killing five people.  There may have been more but no one knows for sure:  He never got convicted.  (He got pardons from various church officials, including popes.)  But he did have to bounce around a lot:  From Rome to Florence to France, back to Florence, then to Venice, and so on.

For an example of that (and other things):  In 1548 – he was 48 or so (being born in 1500 helps) – a woman in Florence accused Cellini of sodomizing her son, Vincenzo.  To escape the charge he fled to Venice.  “This was not the first, nor the last time, that Cellini was implicated for sodomy.”

And this – Wikipedia noted – illustrated his strong homosexual or bisexual tendencies; (“once with a woman and at least three times with men during his life”).  As for penalties:  As a young man “he was sentenced to pay 12 staia (bushels) of flour in 1523 for relations with another young man…  Meanwhile, in Paris a former model and lover brought charges against him of using her ‘after the Italian fashion’ (i.e. sodomy).”  Later still, in 1556 (at age 56):

Cellini’s apprentice … Montepulciano accused his mentor of having sodomised him many times while “keeping him for five years in his bed as a wife.  This time the penalty was a hefty fifty golden scudi fine, and four years of prison, remitted to four years of house arrest thanks to the intercession of the Medicis.  In a public altercation before Duke Cosimo, Bandinelli* had called out to him Sta cheto, soddomitaccio!  (Shut up, you filthy sodomite!)

Cellini described this as an “atrocious insult,” and tried to laugh it off.

But he wasn’t done.  (For one thing, he outlived Bandinelli by 11 years.)  In 1562 – after briefly trying a “clerical career” – he married a servant, with whom he claimed to have five children.  In 1563 he was named a member of the “prestigious Accademia delle Arti del Disegno of Florence, founded by the Duke Cosimo I de’ Medici … under the influence of the architect Giorgio Vasari.”

So aside from being a talented artist, he knew how to make some pretty influential friends.

And finally, when he died in Florence in 1571 he was “buried with great pomp in the church of the Santissima Annunziata.”  As to what caused his death, some modern readers may think that was a result of his lifelong various escapades, sexual and otherwise.

But the fact is that despite all those turmoils, run-ins and escapades, he lived to the ripe old age of 71.  And this was at a time when the average life expectancy was 30 to 40 years.  (See for example What was life expectancy in the 1500s – answers.com, and/or Life Expectancy From Prehistory to Today.)  And from all this we might glean two points of note:  For one thing, “I’m sure there’s an object lesson here, but darned if I can figure out what.”  For another:

Who says history can’t be fascinating? On the other hand – as far as we know – Cellini never got tried for “gross indecency.”

I borrowed the upper image from Oscar Wilde and “gross indecencies.”  In turn, the image is courtesy of Oscar Wilde – Wikipedia, with the caption:  “Photograph taken in 1882 by Napoleon Sarony.”  Here’s what Oscar Wilde in America – Breaking Character said about the photo:

The most iconic images of Wilde we have today [including the image at the top of the post] were actually taken in New York at the studio of Napoleon Sarony at 37 Union Square.  It was in America that Wilde perfected his image, and it’s ironic that this image was the subject of a lawsuit that changed US copyright law forever.  Sarony successfully sued a company that had reproduced 85,000 copies of this picture of Wilde, claiming ownership over the copyright of a photograph for the first time in legal history.

Wilde lectured in Saint Joseph, Missouri two weeks after Jesse James had been murdered there and found the whole town in mourning.  “Americans are certainly great hero-worshippers, and always take their heroes from the criminal classes,” he observed.

For more on Cellini, see 13 surprising facts about Cellini – DorotheumArt, How many people did benvenuto cellini kill? | Yahoo Answers, and The Bedevilment of Benvenuto Cellini – EsoterX.

Re:  The “Bandinelli” who called out to Cellini, “Sta cheto, soddomitaccio!”  He was a “Renaissance Italian sculptor, draughtsman and painter” (1488-1560).  He had a “lifelong obsession with Michelangelo,” but was also – according to Giorgio Vasari, “a former pupil in Bandinelli’s workshop” – he (Bandinelli) “was driven by jealousy of Benvenuto Cellini and Michelangelo.”