I didn’t get to bed until late Wednesday.  (Another sleepless night.)

I wanted to see if the Chicago Cubs could “break the curse.” They started Game 7 strong, and built a solid lead.  But then things got close;  the Indians tied it up in the eighth inning.

The game went into extra innings.  In the top of the 10th the Cubs got another apparently-solid lead; two runs, to go up 8-6.  But the Indians came back again and got a run in the bottom of the 10th.  The Cubs hung on and ended up winning, “by the narrowest of margins.”  (8-7.)

I’m starting to wonder if the upcoming election will turn out the same way.

One reason is all the recent 11th-hour hubbub about Hillary Clinton facing “FBI indictment.”

(By the way:  That report was “later debunked.”)

But the hubbub reminded me – after the initial shock – of a story I read some time ago in The Presidents Club.  (The book by Nancy Gibbs and Michael Duffy, Managing Editors at Time magazine.)

Starting on page 236, they described how Richard Nixon committed treason to get elected president in 1968.  But don’t take my word for it:  See George Will Confirms Nixon’s Vietnam Treason.  And by the way, the title of this post harks back to one I did last May:  Is this “deja vu all over again?”  (Which asked the musical question:  “Is there a new Maverick in town?)

The “new Maverick” – of whom I asked – was Donald Trump.  (And the post included the image at right.)  But getting back to Nixon’s treason:

The story – according to Gibbs and Duffy – began with the sub-head, “October Surprise.”  The surprise in October 1968 was the “scuttling” of the Paris Peace Talks.  The kicker was that despite having a peace treaty ready to be signed – to end the war in Vietnam – the South Vietnamese suddenly pulled out.

The upshot –  of South Vietnam pulling out – was that Richard Nixon got elected instead of Hubert Humphrey.  And as Nixon later confessed, if the peace treaty had been signed – some 72 hours before Election Day, 1968 – Humphrey “would have had the election in the bag.”

So how did Nixon do it?  According to one official, “It is not stretching the truth … to say that the Nixon campaign had a secret source within the U.S. negotiating team.”

Which leads to my question:  “Does Donald Trump have a secret source within the FBI?”  (Or is the FBI simply an anti-Clinton “Trumpland,” as other sources say…)

But again, let’s get back to Nixon’s treason.  Before announcing the tentative accord – some three weeks before the election – then-President Johnson called the three candidates for president:  Nixon, Humphrey, and George Wallace.  (At left.)  To each candidate he said the same thing, “I know you don’t want to play politics with your country.”

He was wrong – very wrong – about Nixon.

Over the next two weeks the plot thickened.  Nixon figured that Johnson wanted to bring peace in Vietnam – to end the war – solely to “swing the election in the final days,” to Humphrey.  And he had sources inside LBJ’s camp, including Henry Kissinger, who was “working both sides of the game.”  (And despite Kissinger’s thinking that Nixon was “a disaster,” “unfit to be President,”and “the most dangerous of all men running.”)

The upshot was that Nixon made a deal with Nguyễn Văn Thiệu – at right – then-president of South Vietnam.  He pulled out of the talks, with the result that Johnson looked like “a sneak, a manipulator who put his own agenda ahead of the country’s.”  (Even as Nixon himself was doing just that.)

Later – when Nixon spoke with Johnson in person, by phone – he “poured it on thick,” saying that he would “never do anything to encourage Saigon not to come to the table.”  But after the phone call ended:

“Nixon and his friends collapsed with laughter,” reported the Sunday “Times” of London in an account of the episode months later.  “It was partly in sheer relief that their victory had not been taken from them at the eleventh hour.”  Forty-eight hours later, Nixon won the presidency by the  narrowest of margins:  seven tenths of one percent.

Which brings up a key point:  Although Nixon won the popular vote by that mere “seven tenths of one percent,” he won by a wide margin in the Electoral College.  (301 Electoral College votes to 191 for Humphrey and 46 for Wallace.  See Presidential Election of 1968 – 270toWin.com.)

Which means – in a word – that quite often the popular vote doesn’t mean squat.

But getting back to the election in 1968.  The other upshot of Nixon’s treachery was that Hubert Humphrey found out about it soon after the fact.  However, in the best interests of the country he kept it a secret.  (As did all other members of the “President’s Club.”)  All those arguably-honorable men kept Nixon’s treason a secret, “until the tapes revealed all.”

Another result:  U.S. involvement in the Vietnam War continued until August of 1973, instead of ending closer to Election Day, 1968.  The “war would continue and widen [and] the death toll mount … until it finally ended on terms very much like the ones tentatively agreed to in October of 1968.”  And incidentally, Nixon made his “in the bag” comment while sitting in Air Force One, one version of which is shown at left.  (And which a gracious Lyndon Johnson let Nixon use – as president-elect – as a “club courtesy.”  Referring again to the so-called “President’s Club.”)

As to his committing treason to get elected?  “‘It sure beats losing,’ he said with a smile.” 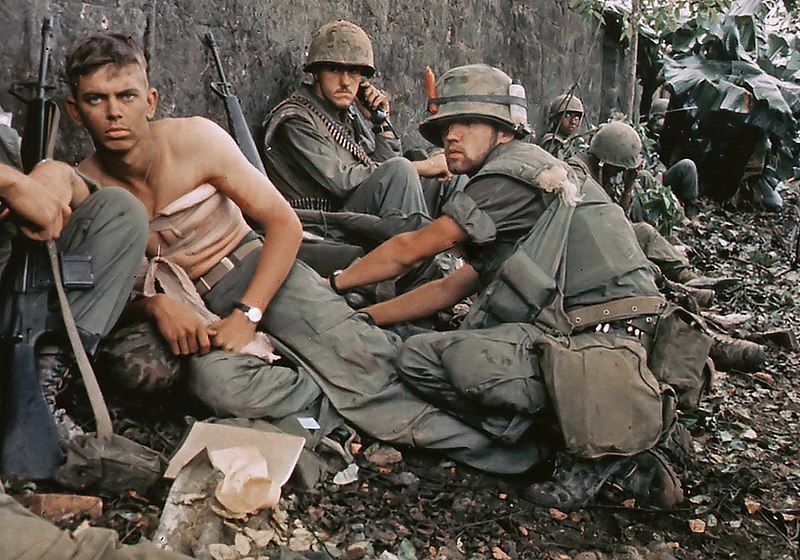 The upper image is courtesy of Richard Nixon – Wikipedia.

For another take on Clinton’s “11th-hour woes,” see FiveThirtyEight’s extraordinary prediction model is failing.  (And also Matthew 20:9, and/or What’s the Origin of the Phrase “The Eleventh Hour.”)

Re: “Eleventh-hour hubbub.”  For one take, see the Fox News claim.  For another take, see ‘The FBI is Trumpland’: anti-Clinton atmosphere spurred leaks, sources say.

Re:  “President’s Club.”  The full title: The Presidents Club:  Inside the World’s Most Exclusive Fraternity, by Nancy Gibbs and Michael Duffy.  The quotes from the book are from the “October Surprise” section, from page 236 to 249. See also “Brother from another mother” and other ex-Prez tales.

The “Thieu” image is courtesy of Nguyễn Văn Thiệu.jpg … wikimedia.org.

The lower image is courtesy of Vietnam War – Wikipedia.  The caption:  “Marine gets his wounds treated during operations in Huế City, 1968.”