Moses at the Battle of Rephidim:  “If I let my arms down, the other team will win!“

It’s time to lighten up a bit.  Which is being interpreted:  “It’s time to take a break from the election coming up.”  That is, it’s time to talk about something really important:

Which is another way of saying we’re halfway through October – Week 9 of the college season and Week 7 for the NFL – and have yet to talk about those 2016 seasons.

And to talk about practices that affect those seasons, like sport superstitions.

For an example of a former player’s superstition:  Michael Jordan – who graduated from North Carolina – used to wear his blue North Carolina “shorts” under his Chicago Bulls uniform, for good luck.  Always.

I wrote about such superstitions in last year’s Was Moses the first to say “it’s only weird if it doesn’t work?”  But that post focused on those superstitions which were practiced by sport-team fans.

And this one will too…

And you may even have been asked the direct question:  “Do you really think that what you did” – or didn’t do – ” affected the outcome of that game?”  But now – after reading this post – you have a ready answer:  “Hey!  I’m just doing what Moses did, in the Bible!”  (Or you can say, “I’m just following in the footsteps of Moses,” as illustrated in the painting at the top of the page.) 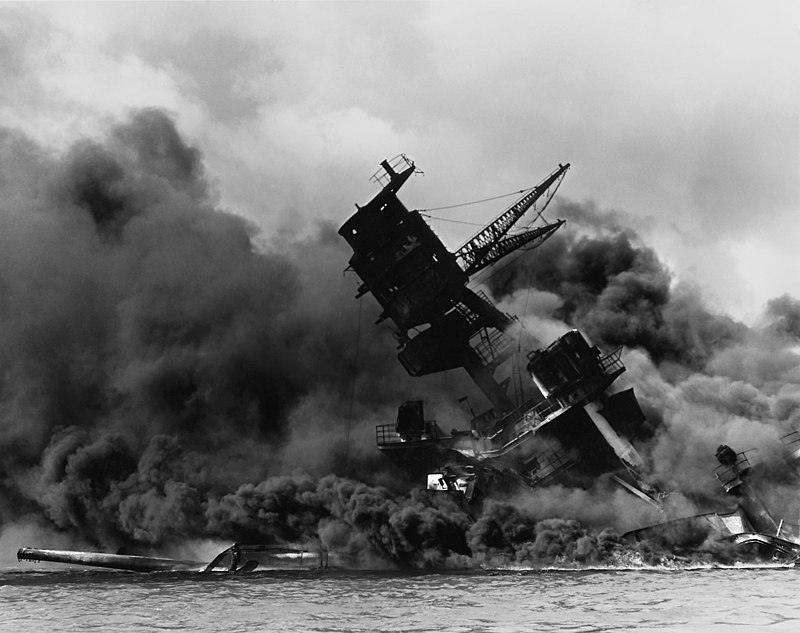 The ancient Children of Israel had just Crossed the Red Sea, during the Exodus.  They emerged at Rephidim, near Mount Sinai.  (Where the Water From the Rock happened.)

That’s when the dreaded Amalekites – who would become Israel’s archenemy – launched a sneak attack.  (Not unlike Pearl Harbor, shown at left.)  Verses 8 to 16 – in Exodus 17 – then tell the story of Israel pulling off  an “upset of the season.”  You might say they beat a hated arch-rival, thanks to Moses and his “superstition:”

Moses, Aaron, and Hur went up to the top of the hill.  Whenever Moses held up his hand, Israel prevailed; and whenever he lowered his hand, Am′alek prevailed.  But Moses’ hands grew weary; so they took a stone and put it under him, and he sat upon it, and Aaron and Hur held up his hands, one on one side, and the other on the other side;  so his hands were steady until the going down of the sun.

Which – it has been noted – sounds a lot like a modern-day football fan.  (Who – watching his team on TV – may move around the room, or change the way he stands, or sits.  Or – and I’ve done this myself – he may mute the sound on the TV, if that “brings the team good luck.”)

But always – always – the goal is to “help your team win.”  (In the case of Moses, his “team” started winning when he held his arms up, but started losing if he let his arms down.)

Again, I wrote about this at length in last year’s Was Moses the first to say “it’s only weird if it doesn’t work?”   (Which included the photo of Notre Dame’s Touchdown Jesus, at right.)

For an update, see Superstitious sports fans abound, posted on October 20, 2016.  The article started with this question:  “Are you superstitious about your sports teams?”  Bill White then wrote of an incident several years ago, about “no turnovers so far:”

At one point in the NFC Championship Game, it occurred to me that there had been no fumbles or interceptions [in the game].  I nearly blundered into mentioning this to my wife while the Eagles had the ball, a terrible jinx, but I caught myself…

He caught himself because his team – the Eagles – had the ball.  So instead he waited until the other team had the ball:  “‘No turnovers yet in this game,’ I mentioned casually.”  Sure enough, on the very next play the opposing team’s quarterback threw an interception.

And who hasn’t seen that happen?

White joked at one point, “It’s a good thing I use the powers only for good, not evil.”  He added:

I suppose there are readers who think superstition is stupid, and that the players alone determine the outcome…   I thought some of you sports fans out there would  be able to relate, and the rest of you can just make fun of us.

Or not.  Which is another way of saying that for all the grief we get – for our “idiosyncratic quirks” – we rabid sports fans do get some benefits.  See for example, Why We’re So Superstitious | Psychology Today, which concluded with this proviso, limitation or quid-pro-quo:  “The upshot of this research is that it’s important to distinguish between the controllable and uncontrollable events in your life.”  On the other hand, there are those benefits:

Sports fans, for all the ribbing they take, do have some decidedly positive mental health advantages over non-fans.  Evidence cited by [Kent State researcher Shana] Wilson and her co-workers supports the idea that fans who strongly identify with a team, particularly a local one, are less lonely, feel happier, and feel better about themselves.

On the other hand, there are those people who “think superstition is stupid.”  And there are those people who say things like such fan superstitions are “ignorant, embarrassing, and frankly [make] me a little pessimistic about humanity.  Do you really think that wearing that unwashed jersey [or undershorts] will help your team win?”  To which I will respond, hereinafter:

“Hey pal, tell that to Moses!”

The upper image is courtesy of Rephidim – Wikipedia, the free encyclopedia.  The caption:  “Moses holding up his arms during the Battle of Rephidim, assisted by Hur and Aaron, in John Everett Millais ‘Victory O Lord! (1871).”

Re:  Sports Superstitions.  Aside from the article in Fact Monster, you can Google the term “sports superstitions.”  I did that and got some 1,040,000 results.  And for an interesting treatment of the phenomenon, see BBC – Future – Sporting superstitions: Why do we have them?

Re:  “Provisos, limitations and quid-pro-quos.”  See Quotes from Movie Aladdin :: Finest Quotes.  The image of the Genie – with Robin Williams using the voice and mannerisms of William F. Buckley Jr. – is courtesy of Image – Aladdin-disneyscreencaps.com-4574.jpg – Disney Wikidisney.wikia.com.

The lower image is courtesy of www.reddit.com/r/nfl/comments/3o00dy/jeff_fisher.  See also www.packernation.com/its-only-weird-if-it-doesnt-work-of-game-day-superstitions.  That’s where the quote came from: “Athletes know it, fans know it, and even Bud Light knows it….”