This time last year – October 4, 2017 – my Utah brother and I were hiking the Camino de Santiago in Spain.  Specifically, on this day in 2017 we managed to hike into León, for our second one-day break after 20 days of hiking. We got to the PENSION BLANCA B&B fairly early in the afternoon, and could then start relaxing.  Or at least easing our aching feet…

Just the day before – October 3 – we hiked from Reliegos to Puente Villarente – shown above right – some 7.5 miles shy of León.  (See also the blurb on the hike from El Burgos Raneros to Mansilla de las Mulas.)  I know because I wrote in my journal, “We hiked 7.5 miles today.”  So again, we got to the PENSION BLANCA in León early in the afternoon, and started relaxing.

The other good news was that we were finally done with the Meseta part of the hike.  Which brings up the picture at the top of the page. [“Now defunct.”] The caption:  “Tom heading back to the Camino. Which gives an idea of the landscape we’ve been hiking through.” That hiking-through was on the Meseta Central plateau part of Spain – and it’s dry, dusty and hot. In fact, it’s the part that some people recommend Camino pilgrims skip.  (If they want to be all “wussified.”)

So the Meseta part of the hike presented its own “fresh hell,” its own set of fresh challenges.  But hey, that’s what a real pilgrimage is all about.   A “journey or search of moral or spiritual significance,” as shown at left.  Or in other words, “Finding yourself.”

Anyway, by October 4th we’d already hiked from Pamplona for 20 days, and ended up in León.  We’d hiked 250 miles.  And aside from taking a day off in León, we got our rented 15-speed mountain bikes.  With them we covered the remaining 200 miles to Santiago de Compostela in seven days.  Even though neither of us had ridden a bike in 40 or so years…

Before leaving for Spain – and the 450-mile hike-and-bike – I wrote about this pilgrimage-adventure in Training for the Camino and Going back “whence we came.”  (We started hiking from Pamplona on September 13 and got to Santiago October 12, 2017.)  Once I got back I did “Hola! Buen Camino!” – Revisited and “Buen Camino!” – The Good Parts.  (The latter because my brother thought “Camino – Revisited” was too negative.)   From the latter post I said this:

This is also a good time to mention that dinners on the Camino were universally delicious.  Most of the albergues featured a three-course special, including a salad, main course and choice of desserts.  Which may explain why – even though people said I looked thinner when I got back home – I actually weighed the same 160 pounds as when I left.

Also about this time – leading up to the Leon stayover – there was a mass shooting in Las Vegas.  Bill O’Reilly posted that that latest mass murder was “the price of freedom.”  I posted in response, “No Bill, putting up with dumbasses like you is the price of freedom.”

So much for a pilgrimage making you all kumbaya and hug-your-neighbor.  But we digress…

The point is that this time last year we were just finishing the dry, dusty Spanish Meseta part of our Camino hike.  But next year we plan something different.  We’ll go back for another hike, but this time on the Portuguese Camino, “a fantastic route for pilgrims looking for a more rural experience on the Camino de Santiago.”  And the “we” will include me, my brother and his wife.  Which means I’ll have to get my own lodging.  (So it’s time to start saving my pennies.)

I plan to fly into Lisbon, mostly because I’ve never been there but always wanted to visit.  The three of us will meet up in Porto; “gorgeous Porto with its colorful riverfront and home of Port wine.”  From there it’s a mere 161 miles to Santiago de Compostela, on a more-leisurely pace of ten miles a day, for 16 days or hiking.  (Who says you can’t can’t teach old dogs?)

Meanwhile, back in Leon, last year.  On October 5, on the day off, I found a McDonald’s restaurant, for a “little taste of home.”  And we practice-rode our rental 15-speed bikes.  I “didn’t fall down, and shifted gears without the chain coming off.”  But from there it wasn’t all smooth sailing.  On the ride out of Leon October 6, “my right handlebar took out – smashed the heck out of – the side-view mirror of some poor slob’s nice new car.”  In a second mishap:

I literally “ran my ass into a ditch…”  We were zooming downhill one afternoon.  I tried to adjust my left pant-leg, and the next thing I knew I was laying in a ditch, bleeding like a stuck pig.  And not just any ditch.  A nice deep ditch covered with thorns and brambles on the sides and bottom.  The “stuck pig” part came when my Ray-Bans gashed the bridge of my nose, causing it to bleed profusely…

See “Buen Camino!” – Revisited.  The point is:  We covered the remaining 200 miles to Santiago de Compostela in seven days, but not without some adventure.  (As illustrated at left, “An exciting experience that is typically a bold, sometimes risky, undertaking.”)

Which can be what a pilgrimage is all about.

So anyway, this time last year we were just coming off the dry, dusty Meseta part of the Camino Frances, in our case from Pamplona to Santiago de Compostela.  And who knows, maybe this time next year we’ll be finishing up our hike from Porto to Santiago.  Or somewhere in the middle, or maybe just starting out.  Which leads to this thought:

I’m sure the Portuguese Camino will have its own challenges, it’s own way of helping me “find myself.”  But considering we’ll be starting in Porto, at least the start should be happy… 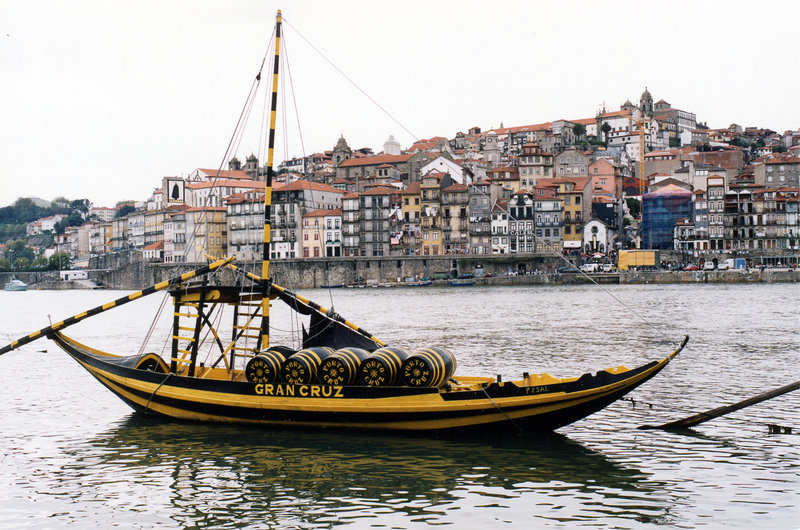 A Rabelo boat, used to transport barrels of port down the River Douro,” to Porto . . .

The original post included an upper image with the caption, “My brother exploring some ‘ruinas’ on the Camino de Santiago, this time last year (10/4).” But for some reason this “platform for publishing” substitutes an actual image with a block stating – for example “image may contain sky, outdoor, nature,” which does me no good and is quite aggravating. When that happens I usually delete the useless “info box,” and note – as here – what used to be there…

So here’s what I wrote in the notes in the original post: “The upper image is my photo, taken with a ‘tablet’ rather than a camera.  A word of advice:  Take a real camera.  It adds very little weight, while the tablet seemed to take forever to set up, meaning you really had to think ahead to get a decent picture.” And for more on the platform, see WordPress.com – Wikipedia.

Re “Now defunct.” See Is it now-defunct or now defunct? – Columbia Journalism Review. Which is an article I discovered while fixing the image screw-ups noted above. With this note:

The phrase “now defunct” is another journalism mannerism, a phrase not often spoken aloud. But we love it: It allows us to tell readers that this thing of which we are about to speak is no longer around.

Which leads to another photo that was in the original but is no more. I wrote of the image: “The image to the right of the paragraph beginning ‘This time last year’ is also my photo of the bridge for which Puente Villarente is named. ‘Puente’ means bridge and ‘Puente Villarente’ is four miles northwest of the ‘Mansilla de Las Mulas’ mentioned in El Burgos Raneros to Mansilla de las Mulas.  See also Camino Day 24: Puente Villarente to León 12km.

So, in correcting the “defunct image” mishap I actually learned something new, about the term “now defunct.” Which why I like blogging, even if only for my own amusement. Meanwhile, the rest of the notes “hereinafter” are as they appeared in the original.

Re:  “Different kind of hell.”  The allusion – as noted – is to Dorothy Parker‘s famously saying – whenever the door rang in her apartment – “What fresh hell is this?”  It’s also the title of Parker’s 1989 biography by Marion Meade.  See Amazon.com: Dorothy Parker: What Fresh Hell Is This?

Re:  “The part some people recommend.”  The actual title:  The Meseta – Walking the Camino de Santiago.  It says in part, “many people decide to skip this section of the Camino Frances entirely, which is a shame, because this part … has more to offer than meets the eye.”

The pilgrim image is courtesy of the Camino link at Pilgrimage – Wikipedia.

A note about the Camino Frances, in our case from Pamplona to Santiago de Compostela.  My brother opted to start at Saint-Jean-Pied-de-Port, the northern end of the “French Way,” after flying into Paris.  I opted to fly into Madrid and take a train to Pamplona, where we met up.

The lower image is courtesy of Port wine – Wikipedia.  The full caption:  “‘Rabelos,’ a type of boat traditionally used to transport barrels of port down the River Douro for storage and aging in caves at Vila Nova de Gaia near Porto.”  Also port wine is defined in pertinent part as…

… a Portuguese fortified wine produced with distilled grape spirits exclusively in the Douro Valley in the northern provinces of Portugal…  Fortified wine is a wine to which a distilled spirit, usually brandy, is added.  Many different styles of fortified wine have been developed, including Port, Sherry, Madeira, Marsala … and the aromatised wine Vermouth.

So that part should be fun…