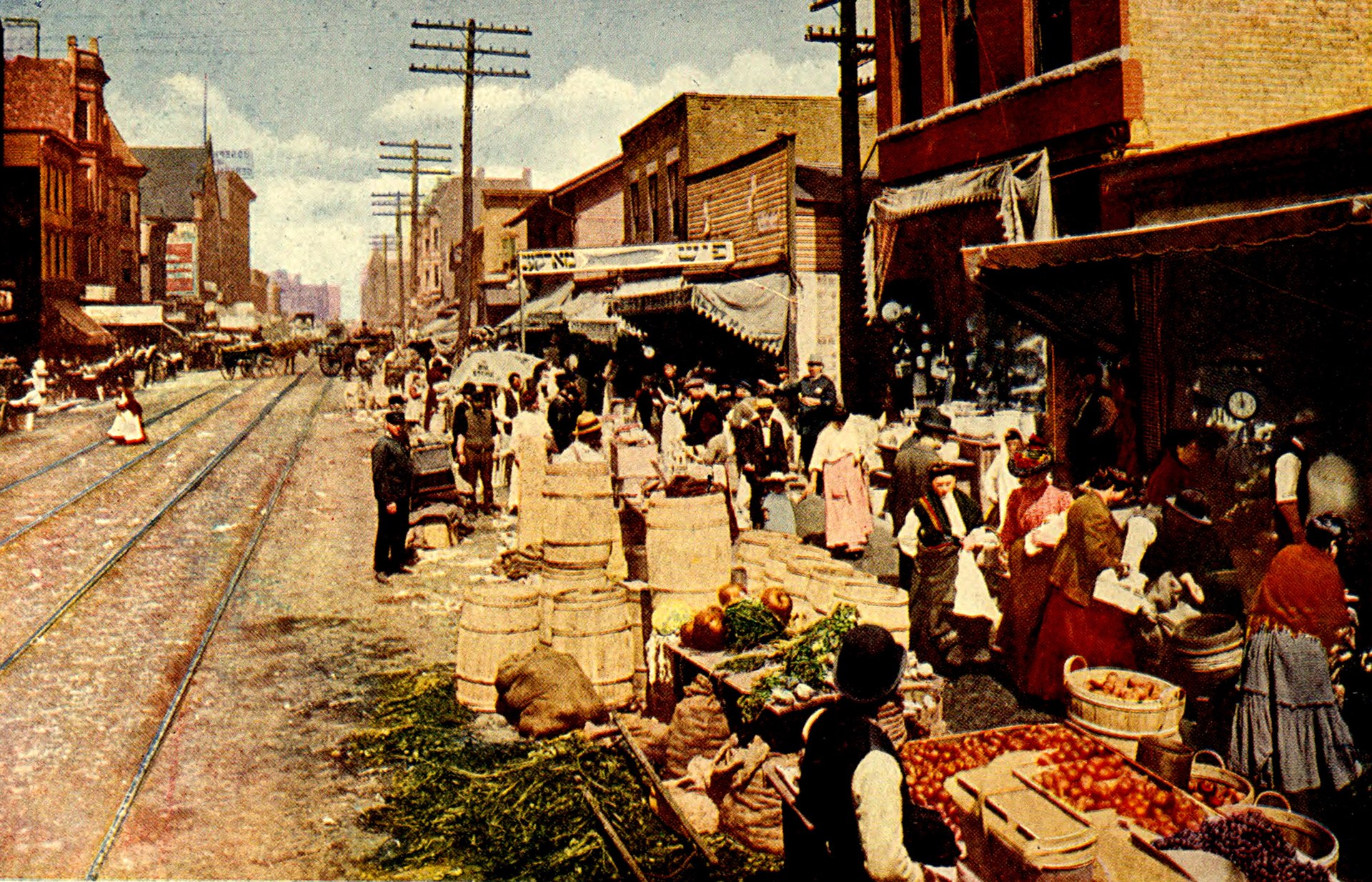 A Ghetto, like the one in New York City that Harry Golden grew up in, starting in 1904…

First off, the blog’s name honors the Carolina Israelite. For more on the connection, see the notes. But the long and short of it is that Harry Golden – even as he got older – chose to focus on the good parts of his own “rich tapestry of life.” He had his ups and downs, including a four-year term in prison for mail fraud. Nevertheless, he chose to focus on the good parts of his life, including but not limited to growing up in NYC’s Jewish Ghetto. The Israelite featured his musings on a number of topics, but his overall theme was that he still got a kick out of life.

And now a word about blogging in general. (Which is what Harry would be doing if he lived in this day and age.) Specifically, as to the why, see “20 Reasons Why You Should Blog.” Reason Number Seven is that a blogger can help others by sharing his experiences:

I’ve met countless people who have gone through a rough or difficult experience who then want to turn around and help others get through the very same thing…  Perhaps [a] personal failure (or triumph) … encourages you to write and share with others.  There’s just something within us that wants us to share those things to help others…

But the biggest reason – in fact, Number One on the list – is that you just like to write. And mostly I’ve wanted to write a newspaper column all my life. Of course there was a problem of definition during my college days. Like, when I went to my academic advisor – back in the 1970s – I told him I wanted to write essays.  He told me that “nobody reads essays these days.”

(Or “words to that effect,” a phrase made infamous by Richard Rich.)

Which brings up a note on the importance of defining your terms. What I meant to say was that I wanted to write newspaper-style columns, of which more in a bit. The point is that despite the advice of that advisor, I am now – at long last – fulfilling a life-long dream. The result? This Blog is basically a series of essays, masquerading as newspaper columns. (Which are in fact, a type of essay.) Which brings up the advantages of blogging over such column-essays, or the kind of writing Harry did. One big advantage is “links.” See for example What is Link ? Webopedia:

In hypertext systems, such as the World Wide Web, a link is a reference to another document. Such links are sometimes called hot links because they take you to other document when you click on them.

Of course if you weren’t interested in exploring such topics in greater depth, you could simply skip the links. On the other hand, one result of that “linkability” is that a blogger can keep his posts short. (For example, to keep the attention of readers with an “attention span of a gerbil.”) On the “other other” hand, such links allow a blogger to bring a depth to his post-essays that was simply not possible “in the good old days.” Beyond that, such links allow a blogger to make snide sotto voce asides to his reader in a way not be otherwise possible.

In other words, each column in this blog will include numerous links. Those links – computer links if you want to be technical – can take you to other sources, and thereby to added information to your heart’s content.  (Including  the link to the definition of “heart’s content.”)

Getting back to the subject of old-time news columns: Wikipedia said they meet the following criteria: 1) a regular feature in a publication, 2) “personality-driven” by the author, and 3) explicitly contain an opinion or point of view. See Column (periodical), and Columnist – Wikipedia:

A columnist is someone who writes for publication in a series, creating an article that usually offers commentary and opinions.  Columns appear in newspapers, magazines and other publications, including blogs.

So, the columns in this blog will contain an opinion or point of view.  As to whether they are personality-driven, I’ll leave it to the reader to determine.

Another note, I remember a column George Will – at right – did years ago. As I recall, he defined a columnist as a writer with three seductive skills: “be pleasurable, be concise, and be gifted at changing the subject frequently.”

That’s what I hope to do, in the style of Harry Golden. In doing so, I hope to expand on some of Harry’s work, such as Harry’s essay, “When adultery was proof of ‘loyalty.'”

Also, and as I noted in that post (updating Harry’s original):

Unfortunately, in Harry’s delightfully retro format – an old-time newspaper or newsletter – he couldn’t use the full-color pictures, flashy graphics and built-in links that we can use in today’s blogs.  So, this bit of a book review will be more than a bit of an update.

That post-update included a painting of “the transcendently beautiful and good-natured Nell Gwynn … lustily cheered in the streets … as ‘the Protestant Whore.'”

Which translates to:  Sometimes I really love my new job! 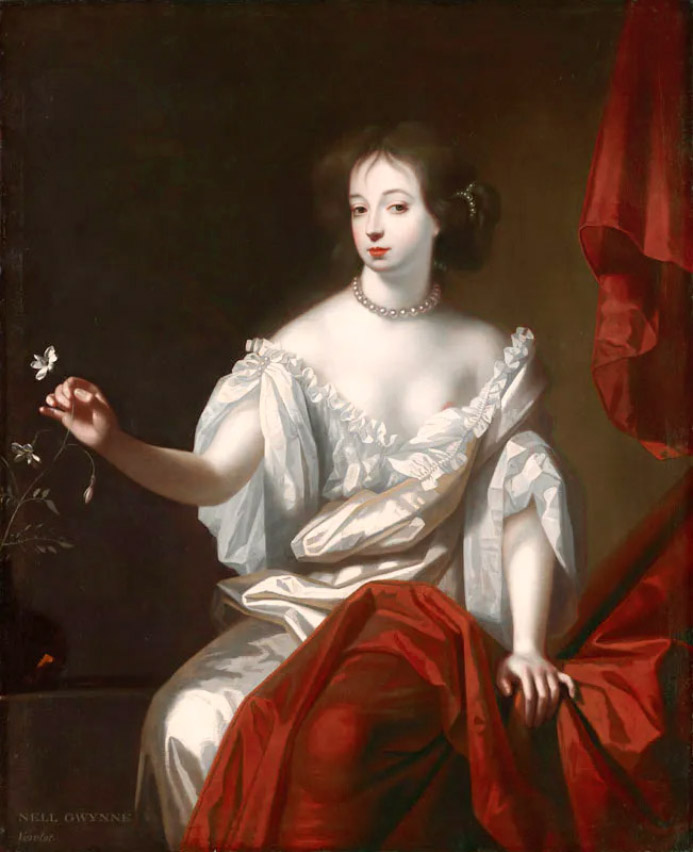 The upper image is courtesy of Ghetto – Wikipedia. The caption: “A scene of Maxwell Street in Chicago circa 1908. The title reads ‘THE GHETTO OF CHICAGO.’ The image has been colorized and is taken from a souvenir guide to Chicago printed in 1908. Note the signage in Yiddish that reads ‘Fish Market.'” (I tried to get a picture of New York’s Jewish Ghetto (courtesy of Ephemeral New York), but none was readily available in February 2022. I originally had an upper image courtesy of www.colby.edu/migrations/migrations-courses-2014-2015.

Re: More about the Israelite.  It was a small 1940s-50s paper done up by Harry Golden.  He grew up in the Depression in New York City‘s Lower East Side.  Then for some reason he moved to Charlotte, North Carolina.  That’s an area also known as the Deep South, “where cultural elements most often thought of as ‘Southern’ exist in their most concentrated form.”  (See also dichotomy.) So anyway, a raconteur is one who “tells anecdotes in a skillful and amusing way.”  Which means – again- that if Harry wrote today, “The Carolina Israelite would be done as a blog.” See About the name.

I also found these quotes about the Jewish Ghetto where Harry Golden grew up:

The word “ghetto” means “foundry” in the dialect of Venice, where Jews escaping the 1492 expulsion from Spain fled in droves.  They were allowed to settle there, but were forced to live in a segment of the city surrounded by both a wall and a canal that used to be the place where canons were forged.

The ghetto in New York was quite a different thing.  To start with, no law required the Jews to live there. They did so by economic necessity – and by choice.  The Jews who settled in the Lower East Side of New York came mostly from Eastern Europe. Like most immigrant groups, they preferred to live in an area where other people spoke their language (in this case, Yiddish), and sold the goods they preferred to use.  They also needed to be near sources of kosher food, synagogues, and ritual baths known as mitkva for the women.

The Lower East Side became a vibrant Jewish community.  Many men, women, and children worked selling wares (fruit, leather goods, ice) from pushcarts… There were newspapers published in Yiddish, a thriving Yiddish theater scene, and a wide variety of religious and social organizations established to help new immigrants.

The Wikipedia caption to the George Will picture: “George Will attending a Nationals–Cardinals baseball game, Labor Day 2006.”  On a related note, see also George Will’s had enough lying: His battle with Bill O’Reilly is finally an intellectual battle to reclaim the GOP from Fox News, and/or The Bill O’Reilly–George Will Feud Pulls Back the Curtain on a Civil War Raging at Fox News.

The lower image is courtesy of Nell Gwyn – Wikipedia. The full caption: “Portrait of Nell Gwyn (1650-1687), mistress of Charles II of England ‘In this portrait Nell is holding a six-petalled flower which has been identified as jasmine. As a flower painter, Verelst would have been familiar with jasmine’s structure and its traditional inclusion in portraits to signify the amiable nature of a sitter. Jasmine is well-known for its intoxicating scent, and this combined with its almost translucent petals and fragility.'” Note also there are a couple of au naturel paintings of Gwyn, “in all her glory.”