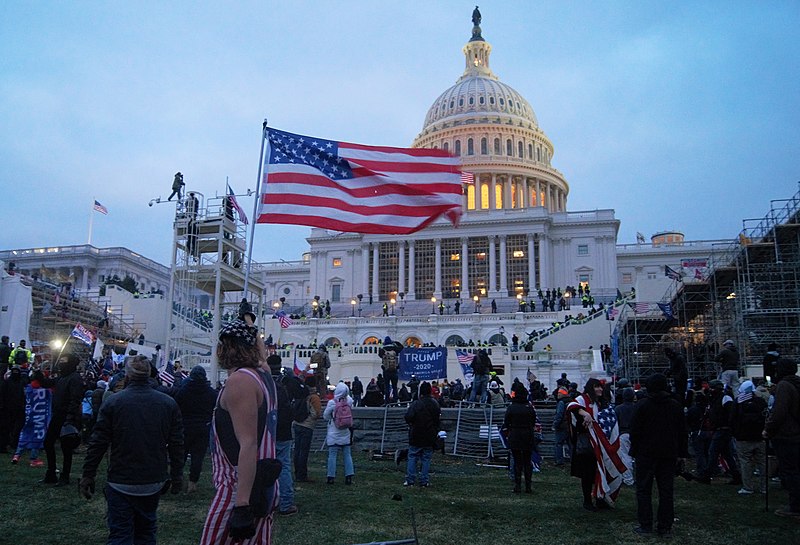 “Quiet, shy, moderate, nicey-nicey?” That doesn’t work in the face of armed insurrection…

I started this post back before the January 6 Capitol riot. That pre-riot post started, “Now that the Trump Era is almost over.” Which apparently isn’t quite true. Given the events of January 6 and after, we may be hearing a lot more – from or about – “the Donald.” (And maybe for a good long time to come.) But the quotation-and-link actually referred back to a post I did even before then. That is, on December 7, 2020. And early in that 12/20 post I added this:

Or at least now that his first run-through as president is almost over… (But see Trump’s Possible 2024 Bid Leaves Other GOP Candidates in a Bind.) So to repeat, “Now that at least the first incarnation of a Trump Era is almost over,” it’s time to start looking back.

The post went on to talk of “Year-End Reviews” and how helpful they can be. For one thing such reviews are “opportunities to learn from [your] mistakes and find a better way.” And so (I wrote, last December) “It’s that time of year to both look back and look forward. To look back at the Trump era – and especially at this past year – and to look forward to a new beginning.”

I wondered if Trump might “evolve into something neither his ardent supporters nor his rabid opponents expect.” I also wondered if “Showman Donald Trump” had actually played his “far-right conservative” supporters “like a piano.” And finally, I wondered if – given “Donald Trump’s chameleon-like shifting political positions” – he would “eventually be seen as an ‘effective elected official,’ or a funhouse showman?”

I supposed that the jury was still out on those questions. But four years later, “to be honest – I’m one of those people suffering from Trump fatigue.”  (And that was even before the January 6 Capitol riot.) I was – some months ago – “ready for it to be over.” And now it is over – more or less – so I’ll focus on some good thoughts, from some past posts…

Which means getting back to ‘Mi Dulce’ – and Donald Trump – made me a Contrarian.

To finish that thought: It’s been a long haul, but over the last four years I’ve evolved, from being a “moderate” (all “nicey-nicey”), to a Contrarian, and from there to an Independent. (Used in a sentence, “Why would anyone not want to be an Independent, like Moses and Jesus and me. (Oh my!)”)

By the way: I never would have said anything like that four years ago. Which is another way of saying that over the last four years I’ve grown more outspoken. Which was part of the process of struggling with how to deal with Trump supporters. Especially since one of them was “Mi Dulce,” now an ex-BGFE with whom I am now still in regular contact. (And using the term “girl” loosely.) As I often ended up saying to her – trying to get a word in edgewise – “I used to be all quiet and shy, all moderate and nicey-nicey. But not no more!*“

I.e., I had to learn to speak up and speak out with her, if only to get a word in edge-wise.

Which is one big benefit of Trump’s four years as president. (Along with making George W. Bush look like a frikkin’ genius, and making Obamacare popular again. As opposed to the arch-conservative plan, “let ’em die!”) Not mention proving how strong we are as a nation. (Like, we can elect someone totally unqualified as president, and not only survive but prosper… Well, aside from all the mass-shooting deaths,* not to mention a fumbled COVID response.)

But we’re digressing. Back to my personal development, based on four years of Trump. The point is, “No more ‘quiet and shy, all moderate and nicey-nicey.'” At the beginning of that journey, I found out that calling myself a moderate ended up sounding too wishy-washy. (As in “average in amount, intensity, quality, or degree.”) So I tried calling myself a Contrarian, in the mold of Ralph Waldo Emerson. (“Whoso would be a man, must be a nonconformist.”)

Or this: As someone who “takes up a contrary position, especially a position that is opposed to that of the majority, regardless of how unpopular it may be.” But that didn’t sound quite right either. I wasn’t always opposed to popular opinion. (For example, look at the “popular opinion” of 81 million American voters in the last election.) So eventually – over the last four years – I ended up changing from being a Contrarian to an Independent, “just like Moses and Jesus.” (See July 2019’s A reminder: “I’m an INDEPENDENT (Voter),” featuring the image above right. And which included a note that – to me – the word “Contrarian” translates to something like “pissed-off moderate.”)

Meanwhile, back to where it all started, with Mi Dulce’ – and Donald Trump making me an Independent. That post from November 2016 started, “It’s the eve of Election Day, 2016, and thus a time for reflection.” I said that no matter who won the election, the “’war for the soul of America‘ will go on. It will continue largely unabated.” As we have discovered.

I added some words of explanation: For one thing the Internet says Mi Dulce is Spanish for “My Sweet,” and that’s what I called “the lady I’ve been ‘dating’ some time now.” (As well as after we parted ways for good, at least “that way.” Example: As of November 2016 she had “broken up with me at least 10 times,” in part because of her “ardent conservativism.” (A more polite term than “Trumpie,” “Trump-humper,” Trumpanzee,” or “right wing wacko.” RWW for short.)

Getting back to Mi Dulce: When we first met, I was “moderate and nicey-nicey.”  (Like Aristotle.) I used to say – or at least think – things like, “Let’s not rush to judgment!”  Or, “Let’s wait until we get all the facts before we say anything that might be taken the wrong way!” However:

The problem is that in my neck of the woods – especially with … Mi Dulce – that moderate, reasoned, common-sense approach will get you nothing but bowled over. [As in] hearing something so “whacked” that you are rendered temporarily speechless with disbelief.

And I learned one more thing about RWWs. They tend to use the 8-track mode of public discourse. If you’re under 65, you probably don’t remember this “magnetic tape sound recording technology,” popular in the U.S. from the mid-1960s to the late 1970s. (That’s when “the Compact Cassette format took over.”)

The thing about 8-track tape-recordings was that they never stopped. You never got to the end. They used a “continuous loop” system. That’s why they didn’t have a rewind option. As long as you played the tape, you got the same thing over and over again. The same “data,” the same songs played in the same order over and over again. Which I thought was “pretty much like trying to have a meaningful conversation with a right-wing wacko…”

Which I thought at the time should make it easy to figure out how to best an RWW in an argument. (In the good sense, as in a “form of expression consisting of a coherent set of reasons presenting or supporting a point of view.” Note the operative word, “coherent.”)

But I was wrong. Those RWW’s never cease to amaze me. Like if I get stuck watching some FOX News – ordering my morning iced coffee at a local McDonald’s – I find myself thinking, “Do you guys ever get tired of lying?” The answer? Apparently not. See for example, Donald Trump Has Told A Truly Disturbing Number Of Lies Since Taking Office, and since the 2020 election as well. And his attorneys have taken up the “creative lie” method as well. See Trump’s Impeachment Defense: One Long String of Lies (Broken Up by Madonna Clips.) With one note, “In fairness, their client is guilty beyond a shadow of a doubt, so they didn’t have much to work with.”

Which means the rest of us have to adapt or perish. The good news? We – the “rest of us” – already know how to adapt. As Darwin said, it’s not the strongest or smartest people who survive. It’s those who can best adapt or adjust to a changing environment. Which spells bad news for Trumpies, Trump-humpers or Trumpanzees. They are the people least able to adapt or adjust to changing circumstance. (For example, refusing to wear masks at mass rallies.)

All of which could be great news for the rest of us!

The upper image is courtesy of the Wikipedia article on the January 6 Capitol riot.

Another note from “the eve of Election Day, 2016… Whatever the outcome tomorrow, we’re in for more turmoil.  The “war for the soul of America” will go on. It will continue largely unabated… [W]hoever becomes the next president, he or she will face rabid hostility from close to half the American population.  Which means in turn that he or she will face the prospect of impeachment, or at least a realistic threat of impeachment.” Emphases in original.

The “lions and tigers” image is courtesy of Lions And Tigers And Bears Wizard Of Oz – Image Results.

Re:  “I used to be all quiet and shy, all moderate and nicey-nicey. But not no more!” I used the vernacular improper English for emphasis.

RE: “W” as a genius. See Bush says Trump ‘makes me look pretty good’ by comparison.’

Re: “Adapt or perish.” The link is to Adapt to Change or Perish. Because those are your only options. The full Charles Darwin quote is below, but the article added the saying by H. G. Wells, “Adapt or perish, now as ever, is nature’s inexorable imperative.” The full Darwin quote:

It’s a pretty good article on the constancy of change, something “we” need to be reminded of. (Especially those of us turning “the Big Seven-Oh” next July.) With added thoughts like: “Progress keeps picking up speed…the complexity of our world keeps on increasing…and the rate of change keeps on accelerating.” And “Let’s just accept the fact that our careers will be lived out in a state of constant transition.” And that we should therefore “prepare for a work environment that is fluid, fuzzy, and fast.” And finally that we will “forever be surrounded by uncertainty and instability.”

Which is why I love blogging. “It’s so frikkin’ educational!”

As for that “great news for the rest of us” comment. It was a joke. See 11 times Trump’s offensive comments were ‘just a joke.’ Including “Trump floats injecting disinfectent as coronavirus cure,” “I am the Chosen One,” and “Obama is the ‘founder of ISIS.'”

A large part of the country suffers from Trump Fatigue Syndrome. This is related but not identical to Trump Derangement Syndrome. The sufferers of Trump Fatigue aren’t driven mad by the president. They are just tired of having to wake up every morning to another of his sudden attacks, reversals, exaggerations, and boasts. They want the show to end.

As to that fatigue, the link in the main text is to Trump fatigue is setting in hard at the worst moment for his campaign, posted two weeks before the 2020 election. But see also the thoughtful piece from November 8, Democrats counted too heavily on ‘Trump fatigue,’ to explain why and how “former Vice President Joe Biden’s expected landslide turned into a grim, nail-biting election.”