Consider this a follow-up to my last post, On that nail in my right eye.  (Which included the image at right, of character actor Jack Elam.)  Taken together these two posts might lead you to consider me as among the walking wounded.  (Which is pretty much how I’ve felt the last several weeks.)  But the “nail in the eye” incident happened six or seven years ago, and in April is scheduled to be corrected by some new-fangled surgery.

The “pain in the back” is of more recent vintage, and in fact came perfectly timed for Lent.

Now about that “pain in the back.”  Unfortunately,  I’m not speaking metaphorically.

I actually did “throw out my back,” last Thursday, March 2.  That was only three days after my last post, Nail in my right eye.  And the reason that was my last post is because – ever since – I’ve been unable to sit at my “laptop” desk at home for more than a few minutes at a time.

Briefly, a forced march involves a long period – many miles – of alternating periods of walking and running – or jogging for older folk – but with increased resistance provided by a heavy pack.

In my case, on the Camino itself I hope to maintain a pace of 20 minutes per mile, with about 20 pounds of pack weight.  So for training purposes, I started experimenting with cycles of one minute – 85 steps – of jogging, followed by a number of minutes walking to set that pace.

And all the while wearing a 22-pound weight vest.  (Like that at right.)

The problem – I figured out later – was that the weight vest was a bit too loose, so that my back got a constant pounding.  (Much in the nature of a series of kidney punches, as I also figured out later.)  There were warning signs, including the fact that it hurt to breathe during those minutes I was jogging.  Unfortunately, I succumbed to the temptation to “Walk it off, Nancy!”

Which is another way of saying that I’ve been paying for it ever since.

And which is a big reason why my “pain in the back” came perfectly timed for Lent.

According to Wikipedia, Lent is devoted to prayer and penance – as seen at left – along with “repentance of sins, almsgiving, atonement and self-denial.” And of course one big reason for people to undergo that Season of Lent is to “draw themselves near to God.”  So what better way to draw near to God than to suffer – like Paul – a thorn in the flesh, to “buffet me” and to “keep me from exalting myself?”

Or like they say on TV, misery builds character.  So here I sit, not at my “laptop desk,” but rather in my easy chair, using a Jury rigged system to type through the tears and the back-pain.  (Courtesy of a pillow for my laptop – which makes for awkward typing – along with a side TV stand for the mouse, plus a heating pad for my back.)

Which brings up an interesting side note about Lent.  There are actually 46 days between the beginning of Lent – on Ash Wednesday – and Easter Sunday.  That’s because Sundays don’t count in the calculation.  Sundays in Lent are essentially “days off,” when you can still enjoy whatever it is that you’ve given up for Lent.

That fact got overlooked by the writer/producers of 40 Days and 40 Nights, as shown in the image below.  That was the 2002 romantic comedy film which showed the main character “during a period of abstinence from any sexual contact for the duration of Lent.”  (As noted, the main character could have “taken Sundays off.”)

Or in case I’m being too subtle, the writer/producers of 40 Days and 40 Nights didn’t know – or didn’t care – that under the rules of Lent, the Josh Hartnett character could have had sex one day a week during those “40 days and 40 nights.”  (Dang Hollywood liberals!)

But we digress.  The point is that – thanks to my misguided “forced march” back on March 2 – I now have my own thorn in the flesh, as part of my 2017 Lenten spiritual discipline…

Still, I hope to get back on schedule over the next week or so.  (The new president has given us so much to write about, and I’m still trying to figure out which one is the Bizarro Trump…) 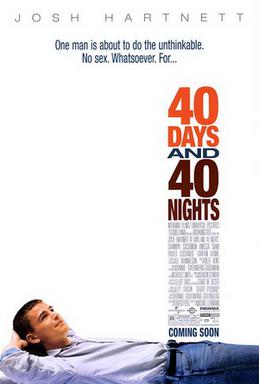 The upper image is courtesy of Back-Painemdocs.net.  Although the article concerned pediatric back pain – back pain suffered by “infants, children, and adolescents” – it did note that the “incidence of back pain increases with age.”  Also re:  “Threw out my back.”  See also Throw Out Your Back? 8 Tips to Help You Recover, which includes steps I wished I’d taken three weeks ago.

“Note” also that an asterisk in the main text indicates a statement supported by a reference detailed further in this “notes” section.  Thus as to “As noted in September 2016,” the reference (*) is to the post “Starting back with a bang,” in my companion blog, dorscribe.com.  It told of the near-six-weeks last summer that my brother and I spent “hiking the Chilkoot Trail – ‘meanest 33 miles in history‘ – and canoeing 440 miles on the ‘mighty Yukon River.’”  I ended that post by noting I would “talk more about that [projected journey] – and pilgrimages in general – in St. James, Steinbeck, and sluts.”

The weight-vest image is courtesy of Amazon.com: weighted vest.

Re:  “Forced march.”  See Loaded march – Wikipedia, which noted that in the U.S. Army, a forced march for training purposes means covering 12 miles in three hours, while carrying 70 pounds including pack.  (Meaning four miles per hour, whereas I was considering an average of three miles per hour on the Camino, carrying no more than 20 pounds, or 10% of my body weight.)  Also, in the French Foreign Legion, a forced march meant covering five miles in 40 minutes, while carrying a 26-pound pack.  After describing other, longer types, Wikipedia noted:

Troublemakers are made to place extra rocks in their backpacks for the duration of the marches.  Further in the training of a “Caporal” there is a 100 km march which must be completed in 24 hours.

Re: “Penance [as seen at left].”  The image – of “Saint Peter Repentant” – is actually under contrition in the Wikipedia article on penance.  The painting (1823-25) was by Francisco Goya.

Re:  “The Josh Hartnett character could have had sex one day a week during those ’40 days and 40 nights.”  As noted, that observation concerned only the “rules of Lent.”  That wouldn’t include the standard religious rules and/or guidelines concerning fornication.  See Wikipedia, which included the note that “a minority of theologians have argued in more recent times that premarital sex may not be immoral in some limited circumstances.  An example is John Witte, who argues that the Bible itself is silent on the issue of consensual, premarital sex between an engaged couple.”

Re:  “Hollywood liberals.”  But see Five reasons Hollywood is not a bastion of liberalism.  The Washington Post article noted that “the Hollywood right – led by Louis B. Mayer, George Murphy, Ronald Reagan, and Charlton Heston – has had a greater impact on American political life.  All four men helped lay the groundwork for the conservative revolution of the 1980s…”

The lower image is courtesy of 40 Days and 40 Nights – Wikipedia.  One caption for the image:  “The text set is in a phallic column extending from Hartnett’s crotch.”