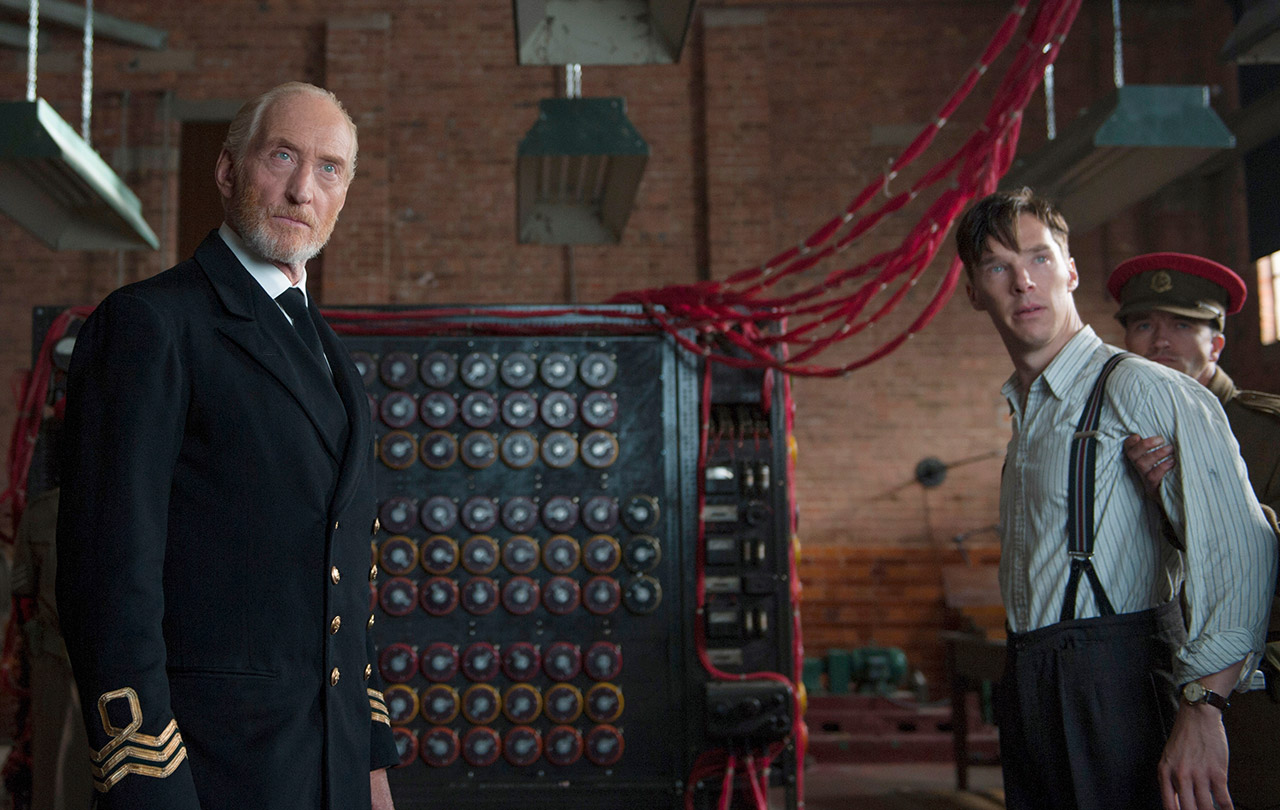 I confess – I “do not deny but confess” – that I’ve been lax in posting new essays for this blog.  One excuse is that I’ve been focusing more on my art.  (For one thing, I’ve finally gotten to the point – after 66 years – that I actually feel like I know what I’m doing when oil painting.)

Be that as it may, it’s high time to publish another post.

In this case, I’ll re-visit a previous quasi-movie-review of The Imitation Game:

[The] 2014 historical thriller film about British mathematician, logician, cryptanalyst and pioneering computer scientist Alan Turing who was a key figure in cracking Nazi Germany‘s naval Enigma code which helped the Allies win the Second World War, only to later be criminally prosecuted for his homosexuality.

That’s what I cited in the April 2015 post, On Oscar Wilde and “gross indecencies.” The gist of that post was that two men of arguable genius – Turing, and Wilde (in his way) – got persecuted during their lifetimes.  Only after they had died did people come to realize their genius.  (In Wilde’s case he “now brings tourists to Dublin,” as seen at right.)  In the case of another writer, John Steinbeck noted:

But we digress…  Getting back to The Imitation Game, I first saw the film – in a movie theater – in January 2015.  But I recently checked out a DVD copy from the local library, and started viewing it again, in segments.  That is, I haven’t had cable TV since June 2016.  (That’s when I got back from my grandson’s high-school graduation and found a TV screen with no picture  My cable provider ended up saying I had two choices:  Pay a one-time $50 fee to have a technician check out the problem, or pay another $8 a month.  I said, basically, “No, there’s a third option…”)

So since June 2016, I don’t watch TV;  in the morning, or after a hard workout, or at night trying to wind down.  Instead I watch classic movies, on DVD, in segments.  And soon after starting to watch this film, I began to wonder, “Where was the evidence that Turing was homosexual?”

In this morning’s episode, I found out.

For one thing, the film opened – well after World War II – in 1951, with an apparent break-in at Turing‘s home,   Two police officers investigated, during which the lead officer got suspicious because of Turing’s secrecy.  In due course the “sidekick” followed Turing and discovered him making an “assignation.”  (With a younger “poofter,” who confessed his wicked ways.)

More to the point, the film then flashed back to World War II.  To the point where Turing had to propose marriage to the lone female code-breaker, Joan Clarke.  (Played by Keira Knightley, at right.)

That was because she was invaluable to the team of code-breakers, but her parents frowned on her being so alone, with all those men, “and unmarried.”  (I.e., Turing wanted her to stay and help break the Enigma code that would help the Allies win World War II.  Times were different then, and besides, the code-breaking project was top secret.)

At the engagement party at a local pub, Turing was troubled by the upcoming nuptials, and of course the wedding night itself.  Fellow code-breaker John Cairncross asked him why.  Turing responded, “What if I don’t fancy being with her, that way?”  Cairncross responded, “Because you’re a homosexual.  I suspected as much.”  He then warned Turing to keep his homosexuality a secret.  For one thing, “because it’s illegal.”  For another, “Denniston‘s looking for any excuse to put you away.”  Which brings up the need for some more background:

When Britain declares war on Germany in 1939, Turing travels to Bletchley Park, where, under the direction of Commander Alastair Denniston, he joins the cryptography team of Hugh Alexander, John Cairncross, Peter Hilton, Keith Furman and Charles Richards.  The team are trying to decrypt the Enigma machine, which the Nazis use to send coded messages.

For some further background, Denniston was “first head of the Government Code and Cypher School (GC&CS).”  He was first appointed “operational head of GC&CS in 1919 and remained so until February 1942.”  Which may explain his hostile attitude toward Turing.

That is, throughout the film Commander Denniston basically hated Turing’s guts.  For one thing, when he tried to fire Turing, the “poof” went over his head and wrote to Winston Churchill.  (Seen at left, in 1904.)  Churchill in turn put Turing in charge of the code-breaking project.  Which resulted in this anomaly, or at least oddity:  The “spymaster” who’d headed the British Government Code and Cypher School since 1919 didn’t realize Turing was a “poof,” but a lowly fellow code-breaker did?  (It also turned out that Cairncross was a Russian spy.)  Which led to this, my first response to the Turing-Cairncross exchange:

With spymasters like that, it’s a miracle we won the frikkin’ war!!

Notice that my first response was not to ask why I didn’t remember the parts in the movie that showed Turing was gay.  I didn’t wonder, “Why did I have to ask myself, ‘Where was the evidence that Turing was homosexual?’”   But then, I never claimed to be either a super-spymaster or a master code-breaker.  Then too, I may have been hearing too much from that Donald Trump guy, and gone into Auto Attack Mode.  (“It was somebody else’s fault!”)

But maybe – just maybe – “there’s a third option…”   Maybe I had a repressed memory.

The truth is, Oscar Wilde and “gross indecencies” was a pretty depressing post.  Wilde went from the heights of fame and pleasure, literally to “the depths.”  From being one of the most successful playwrights of Victorian London, to his arrest, trial and conviction for gross indecency.  And after Alan Turing’s own arrest and conviction, he got the “choice” of spending two years in prison or undergoing court-ordered chemical castration.  The treatment left him impotent, and two years later – in 1954 – he committed suicide by cyanide poisoning.

On the plus side, in 2003 the U.S. Supreme Court issued Lawrence v. Texas.  (Over the objections of many conservatives.)  The Court held that “intimate consensual sexual conduct was part of the liberty protected by substantive due process under the 14th Amendment.”

And Britain – in 2017 – passed the Alan Turing law.  That law allowed pardons for men “cautioned or convicted under historical legislation that outlawed homosexual acts.”  And as Wikipedia noted:  “As of January 2017, some 49,000 men had been posthumously pardoned under the terms of the Policing and Crime Act 2017.”

I suppose that’s some kind of progress…

Re:  The Winston Churchill photo to the left of the paragraph beginning “That is, throughout the film…”  Not to be unkind, but in that photo Churchill looks to be a bit of a “poofter” himself.  (To which I might add, “Not that there’s anything wrong with that!”)  Then of course there was Churchill’s famous quote, “The only traditions of the Royal Navy are rum, sodomy and the lash.”

The lower image is courtesy of Alan Turing – Wikipedia.  The caption:  “Statue of Turing by Stephen Kettle at Bletchley Park, commissioned by Sidney Frank, built from half a million pieces of Welsh slate.”  Two more notes:  1)  “In 1941, Turing proposed marriage to Hut 8 colleague Joan Clarke, a fellow mathematician and cryptanalyst, but their engagement was short-lived.  After admitting his homosexuality to his fiancée, who was reportedly ‘unfazed’ by the revelation, Turing decided that he could not go through with the marriage.”  And 2)  “In August 2009, John Graham-Cumming started a petition urging the British Government to apologise for Turing’s prosecution…  The petition received more than 30,000 signatures.  The Prime Minister, Gordon Brown [issued] a statement on 10 September 2009 apologising and describing the treatment of Turing as ‘appalling.'”