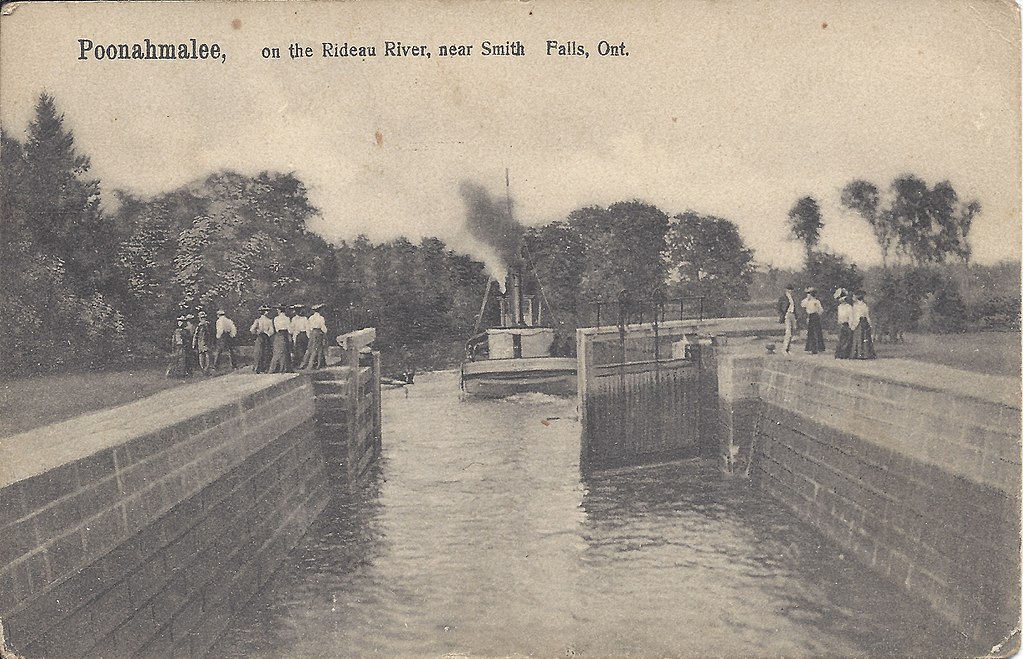 Taking a break from Politics:  My next big adventure is coming up in August.

My Utah-brother and I will be paddling – some six to 10 days – up the Rideau Canal, from Kingston to Ottawa, Ontario.  (This is the same brother with whom I canoed 12 miles off the coast of Mississippi in 2014, as seen at right  And 440 miles on the Yukon River.  And hiked the Chilkoot Trail – “the meanest 33 miles in history” – and most recently hiked and biked 450 miles on the Camino de Santiago.)

But don’t let the “canal” name fool you.  (Or the photo at the top of the page.)

This Rideau “Canal” is a water route of “mostly natural waters, made up of lakes and rivers.”  Of the 125 miles on this “canal,” only 12 – about 10% – are “manmade locks and canal cuts.”  The rest of the route consists of “natural waters,” as noted.  That includes Big Rideau Lake, some 20 miles long and over three miles wide.  (For comparison, Lake Laberge on the Yukon River – which we paddled in 2016 – is 31 miles long and up to three miles wide.)

The direct route from Kingston to Ottawa is 125 miles, but that includes over 677 miles of shoreline.  (Most choose that route because the prevailing winds are from the southwest.)

Also, from Lake Ontario at Kingston the route rises 166 feet.  It rises to the “summit of Upper Rideau Lake,” from where it then descends 275 feet to the Ottawa River at Ottawa.

The construction of the Rideau Canal was a preventive military measure undertaken after a report that during the War of 1812 the United States had intended to invade the British colony of Upper Canada via the St. Lawrence River, which would have severed the lifeline between Montreal and Kingston.

Then there’s this added note:  “It is the oldest continuously operated canal in North America.  Most of the locks are still operated by hand, using the same mechanisms that were used to operate the locks in 1832.”  (Speaking of “delightfully retro.”)

To give some perspective on how long such a canoe-trip can take, early voyageurs could cover the distance  in three days.  (But those were “very long days with lots of paddling.”)  And that would include portaging around the areas that have since been made locks and canal cuts.

Today the recommended pace is anywhere from six to 10 days, as noted.

And there are 26 lockstations to pass through.  Those you can either portage around – like the early voyageurs – or pay a fee.  They all have washrooms and potable water, and most offer camping.  (So it won’t be like canoeing 12 miles offshore, featuring eight days of primitive camping, on places like Half-moon Island, Ship Island, and “from time to time an occasional salt marsh.”)

Other notes:  The name Rideau is French for “curtain,” and comes from the “curtain-like appearance of the Rideau River‘s twin waterfalls where they join the Ottawa River.”  And:

The canal also served a commercial purpose.  The Rideau Canal was easier to navigate than the St. Lawrence River because of the series of rapids between Montreal and Kingston.  As a result, the Rideau Canal became a busy commercial artery from Montreal to the Great Lakes.  However, by 1849, the rapids of the St. Lawrence had been tamed by a series of locks, and commercial shippers were quick to switch to this more direct route.

Thus it “remains in use today primarily for pleasure boating, with most of its original structures intact, operated by Parks Canada.”  But it’s not all fun and games, necessarily.

One Canal-guide noted three possible issues:  Wind, waves and big boats.  As for the first, while the prevailing wind is from the southwest, “be prepared for anything,” including a change in wind from the northeast.  Also, waves can be an issue on big lakes, “with large sections of open water unprotected by islands.”  And such large waves “can be an issue for a canoeist.”

The same is true of “big power boats (cruisers)” which also share the waterway.

One idea (the guide said):  Paddle close to shore.  It’s more interesting – with more wildlife and such – and keeps you further from the waves produced by big boats.  But if you encounter one – here I’m writing under the “memo to self” idea – the general rule is to turn into such waves, meeting them head on.  This “can actually be fun in a kayak (not as much fun in a canoe).”

I’ll be writing more on this adventure, if only in the form of a postmortem.  (But not in the literal sense.)  Meanwhile, here’s hoping we don’t have to use this little maneuver this August… The upper image is courtesy of Rideau Canal – Wikipedia.  Caption:  “Poonahmalee, on the Rideau River, near Smith Falls, Ontario – October 1906.”

The “retro” image is courtesy of Delightfully Retro – Image Results.

The lower image is courtesy of How to Canoe (with Pictures) – wikiHow.