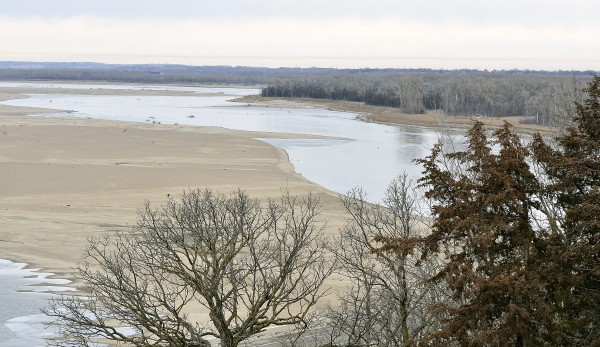 I just heard the Lower Missouri River near Sioux City was pretty low. Could it be this bad?

This just in! My brother-from-Utah – the one I have all the travel adventures with – just came up with a great idea. A canoe trip down the Missouri River, from South Sioux City, Nebraska, down to Omaha. (Depending on the current, it should take five to seven days.)

Which – I suppose – will also depend on how low the water is in that stretch of the Missouri. As to the question “could it be this bad,” the answer is: “That’s why they call it exploring!”

Google Maps says it’s a little over 1,000 miles to Omaha from my home in the Atlanta Metropolitan area. I’m supposed to be there by a Tuesday afternoon, which gives me three days to get there, leaving on a Sunday. As for routes, I decided to start by going  up I-75 through Atlanta. (On a Sunday morning the Beltway traffic shouldn’t be too bad.)

Then I’ll head northwest on I-24, up through Nashville and on to Clarksville, Tennessee, to stop there for the night. (Or late afternoon, since I’ll gain an hour crossing into the Central Time Zone.)

That’s as opposed to heading west on I-20, then up through Memphis (TN) and Missouri. That’s the way I went last December-January for my mid-winter trip to Utah. (See On my road trip out to Utah, from January 20, 2020, noted at right.) And by the way, all this – the canoe trip – is an alternative to flying back to Europe this upcoming September, to hike on the Camino Frances. (With all the Covid travel restrictions, that isn’t likely to happen. As to our September 2019 hike, see “Greetings from the Portuguese Camino!”)

Incidentally, Clarksville is where my aunt and uncle lived for a few years, back when I was anywhere from eight to 11 years old. But getting back to the three-day trip up to South Sioux City. There’s one big question: Will I be able to do any sightseeing? Either going up or coming back? For example, Sioux City (IA) has some interesting sites, including the Floyd Cemetery, 2500 7th Street. That should be open, but how about any museums?

Also, on the way up to South Sioux City I’d like to stop by Paducah, Kentucky. It’s got such a great name, and a lot of history as well. (Especially during “outset of the Civil War.”) Then there are some preliminary notes I made about the canoe trip itself.

Like, as usual, we’ll do mostly primitive camping. (As in “dig a hole and squat.”) But based on past canoe trips, I noted a town called Decatur NE, about 40 miles south of Sioux City. It has a Beck Memorial Park campground, plus some restaurants in town, in what seems to be easy walking distance from the river. And a Broadway Brothers and Green Lantern Steak House. And a Tooly’s Bottle Shop for that matter. (Although we usually carry our own “O Be Joyful.”)

Further downstream there’s a “Woodland Campground, 1447 Benton Ln, Little Sioux, IA,” between 50 and 60 miles from Sioux City. (44 highway miles from Omaha.) Plus wildlife areas and refuges, so camping shouldn’t be a problem. (Not that much “private property” to worry about.)

And a positive note or two: I’ll have some new advantages this canoe trip. Like a stadium seat for actual canoe-paddling itself. In the past I’ve suffered quite a bit from paddling hour after hour with no back support, and getting a variety of “butt rash” from the hard plastic canoe seat. This improvement is a bit iffy, but I’ll report back on the results after the trip.

The second improvement? For this trip I bought an Ozark Trail 6 Person Dome Outdoor Camping Tent, measuring 8-by-12 feet, instead my old 7-by-7 feet two person tent. Which means that with all that extra room I can sleep on my also just-bought-for-this-canoe-trip Coleman Trailhead II Camping Cot – at left – “extra wide military style.”

It “weighs a ton” – actually 17.7 pounds – but that brings up a big difference between canoeing trips and hiking trips. You can carry a lot more “luxuries.” (Unless of course you’re hiking the Camino de Santiago, in which case you can depend on stopping at an auberge or private hostel every night, and “only” have to carry ten percent of your body weight. Unless of course you get a “pansy pack” and have your big pack shipped ahead to your next stop, but we’re digressing here…)

Now about that bigger tent and fancy-schmancy cot. At first I had some doubts about the expense of buying these new items. Which I expressed in a preliminary email:

A folding cot would be nice, but I only have that small two-person tent. Of course I could get a bigger tent, what with my stimulus check and all, but I’m wondering how many more canoe trips we’ll be doing. (Cost-benefit-wise.)

To which my brother replied, “I too wonder about how many more canoe trips. But I would imagine we’d be able to canoe great distances longer (age-wise) than walk great distances.”

Which was a pretty good point. Another good point or so: I’m getting older, and I remember well trying to find a nice level spot to put my sleeping pad. Which usually ended up being not too successful. I usually discovered, after slinking in to my tiny “two person” tent, that there was always a big stick or rock, or set of sticks or rocks, that I hadn’t been able to find…

Which is why I sprung for the new tent and camping cot. Of course the Stimulus Check helped. That is, it provided me with some spending money, which I used to “boost the economy.”

Glad to help out! 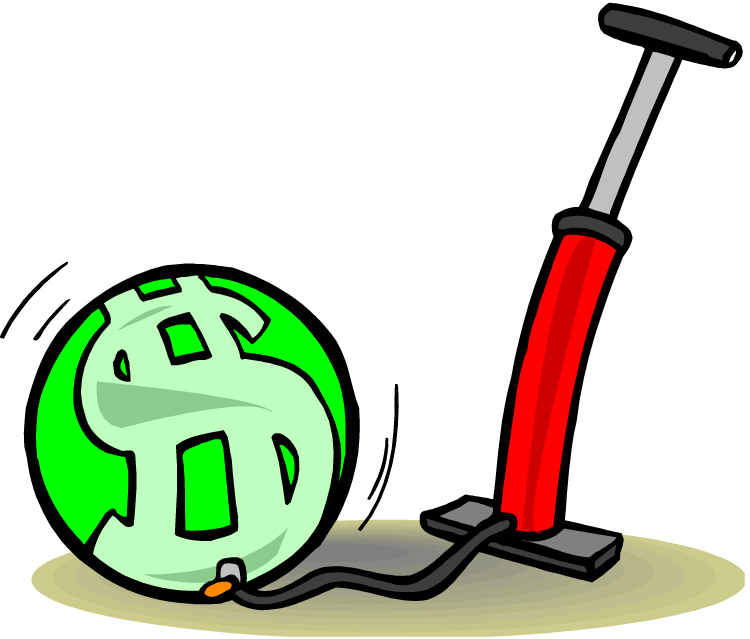 The upper image is courtesy of Lower Missouri River – Image Results. The image was accompanied by a 2012 article from the Sioux City Journal, about how the low water level – eight years ago – could hurt boating and tourism.

Re: Atlanta Beltway. See Interstate 285 (Georgia) – Wikipedia, re: the ” Interstate Highway loop encircling Atlanta, Georgia… Because of suburban sprawl, it is estimated that more than two million people use the highway each day, making it the busiest Interstate in the Atlanta metropolitan area, and one of the most heavily traveled roadways in the United States. During rush hour, portions of the highway slow, sometimes to a crawl.” That’s my hometown!

Re: “Incidentally, Clarksville…” Here’s what I first had in the main text, then moved to the notes:

Clarksville is where my aunt and uncle lived for a few years. And where we four brothers and various elders used to visit every summer. My “Uncle Willie” was serving with the 101st Airborne Division, based in nearby Fort Campbell, Kentucky. (Which itself might be worth a visit, but which may have to wait on the return trip…)

It was a fun place to visit, but I do remember one unpleasant event. One day when I was 11 or 12 I wandered down by the river. (I thought it was the Tennessee but turned out to be the Cumberland River, which I discovered via Google-mapping of the address. “I just Google-mapped it, and see that it’s right up from the Cumberland River, not the Tennessee River like I thought.”)

I came across a wandering group of young guys, about my age or a bit older. I’m not sure how it started, but I ended up getting “beat up” by one of the young toughs, no doubt trying to show off for his buddies. In hindsight it wasn’t that bad, just mostly just humiliating. Which led me to note in an email: “And that the undeveloped brushy area where I met those local ‘toughs’ is now all built up. With a Kelly’s Big Burger where the confrontation happened. I don’t think that US 41/Alt. Bypass was there either.” But we digress…

Re: “O be joyful.” See On the Chilkoot &^%$# Trail! – Part 2. It noted “O Be Joyful” was a code-word for “ardent spirits. We started packing them – in past canoe trips, like down the Missouri River … as a way of following in the footsteps of Lewis and Clark, and other American pioneers. You see, back in the old days of our country, whiskey – for example – was used instead of hard currency:”

One of the first media of exchange in the United States was classic whiskey. For men and women of the day, the alcohol did more than put “song in their hearts and laughter on their lips.” Whiskey was currency. Most forms of money were extremely scarce in our country after the Revolutionary War, making monetary innovation the key to success.

Re: Using a “stadium seat” on a canoe. The link is to stadium seat in a canoe – Advice – Paddling.com.

The lower image is courtesy of Stimulate Economy – Image Results.

And finally, for purposes of completeness I’ve included the following brotherly advice on this particular canoe trip, at this particular time of crisis in our national history:

One thing we need to take seriously is the possibility of COVID infection. One, or both, of us, coming down with disease half-way through the Missouri River trip would be a disaster. The canoe trip itself and the driving part, which is most of it time-wise, isn’t a problem. Hotels, restaurants, bars, and bathrooms; any place with close contact with people are a problem. I did some googling about safe travel and came up with the following:

Coffee/Bathroom breaks – avoid large, travel center type bathrooms with lots of people. Aim for small single-stall bathrooms like gas stations. Bring your own coffee cup so you’re not using those fingered by other travelers.

Restaurants – avoid restaurants, except possibly uncrowded outside dining areas, otherwise, bring our own food or get take-out meals. Avoid hotel buffet-style breakfast bars where who knows how many fingers have passed over the food, plates, etc. (get a McD’s take out instead).

Bars – NO BARs! Liquor and sound judgment do not mix. We bring our own libations to enjoy in the quietude of our room or on the banks of the Missouri.

Hotels – Avoid places where close contact with people is possible, like elevators (take the stairs). One website said to bring your own linen (sheets, towels, etc.), a bit overboard, I think. But bring your own pillow would be doable–so you’re not laying your head down on a pillow 50 billion other people have been drooling on for the last half-century.

Masks, wipes, gloves, hand sanitizer, hand washing – Bring these and use often. In hotel rooms, use wipes or sprays to sanitize doorknobs, faucet handles, TV remotes, flat surfaces around sinks, toilet handles, nightstands by beds where sick people are likely to put their snotty Kleenex. If you can’t find hand sanitizer there’s an easy receipt – mix 2/3 cup of 91% alcohol with 1/3 cup of aloe vera gel in a travel bottle. You can get this stuff in any pharmacy. And of course, the best is to wash with soap and water–often.

Again, I’m taking this very seriously, and I’m hoping you will too. We don’t want to be searching for ambulances and hospitals in rural IA/NE or bringing the plague home to share with loved ones.