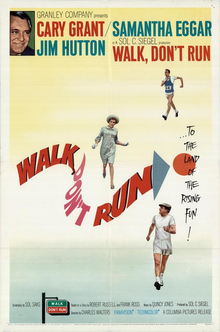 We know the song better as “My Country, ‘Tis of Thee.”  (The “lyrics of which were written by Samuel Francis Smith in 1831.”)

But in what was the old country – to most if not all Founding Fathers – the tune was called God Save the Queen.

(In a totally-unrelated side-note, Cary Grant and Jim Hutton sang the first verse – of My Country, ‘Tis of Thee – in the 1966 film “Walk, Don’t Run” – shown at left – “while simultaneously Grant and Samantha Eggar sang ‘God Save the Queen.'”)

There’s more about that incipient dichotomy further below, but first it should be noted that today is July 4th, and that’s better known as Independence Day.

Independence Day [commemorates] the adoption of the Declaration of Independence 241 years ago on July 4, 1776.  The Continental Congress declared that the thirteen American colonies regarded themselves as a new nation, the United States of America, and were no longer part of the British Empire.

To repeat that last part:  What had been 13 American colonies “were no longer part of the British Empire.”  Which is another way of saying that “things had changed,” and that change was exemplified by our singing My Country, ‘Tis of Thee, not God Save the Queen.

And now a word about Puck, the magazine…

The source of the cartoon at the top of the page – Puck – was the “first successful humor magazine in the United States of colorful cartoons, caricatures and political satire of the issues of the day.  It was published from 1871 until 1918.”

Did you get that last?  Political satire!

Not that that observation applies to current events or anything…

But before getting back on track, here’s a note for those who think emoticons were literally or figuratively “invented yesterday.”  (Or at least only in this century.)  The illustration at right is from the March 1881 edition of Puck magazine.

Which just goes to show that there’s nothing new under the sun.  But now:  Getting back on track…

Last July 5th, I posted On the Independent Voter.

The key point I made – last year at this time – was the growing refusal to compromise in politics, “and compromise is the keystone of a American democracy.”  That in turn has led to the growth of black and white thinking.  “Psychologists call that splitting, or ‘the failure in a person’s thinking to bring together the dichotomy of both positive and negative qualities of the self and others into a cohesive, realistic whole.'”

And that in turn has led to the growth of the “Independent voter,” and just in time…

That is, there seems to be a growing fallacy – among Conservatives – that they are the only real Americans.  See for example Conservatives Who Believe in ‘Trumpism:”

Which leads to this “something to think about.”  If the Founding Fathers had been Conservative, we wouldn’t be celebrating the Fourth of the July today, would we?

Re:  Nothing new under the sun.  See also Ecclesiastes 1:9.

The lower image is courtesy of God Save the Queen …vantagefx.com.  The link is to an article posted February 23, 2016:  “Brexit Odds and Oil Speculation.”