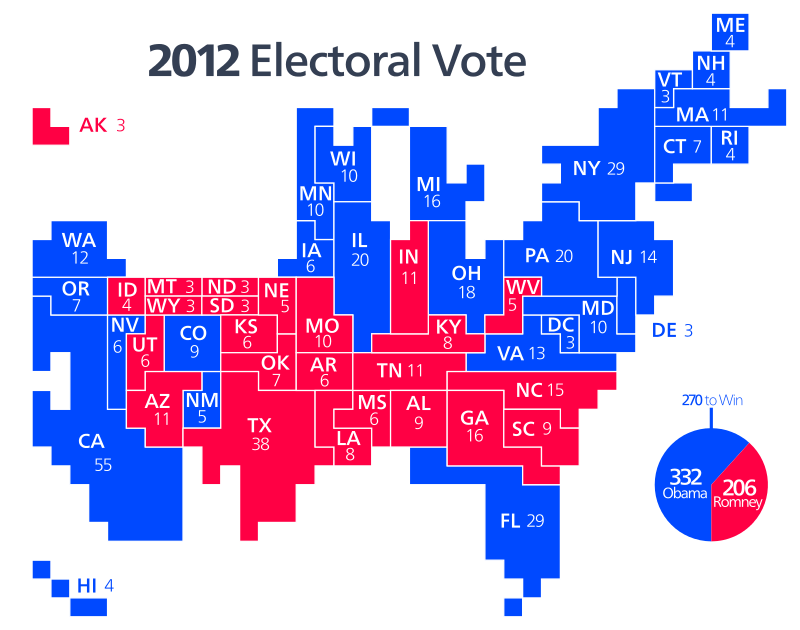 Here’s how the the U.S. looked in 2012, according to votes in the Electoral College…

Did you know that a candidate for president could get only 40% of the popular vote, yet get 59% of votes in the Electoral College?  (Thus “winning?”)  It’s happened before, as noted below.

Which brings up some confusion I felt a few mornings ago, after the first day of the Republican convention.  The confusion was about just who is leading in the polls, Hillary or Donald?

For an example, see Pick a poll:  Is the race tied, or is Clinton beating Trump?  As that article noted:  “It all depends on which national polls you believe.”  Which makes this as good a time as any to bring up the subject of the Electoral College:

Citizens of the United States do not directly elect the president or the vice president;  instead, these voters directly elect designated intermediaries called “electors” … who are themselves selected according to the particular laws of each state.

(See Wikipedia.)  Which is another way of saying the candidate who gets the most popular votes doesn’t necessarily become president.  (Think “President Al Gore.”)

Then there’s the fact that polls aren’t necessarily accurate.

For example, in 1948 “every major political poll predicted a landslide victory for Thomas Dewey.”  (For the history-challenged, Truman won.)  See also the article about such electoral colleges in general, which added:

In the 19th century and beyond, it was usual in many countries that voters did not directly vote the members of parliament.  In Prussia for example, in 1849–1918 the voters were Urwähler (original voters), appointing with their vote a Wahlmann (elector)…  Such indirect suffrage was a means to steer the voting, to make sure that the electors were “able” persons…  The left wing opposition was very much opposed to indirect suffrage.

Which could be another way of saying the powers that be – which for America includes some Founding Fathers, like at right – “didn’t trust the average voter.”  (And some would say – from recent trends – that they had a point.  See Founding Fathers, Trust Issues and the Popular Vote.)

But we digress…  So just in case I’m being too subtle, there are a couple points here.  One is that those “popularity polls” don’t necessarily mean very much.  The other is that what really counts is – are? – the votes in the Electoral College.

The problem is:  Determining the votes in the Electoral College can be a bit tricky.

On the other hand, the present situation in the Electoral College does seem to favor Hillary.  See for example Welcome to the general election: Where did Hillary’s cakewalk go?

Democrats looking for a cakewalk win over Trump in November may eventually get it.  The electoral college strongly favors Clinton.  And Trump is always a step away from a total meltdown.  But in an election in which Americans are disgusted with their choices, anything can happen and a Trump presidency is a real possibility.

For another take on the problem, see Don’t Worry About The Electoral College Math.  Among other things, that article noted that while the Electoral College effectively votes “state by state,” there are few if any purely state polls which can reliably show how a state’s electoral delegates will vote.

On the other hand, there’s 270toWin.com, with the trademark, “This isn’t a popularity contest.”

That site shows electoral votes by state.  (Which is – after all – what really matters.)  And that brings up the time in American history where one candidate for president got only 40% of the popular vote, yet won 59% of votes in the Electoral College.

That guy’s name was Abraham Lincoln, and in the presidential election of 1860, he won only 40% of the popular vote.  (The rest were split between John C. Breckinridge, John Bell and Stephen A. Douglas.)  However, Lincoln won 180 Electoral College votes, out of a possible 303.  (Thus his “magic number” was the152 electoral votes needed to win.)

The amazing thing in that election is that Lincoln lost the Solid South – updated at right – but won what might be called the “Solid North.”  (In 1860, those states generally above the Mason-Dixon line and/or the Ohio River.)

And a side note:  Back in 1860, Lincoln’s “for sure” votes in the Electoral College included New York, Pennsylvania and Ohio.  Those three states had 35, 27 and 23 electoral votes, respectively, for 85 of the total 152 needed for victory.  Which means that those three states alone accounted for almost 60% of the total Abraham Lincoln needed to become president in 1860.

For purposes of comparison – and as updated to the present time – New York state seems “solidly blue,” along with Pennsylvania.  Ohio seems to be one of those swing states, but one big difference – compared to 1860 – is California.  In 1860, California had only four votes in the Electoral College, but today that state has 55.  And it too seems “solidly blue.”

Which means that Hillary seems to start out with a solid 104 votes in the Electoral College.  (29, 20 and 55, respectively.)  Which – along with the beginning – is a “very good place to start.”

That in turn seems similar to the beginning of that other American Civil War.  (Where one side “looked much better on paper.  But many factors undetermined at the outbreak … could have tilted the balance sheet toward a different outcome.”)  But once again we digress…

I’ll be exploring the 2016 presidential election in future posts.  In the meantime, one final note:

This may be the last post I’ll publish for awhile, or the next five weeks.  Next Tuesday – July 26 – I’ll be heading north to Skagway, Alaska.  From there I’ll spend four days hiking the Chilkoot Trail.  (The “meanest 33 miles in history.”)  Once that’s done, my brother and I will spend 16 days canoeing down the Yukon River, from Whitehorse to Dawson City.

Assuming I survive all that, I should be back in business some time after August 29.

But stay tuned.  There may well be “further bulletins as events warrant!”

(See the cartoon below…)

The upper image is courtesy of Electoral College (U.S.) – Wikipedia, the free encyclopedia.  BTW: There is a movement afoot to pass a “National Popular Vote” bill.  That would “guarantee the Presidency to the candidate who receives the most popular votes in the entire U.S.”  See National Popular Vote.com

The “news flash” image is courtesy of www.dralionkennels.com/newsflash.

Re:  “Pick a poll.”  The article said – among other things – that “Trump’s negatives remain sky-high and higher than Clinton’s, and the GOP brand is horrible (and much worse that the Democratic brand).”  See also Myra Adams: How Does Trump Win 270 Electoral Votes?

If we do see Donald Trump push the white vote up into 63-64%, it suggests that as whites move towards minority status that they become more aware of their whiteness, and it plays into politics.  It is a disheartening and dangerous trend, but it might be something we don’t have any control over…  He has no other path to victory.

The “Dewey Defeats Truman” image is courtesy of the link 5 Historic Presidential Campaign Collapses, in the web article How the Electoral College Works | HowStuffWorks.  (“Dewey Defeats Himself.”)

The Founding Fathers image is courtesy of quotesgram.com.

Re: “Left wing opposition … opposed to indirect suffrage.”  They might be changing their minds now…

The actual expression of course is the “lesser of two evils.”  See Idioms …Free Dictionary.

Re:  “magic number.”  That term is also defined online as a “figure regarded as significant or momentous in a particular context.”

The comparison in Electoral College votes – between 1860 and 2016 – was gleaned from sources including 270toWin.com, and RealClearPolitics – Opinion, News, Analysis, Video and Polls.

Re:  The beginning of the Civil War, in which “one side ‘looked much better on paper,'” etc. See Strengths and Weaknesses: North vs. South [ushistory.org]

The lower image is courtesy of United States presidential election, 1860 – Wikipedia.  The caption: “Black and white portrait photograph (bust) of Abraham Lincoln taken immediately after Lincoln’s nomination.”  The article noted that voter turnout was 81.2%, “the highest in American history up to that time, and the second-highest overall (exceeded only in the election of 1876).”

For some recent historical perspective, voter turnout in the 2008 and 2012 presidential elections was 61.6% and 58.2%, respectively.

Other notes from the presidential election of 1860:  To be precise, Lincoln won only 39.8% of the popular vote.  His closest competitor – in terms of popular votes – was Stephen Douglas.  Douglas got 1,380,202 popular votes, or 29.5 percent of the total, compared to Lincoln’s 39.8%.  However, Douglas’ million-plus popular votes translated to only 12 votes in the Electoral College.

And speaking of voter turnout, see The Americans: The National Experience, by Daniel J. Boorstin. Boorstin indicated that political parties were originally designed – in part – to increase voter turnout, though the blessings of that change seem to be mixed.

Near the end of his book, Boorstin wrote about the “novel institution of a party ticket.” (429)  The idea – of voting along party lines – originally stirred opposition from political idealists.  For example, one editor in 1790 wrote, “We want no Ticket Mongers.”  (Emphasis in the original.)  And in 1800 a Connecticut Federalist “attacked the whole ‘detestable practice of electioneering.”

But the practice – which eventually led to our two political parties today – proved “too useful for office-seekers, and too entertaining to voters.” (E.A.)  Which brings up the matter of political conventions.  Boorstin wrote that in its original form – before today’s system of voting in primaries – political conventions “concentrated party strength” and increased the chances of victory.  Also in their original form, party conventions were held only at the state and county level.  It was not until 1832 that national conventions – like we have now – “were for the first time held by all the major parties that offered candidates for president.”  See page 430, which also included this thought:

And it seems that we may be seeing that Reconstruction “even as we speak.”  See Sick Of Political Parties, Unaffiliated Voters Are Changing Politics.

See also Five myths about independent voters – Washington Post.  Among the findings:  “Independents are more turned off than partisan voters by negative campaign ads;” “Most independents are socially liberal, fiscally responsible centrists, but some are also libertarians and far-left progressives;” and 60% of Independents “agree with the Republicans on some things, such as the economy and national security, and with the Democrats on social issues.” (The red-blue voting booth image is courtesy of the Sick Of Political Parties article.)