Christmas Day has come and gone.  But that doesn’t mean the Christmas season is over.  As noted last year here, the Twelve Days of Christmas are “both a festive Christmas season” and the title of a “host of songs and spin-offs (including one on a Mustang GT):”

The Twelve Days of Christmas [begin] on Christmas Day (25 December)[, they celebrate] the birth of Jesus [and are] also known as Christmastide…   The Feast of the Epiphany is on 6 January [and] celebrates the visit of the Wise Men (Magi) and their bringing of gifts to the child Jesus.  In some traditions, the feast of Epiphany and Twelfth Day overlap.

The post also said that technically this holiday season really started back on Halloween.

The thing is, winters back in the really old days – when life was nasty, brutish and short – were really long and really boring.  So folks back then looked for any good reason to throw a party and get sloshed.  (Which explains why the “party season” started on Halloween.)

So in one sense you could say the end of that extended holiday season comes on January 6.

Getting back to January 6, another name for it was Twelfth Night.  That in turn was the name of famous play by William Shakespeare.  The play “expanded on the musical interludes and riotous disorder expected of the occasion,” to wit: the “occasion of the ‘drunken revelry’ of 12th Night.”

And finally, January 6th has yet another name.  It is perhaps best known as the Epiphany.

But getting back to Plough Monday:  In England it marks the start of the new Agricultural Year.  The Church of England had a long church service to mark the occasion, with prayers for a bountiful harvest.  And that service included both a blessing of the seed to be planted and a “blessing of the plough” – as illustrated at right:

Blessed are you, Lord God of all creation:  for in your abundant care you have given us fertile land, rich soil, the seasons in their courses…  By your blessing, let this plough be a sign of all that you promise to us.  Prosper the work of our hands, and provide abundant crops for your people to share.

In turn, Plough Monday was preceded by Plough Sunday.  Plough Sunday was seen as a way of celebrating farming and the work of farmers, in church.  But since you weren’t supposed to work on Sundays – back in the good old days – the new agricultural year didn’t really start until the next work day:  “work in the fields did not begin until the day after Plough Sunday.”

Put another way:  Since Epiphany always came on January 6, Plough Sunday came on the Sunday after the Epiphany.  (The Sunday between January 7 and January 13.)  Thus Plough Monday is usually the first Monday after Twelfth Day (Epiphany), 6 January.

The point of all this – January 6, Plough Monday, etc. – was to have one more big blast before getting back to work.  (Resuming farm-work after the extended Christmas holiday season.)  As such it was one more occasion for general tomfoolery, as shown in the top picture:

In some areas, particularly in northern England and East England, a plough was hauled from house to house in a procession, collecting money.  They were often accompanied by musicians, an old woman or a boy dressed as an old woman, called the “Bessy,” and a man in the role of the “fool.”

In turn it may  help to remember that one big reason for all this general tomfoolery was that – otherwise – life back then was indeed “nasty, brutish and short.”

And finally, people usually celebrated Plough Monday by eating Plough Pudding, as seen at left:  A “boiled suet pudding, containing meat and onions.  It is from Norfolk and is eaten on Plough Monday.”

All of which brings up the topic of Ringing In The New Year.  That web article noted that bells – as in the ringing of bells – are “a deeply spiritual part of ushering in both life and death for ancient cultures.  (In a practice that serves as an “apt metaphor for the changing of the New Year.”

During the Middle Ages in western Europe … authorities moved New Year’s Day variously, depending upon locale, to one of several other days, among them: March 1, March 25, Easter, September 1, and December 25.  These New Year’s Day changes generally reverted to using January 1 [with] local adoptions of the Gregorian calendar, beginning in 1582…

Note also that the ancient Hebrews celebrated a type of New Year with Rosh Hashanah.  (Hebrew for “head of the year.”)  Rosh Hashanah is a two day holiday “commemorating the culmination of the seven days of Creation, and marking God’s yearly renewal of His world.”

As for January 1, that started in Rome:  “During the Roman Republic and the Roman Empire years began on the date on which each consul first entered office.”  But then in 45 BC – and the new “Julian calendar” – the Roman Senate fixed January 1 as the first day of the year.

At that time, this was the date on which those who were to hold civil office assumed their official position, and it was also the traditional annual date for the convening of the Roman Senate. This civil new year remained in effect throughout the Roman Empire, east and west, during its lifetime and well after, wherever the Julian calendar continued in use.

So here’s wishing you a happy, healthy and prosperous 2016 in advance! 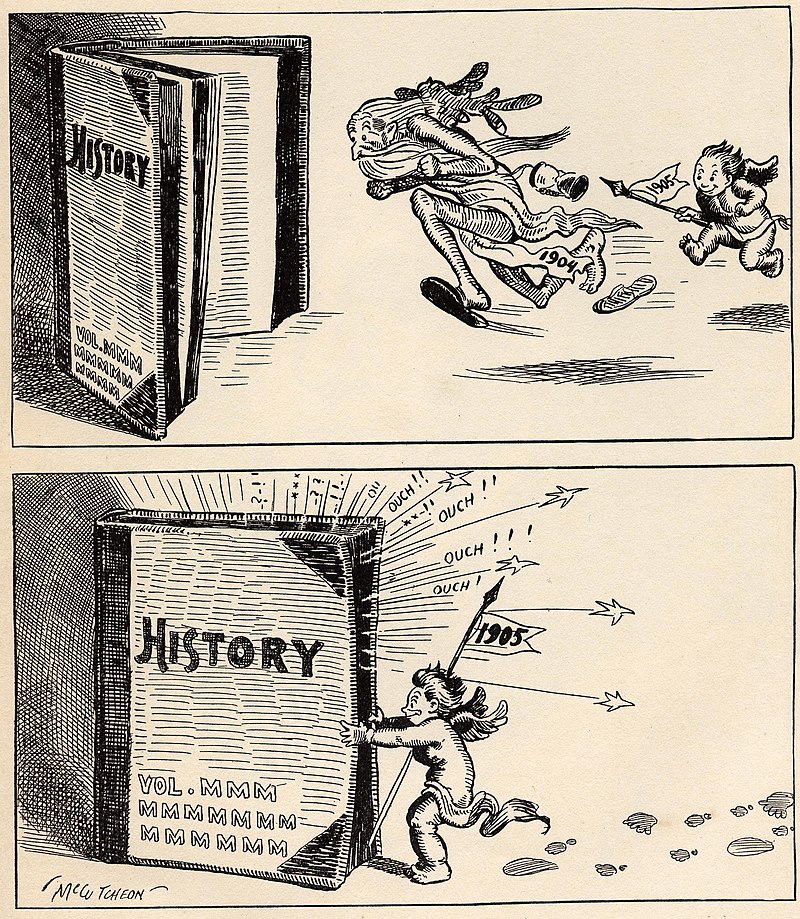 Note that this post was modeled on a similar one at DOR Scribe, my other blog.

The lower image is courtesy of New Year – Wikipedia, the free encyclopedia.  The full caption:  “Baby New Year 1905 chases old 1904 into the history books in this cartoon by John T. McCutcheon.”  See also ‘Ringing’ Or ‘Bringing In The New Year:’ A History.