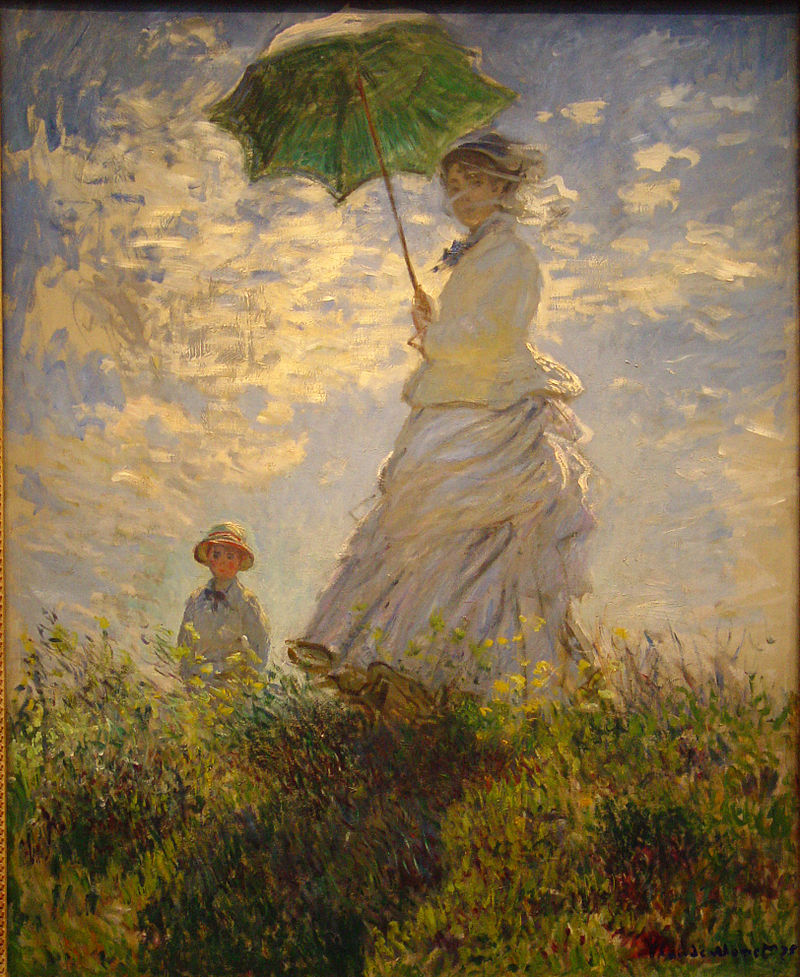 I’m more likely to see a “Lady with a Parasol,” strolling the banks of the Rideau Canal…

As noted in Paddling the Rideau Canal:  This August my Utah-brother and I will be canoeing – some six to 10 days – up the Rideau Canal, from Kingston to Ottawa, Ontario.

Which brings up the fact that two years ago this August, we spent two weeks canoeing the Mighty Yukon River. (Also in Canada.)  We paddled 440 miles – from Whitehorse  to Dawson City – in 12 days.  (Not counting the one day  we took off from paddling – Sunday, August 14 – in beautiful Carmacks, Yukon Territory.  The idea was to rest, refit and enjoy an ice-cold Yukon Gold.)

One result of that trip was a post on August 28, 2016, “Naked lady on the Yukon.”  As noted in the post, the Yukon River was “the last place on earth I would expect to see a lady sun bathing.”  (In the altogether, as it were.)  But I could probably say the same thing about the Rideau Canal.

You can read the full story in the Naked lady post, but here’s a short version:

It was Friday, August 12.  We were a day away from Carmacks, and had been on the river five days already…  About 4:00 my brother was way ahead of me, when he went around a right-hand bend and looked like he was heading to shore, for a break.  There followed one lo-o-o-o-o-o-o-ng right-hand curve in the Yukon, that seemed to last forever.  It was getting late and we were looking for the “good camp” listed in the guidebook.  When I finally got to the end of the long right-hand curve, I could see something, way off, a half-mile or so ahead.

That “something way off” turned out to be one of two canoeists (one canoe), who’d passed us at the north end of Lake Laberge.  (The other person “in the shadows” was her husband, methinks).  So anyway, the point is:  There – where we’d wanted to camp – lay a lovely young lady, face down aside her “grounded” canoe – in her birthday suit – “for all the world to see.”

Which brings up the strong current in the Yukon River.  It ranges from four to seven miles an hour, which is one reason you can cover 440 miles in 12 paddling days.  That averages out to over 36 miles a day, which is usually good.  However, when there’s something you don’t expect but would like to linger over, that presents a problem:  “By the time I recognized the naked lady as a naked lady, the current was already pushing me farther down-river.” 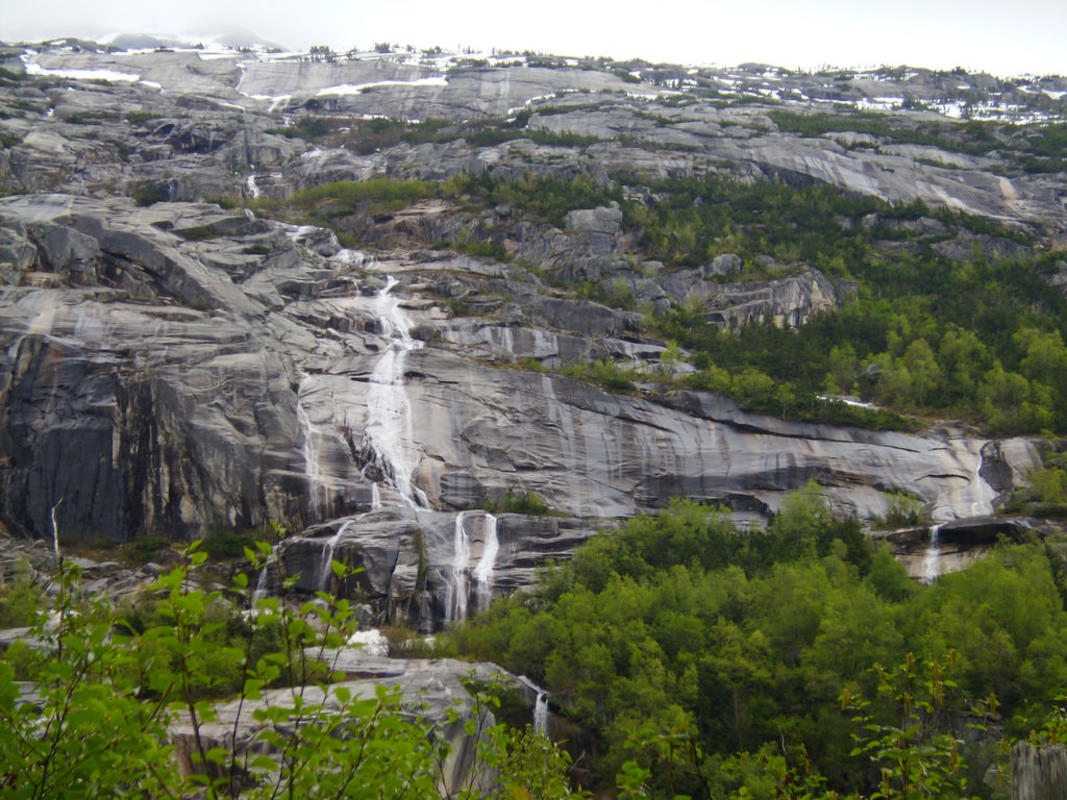 Again, you can read a fuller version of this tantalizing tale in “Naked lady on the Yukon.”  That’s along with references to a hike we did on that same trip, four days on the Chilkoot Trail.  (The “meanest 33 miles in history,” as seen at right.)  But for now, let’s get back to the upcoming Rideau trip…

For starters, only 12 of the 125 miles are actual “canal.”  The rest are woodland rivers and lakes, including Big Rideau Lake, 20 miles long and over three miles wide.  But this water route has one thing the Yukon River didn’t:  Plenty of places to stop for the night and shower, along with a goodly number of bed and breakfasts along the way.

So here let me try a bit of prognostication – or guesswork – for the first two days of canoeing.

Our plan is to average 15 miles a day, and thus cover the 125 miles in eight days.  (That’s not counting the total 677 miles of shoreline along the way, full of nooks and crannies we may choose to explore.)  And according to Google Maps, it’s roughly 17 miles from the Doug Fluhrer Park in Kingston, to the Rideau Rendezvous Bed and Breakfast, also listed as Kingston.  Or it’s a mere 14.5 miles if we start out at the Belle Island (Cataraqui Park) location.

Then – if we make the Rendezvous that first day – the next “pleasurable” stop up could be Chaffeys Lock (37).  That was the location of Chaffey’s Rapids, “333 yards (304 m) in length, descending about 13 feet … where Indian Lake flowed into Opinicon Lake.”

And as such it used to mean a 1,500-yard portage, which would have required unloading both our canoes, carrying them and all our baggage those 1,500 yards, then packing up and setting out again.

Of course if you really want to you can still do that.  However, we’ll pay the small fee…

But once again there are some comfy lodgings there too.  (For a full list see Rideau Campgrounds, Cottages & Lodges – rideau-info.com.)  And according to the Rideau Canal map in Wikipedia, it’s 28 miles from the starting point in Kingston to Chaffey’s Lock.  Which should be a do-able enough starting-out pace for two old guys, aged 67 and 72.  Now, whether we see a young lady sunbathing In the altogether those first two days is another question entirely… 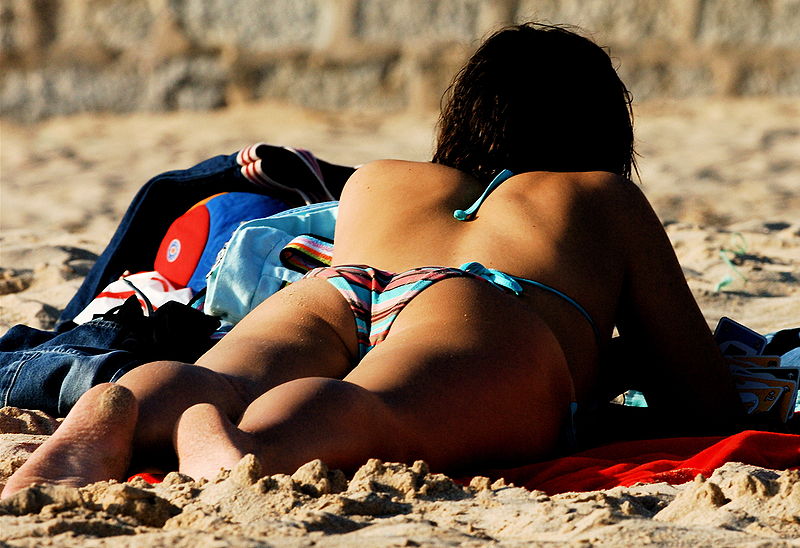 The upper image is courtesy of the Wikipedia article on sun bathing.  The full caption:  “‘La promenade’ (1875) by Claude Monet.  At that time in the West, the upper social class used parasols, long sleeves and hats to avoid sun tanning effects.”  (More’s the pity.)  See also Woman with a Parasol – Madame Monet and Her Son – Wikipedia.

The lower image is courtesy of Sun tanning – Wikipedia.  The caption:  “A woman sun tanning on a Portuguese beach.”