Oscar Wilde in 1882, before he was sentenced to two years prison for “gross indecency…”

As a general rule it pays to remember our past history.  That’s good advice even when – and maybe especially when – that history isn’t all that glorious.  As Harry Truman once said, “The only thing new in the world is the history you don’t know.”  (See Harry Truman and his History Lessons.)  Which brings up Roy Moore – and Oscar Wilde.

One interesting aspect of Moore’s saga involves his weighing legal action against women accusing him of harassment.  (Other interesting aspects include his being “compared to Jesus.”  Or – in the alternative – to Joseph, who “courted” Mary when she was 14 years old.)

But let’s focus on his weighing legal action against his accusers.  And the fact that “Those who cannot remember the past are [often] condemned to repeat it.”

In 1895, Oscar Wilde was at the height of his fame.*  But that all came crashing down when he got into a dispute with the Marquess of Queensberry.  (The same guy who lent his “name to the ‘Queensberry Rules‘ that form the basis of modern boxing.”)  It started like this:

On 18 February 1895, the Marquess left his calling card at Wilde’s club, the Albemarle, inscribed: “For Oscar Wilde, posing somdomite” [sic].  Wilde … against the advice of his friends, initiated a private prosecution against Queensberry for libel, since the note amounted to a public accusation that Wilde had committed the crime of sodomy.

What happened next was a public scandal, and a media circus.

It seems the Marquess of Queensberry was the father of Wilde’s lover – one of them anyway – Lord Alfred Douglas.  And after Wilde filed the lawsuit, the Marquess was arrested and charged with criminal libel.  So he and his lawyers went to work:

As noted, Wilde filed the lawsuit against the advice of friends, one of whom advised him to “flee to France.”  But he proceeded on, to a trial that “became a cause célèbre as salacious details” began to emerge in the press.  The trial itself began “amid scenes of near hysteria.” 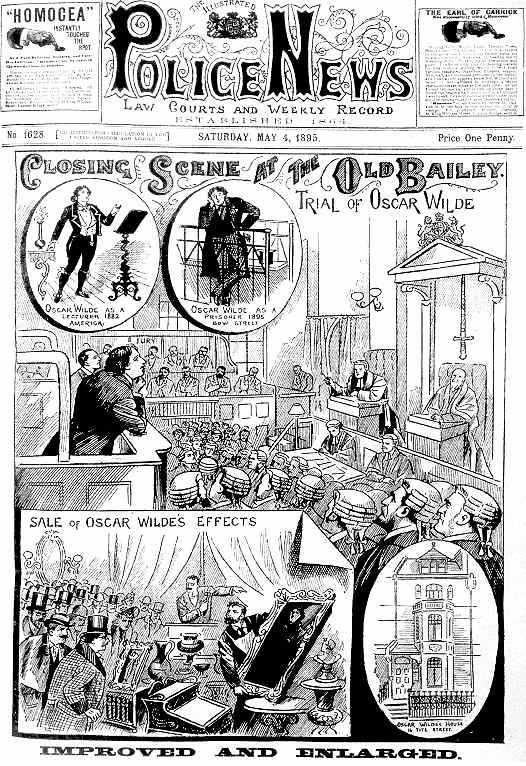 Later, as the defense produced evidence to support the accusations, Wilde decided to drop the prosecution:

Queensberry was found not guilty, as the court declared that his accusation that Wilde was “posing as a Somdomite” [sic] was justified, “true in substance and in fact.”  Under the Libel Act 1843, Queensberry’s acquittal rendered Wilde legally liable for the considerable expenses Queensberry had incurred in his defence, which left Wilde bankrupt.

But wait, there was more!!!

Even as Wilde was leaving court, an arrest warrant was applied for, against him.  Again friends advised him to take a fast boat to France, but it was too late.  Or as Wikipedia put it:  The libel trial unearthed evidence that led to Wilde’s “own arrest and trial for gross indecency.”

To make a long story short, Wilde was sentenced to two years hard labor.  And when he tried to speak, his voice was drowned out by cries of “‘Shame’ in the courtroom.”

Wilde was imprisoned first in Pentonville Prison and then Wandsworth Prison in London.  Inmates followed a regimen of “hard labour, hard fare and a hard bed,” which wore very harshly on Wilde…   His health declined sharply, and in November he collapsed during chapel from illness and hunger…    He spent two months in the infirmary…   Richard B. Haldane, the Liberal MP and reformer, visited him and had him transferred in November to Reading Prison…  The transfer itself was the lowest point of his incarceration, as a crowd jeered and spat at him on the railway platform.

When Wilde was released from prison – in May 1897 – he sailed immediately to France and never returned to England.  He spent his last three years “in impoverished exile.”  Despite that, and though his “health had suffered greatly from the harshness and diet of prison, he had a feeling of spiritual renewal.”  Among other works, in exile he wrote and partially published De Profundis, a letter “from the depths” based on Psalm 130.  (Of which more in the Notes.)

So maybe there’s some hope for Roy Moore yet…

The point is that in a few short years Oscar Wilde went from the highest acclaim to cries of “shame” in the courtroom.  And it all came about based on an ill-advised lawsuit that should never have been filed.  (And of which Roy Moore may want to take notice.)  Further, when Wilde was transferred to “Reading Gaol,” a crowd gathered to jeer and spit at him.

And now he brings tourists to Dublin, the city of his birth…

(Which leads to the question:  Will the same happen to Gadsden, Alabama, Roy Moore’s birthplace?) The upper image is courtesy of Oscar Wilde – Wikipedia, with the caption:  “Photograph taken in 1882 by Napoleon Sarony.”

“Note” also that an asterisk in the main text indicates a statement supported by a reference detailed further in this “notes” section.  Thus, as to Wilde “at the height of his fame:”  Throughout the 1880’s Wilde was a popular London playwright.  He was noted for his epigrams – his “witty, ingenious or pointed sayings” – and a novel The Picture of Dorian Gray.  Then there were the plays, including a “masterpiece,” The Importance of Being Earnest.  Also:

He wrote Salome (1891) in French in Paris but it was refused a licence for England due to the absolute prohibition of Biblical subjects on the English stage.  Unperturbed, Wilde produced four society comedies in the early 1890s, which made him one of the most successful playwrights of late Victorian London…

The “media circus” image is courtesy of Media Circusdavejay.com.

The lower image is courtesy of Wikipedia: “Statue of Oscar Wilde in Merrion Square, Dublin.”

A final note:  This post borrowed extensively from a post in my other blog, On Oscar Wilde and Psalm 130.  The following is a summary of the highlights of that post:

Between January and March 1897, near the end of his prison term, Wilde wrote a letter.

In other words, [Wilde] “lost everything dear to him,” but didn’t blame external forces.  [Take note, Roy.]  The letter quoted Isaiah 53:3  He was despised and rejected by mankind, and [Wilde] came to see “Christ as a Romantic artist.”  In a word, instead of blaming other people, Wilde “rather absorb[ed] his hardships through the artistic process into a spiritual experience.”  See Oscar Wilde, De Profundis, and also Voices from Solitary: Oscar Wilde’s Cry from the Depths.

Incidentally, Wilde had to publish his last work, “Reading Gaol,” under an assumed name:

The finished poem was published by Leonard Smithers in 1898 under the name C.3.3., which stood for cell block C, landing 3, cell 3.  This ensured that Wilde’s name – by then notorious – did not appear on the poem’s front cover…   It was a commercial success, going through seven editions in less than two years…

So again, maybe there’s some hope for Roy Moore yet…