Last December I posted Alice’s Restaurant – Revisited.  It included the photo-montage above, but who’da thunk it?  Who would have thought that one of those men – (the guy at top center) – would be elected president, a year later, in 2016?  (And I’m sure Donald didn’t inhale either.)

So once again the question is:  “Can you say prescient?”

I do that to “help my team win.”  Just like Moses did, holding his arms up at the Battle of Rephidim.  (At right.)

That is, Moses held his arms up at the Battle of Rephidim to help his team win.  I do the same thing, in part by listening to Alice’s Restaurant every Thanksgiving.  (To help my team beat its hated arch-rival, just like Moses helped his team beat “the dreaded Amalekites.”  For more see On football, Moses and Rephidim.)

But this year is different.  My team is out of the hunt for a national championship, so the outcome of tonight’s game isn’t going to change much.  (At most it’ll be the difference between going 9-3 in the regular season, or “falling” to 8-4.)  So whatever happens tonight, “we” will still have to wait until next year to win “our” fourth national championship.

This year is different because there are bigger events going on in the world outside sports.

The biggest difference?  This country has now embarked on what we might call “the Donald Experiment.”  Which means the question to be decided over the next four years is whether Donald Trump can deliver on the veritable plethora of promises that he made in his recent campaigns.  (First for the Republican nomination, then for the presidency itself.)

Or whether those promises are merely “negotiable campaign devices.*”

The term “massacree,” used by Guthrie[,] is a colloquialism originating in the Ozark Mountains that describes “an event so wildly and improbably and baroquely messed up that the results are almost impossible to believe.”  It is a corruption of the word massacre … but carries a much lighter and more sarcastic connotation, never being used to describe anything involving actual death.

In turn that phrase – “so wildly and improbably and baroquely messed up that the results are almost impossible to believe“ – perfectly describes the election we just went through. 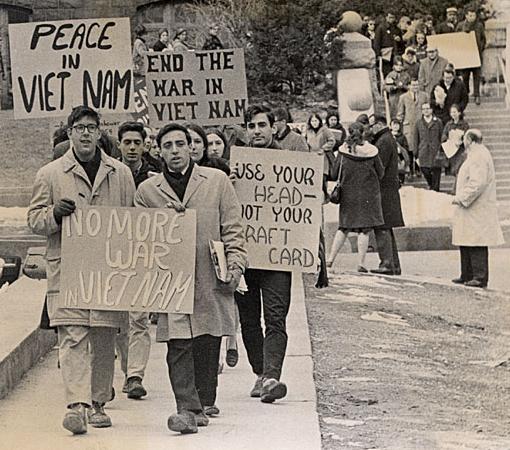 But getting back to the song itself:  “Alice’s Restaurant” described the Kafkaesque way that Guthrie managed to avoid the Draft – illustrated at right – in 1965.  Briefly, he was rejected because he’d been convicted of littering on Thanksgiving Day.  There followed his encounter with the “surreal bureaucracy at the New York City induction center at 39 Whitehall Street:”

[A]sked whether he had ever been convicted of a crime, Guthrie mentioned the littering incident, and learned that incident was bureaucratically indistinguishable from a violent felony…  In Guthrie’s words, they wanted “to know if I’m moral enough to join the Army – burn women, kids, houses and villages – after bein’ a litterbug.”  (E.A.)

Or as I noted in Alice’s Restaurant, in that song “Arlo Guthrie turned a patently absurd situation into a timeless classic.”  Which brings us back to the challenges raised by a Trump presidency.

To many this last election presents many Americans with a “patently absurd situation.”  But it could also present both a challenge and an opportunity.

Or in the immortal words of Joe Biden (at left):

“Calling it an opportunity is a little like saying:  ‘I’ve been dropped in the water that is shark-infested.  But you know, it’s an opportunity.  If I make it to shore, I will set a world’s record.  No one has ever done this before.”*

So if – on the morning after the last election – you started to feel like the next four years will be something like swimming in shark-infested waters, remember this:  It’s an opportunity!

But we digress…  We were talking about the Alice’s Restaurant Massacree and other such blasts from the past.  Which brings up another point that I made in Alice … Revisited:

Alice’s Restaurant reminds us that – for many folks – those good old days weren’t so good[, as seen in the] image at right: “segregated seating at the Super Bowl in 1955.”

And here’s that image, of “segregated seating …1955.”  You can see the full image at Alice’s Restaurant – Revisited, but the point I’m wondering about is whether we’ve made any progress at all.

Or – to put it another way – there always seems to be a significant segment of Americans who keep wanting to drag us back into the past.  And that’s true even though for many people, “those good old days weren’t so good.”

So it seems to me the slogan “Make America Great Again” carries an implied proviso:  “That is, ‘great’ for the people who did have it made back in the good old days.”

But just for kicks, how about this slogan instead:  Make America Better!

“Give me your tired, your poor, Your huddled masses yearning to breathe free…  Send these, the homeless, tempest-tost to me, I lift my lamp beside the golden door!”

And that brings us back to the election we just went through.  In some ways the outcome of that election is perfectly illustrated by this, The House GOP just took the whitest selfie ever:

Which brings up this observation:

“Sometimes you don’t know whether to laugh or cry…”

The upper image – which I borrowed from Alice … Revisited – is courtesy of courtesy of Liberal group claims Mitt Romney, Dick Cheney, Donald Trump, others are draft dodgers.  “Note” also that an asterisk in the main text indicates a statement supported by a reference detailed in these “notes.” Thus, as to Trump’s promises being negotiable or campaign devices, see Before taking office, Trump signals campaign promises are negotiable, All the Campaign Promises Donald Trump Has Broken in the Last 24 Hours, and/or Trump backs away from some of his strident campaign promises.

The “Draft” image is courtesy of Draft evasion – Wikipedia, the free encyclopedia.  The caption, “U.S. anti-Vietnam War protesters at the University of Wisconsin–Madison.  A placard to the right reads ‘Use your head – not your draft card.’”

Re: The image “segregated seating at the Super Bowl in 1955.”  In Alice’s Restaurant – Revisited I noted an anachronism, a “chronological inconsistency.”  That is, “the first Super Bowl was not played until 1967 – not 1955.  (The Green Bay Packers beat the Kansas City Chiefs 35-10.)”  The image in question – and the “Super Bowl 1955” caption with it – came from ivman’s blague.  The “blague” or “blogue” – apparently French for “blog” – is about “one French professor’s humorous and serious perspectives on life.”  (And specifically, his post on the “Good Old Days of Yesteryear.”)  Accordingly, even though the “Super Bowl 1955” caption was written by a cheese-eating surrender monkey – who got the timing of that ostensible Super Bowl wrong by a full decade – the photo is real enough…

A final note:   I borrowed the quote beneath the lower photo – “Sometimes you don’t know whether to laugh or cry” – from On rectal thermometers and “you’re entitle.”  That referred to an essay by Harry Golden, involving “our sense of American ingenuity,” the law of unintended consequences, and a concept he called “gradual integration,” referring once again to those “good old days:”

In the emergency room of the Alachua General Hospital at Gainesville, Florida [in 1962], there are three thermometers.  They stand in a row on a small shelf with nothing else.  The first is in an open container labeled:  “WHITE – ORAL,” the third is in an identical container labeled, “COLORED – ORAL,” and the middle one, which protrudes through a cork, in its otherwise sameness, is labeled “RECTAL.”  This is what I call gradual integration.