“Are you telling me Donald Trump just got elected president?”

Saturday, November 12 – In the news this morning: Trump tells ’60 Minutes’ he will try to keep the ‘strongest assets’ of Obamacare. Professor Allan Lichtman predicted last September that Trump would win.  But now he’s saying he’ll be impeached, but not by Democrats.*  The Republicans – he says – would rather have Mike Pence, as “far easier to control.”

They don’t want Trump as president, because they can’t control him. He’s unpredictable. They’d love to have Pence – an absolutely down-the-line, conservative, controllable Republican…  “Having Mike Pence in the White House would put a more trusted establishment Republican in the job.”

But the good news could be that it will take 67 Senate votes to actually convict and remove “the Donald” through impeachment. Which may explain why he’s being so “nicey-nice” with Democrats now.  (That’s where the “irony” comes in.) That is, if Donald plays his cards right, the Democrats might be the ones to insure that he doesn’t get impeached and convicted.  (It’s a two-step process, you see…)

Which brings up what I said back in March.  (About Trump being impeached if he got elected…)

In That OTHER “Teflon Don,” I compared Donald Trump with that “other Great American Showman, P. T. Barnum.”  (Barnum was often referred to as the “Prince of Humbugs,” as shown at right.)

Also in that post I noted that Barnum (1810-1891) was known for supposedly saying, “There’s a sucker born every minute.”

Which may be something a lot of people would credit Donald Trump as saying.  But in writing that post I learned something surprising.

Barnum – who we might today call “The P.T.” – also went into politics later in life.  And – surprise of surprises – he turned out to be quite an effective public servant:

Barnum served two terms in the Connecticut legislature in 1865 as a Republican.  [On the issue of slavery] and African-American suffrage, Barnum spoke before the legislature and said, “A human soul, ‘that God has created and Christ died for,’ is not to be trifled with. It may tenant the body of a Chinaman, a Turk, an Arab or a Hottentot – it is still an immortal spirit.”

Which no doubt surprised a number of people.

From there he was elected Mayor of Bridgeport, CT in 1875.  He “worked to improve the water supply, bring gas lighting to streets, and enforce liquor and prostitution laws.  Barnum was instrumental in starting Bridgeport Hospital, founded in 1878, and was its first president.”

Which no doubt surprised even more people.  And that brings up What Tom Hanks meant when he said ‘Life is like a box of chocolates:’

When you open a box of chocolates, there is a variety of flavors available. Problem is, since they are covered in chocolate, you can’t really tell what any given piece of chocolate is going to taste like…  The real lesson: you take what life gives you and you learn to deal with it, because – as they say – that’s life.

Which means that whatever else happens, the outcome of this last election is not going make me grumpy.  (Like those right-wing wackos, whining and complaining these last eight years.)  I’ll continue on as a Contrarian.  (Which I define as a “moderate with a ‘tude.”)

But I’ll be a cheerful Contrarian.  And besides, we just might be in for some pleasant surprises…

As noted in “Teflon Don,” P.T Barnum surprised a lot of people when he evolved “from a man of common stereotypes of the 1840s to a leader for emancipation by the Civil War.”  And it may be that Donald Trump will “evolve” as well.  That is, he may well evolve into something neither his ardent supporters nor his rabid opponents expect.

On the other hand, it wouldn’t surprise me if Showman Donald Trump actually played “those far-right conservatives like a piano.”  (See That OTHER “Teflon Don.”)

Either way, it leads to a question:  In light of Donald Trump’s chameleon-like shifting political positions – especially since last Tuesday – will he eventually be seen as an “effective elected official,” or a funhouse showman?  Or as the Simon Legree his opponents believe he is?  (And which – by the way – his statements on the campaign trail led them to believe…  But again, that may have been part of his playing “those far-right conservatives like a fiddle.” ) 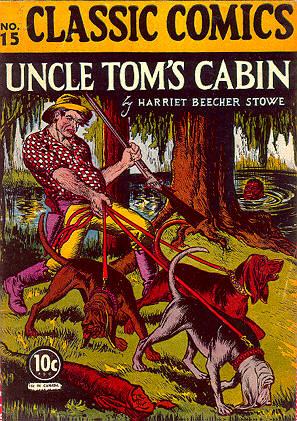 “Note” also that an asterisk in the main text indicates a statement supported by a reference detailed further in this “notes” section.  Thus, as to the prediction of impeachment, see Trump will be impeached – washingtonpost.com.  The “Having Mike Pence in the White House” part of the indented quote is courtesy of Professor Predicts Congress Will Impeach Trump.  And BTW:  “Trump now says ‘Crooked Hillary’ is ‘very strong and very smart.'” See ‘Crooked Hillary’ no more: Trump, etc.

Re: To play someone like a piano.  The cited reference is actually to playing someone like a fiddle – Wiktionary, meaning to ” manipulate (a person) skillfully.”

The lower image is courtesy of Uncle Tom’s Cabin – Wikipedia.  The full caption:  “Simon Legree on the cover of the comic book adaptation of ‘Uncle Tom’s Cabin’ (Classic Comics No. 15, November 1943 issue).”  The article added:  “It is unclear if Legree is based on any actual individuals.  Reports surfaced after the 1870s that Stowe had in mind a wealthy cotton and sugar plantation owner named Meredith Calhoun, who settled on the Red River north of Alexandria, Louisiana.  Generally, however, the personal characteristics of Calhoun (“highly educated and refined”) do not match the uncouthness and brutality of Legree.”  But that could change, I suppose…