The “Team of Five:” A president, president-elect, and three former presidents, on January 7, 2009…

Back in December 2014, down in my native Florida, I was at my step-mother’s funeral. (She’d married my father in January 1986. It was the Second Time Around for both her and my father, widow and widower.) After the funeral they had a nice reception – in the parish hall – and that’s where I found a big table of second-hand books for sale.

Looking through them, I found one that looked like an interesting read, The Presidents Club:  Inside the World’s Most Exclusive Fraternity. And as noted (“meaning to do since December, 2014”), I’ve been meaning to do this particular book review ever since I started this blog, back in March 2015. And since it’s now only a day of so away from March 2016, I’d say it’s about time I actually did that review. (A thought I also noted in the June 2015 post,  “Great politicians sell hope.”)

The “Great politicians” post reviewed another book, or more precisely a book-on-CD. That audiobook was Chris Matthew’s Life’s a Campaign. (It was sub-titled, “What Politics Has Taught Me about Friendship, Rivalry, Reputation, and Success.”) That experience led me to one big lesson for navigating today’s busy world. The lesson: It’s a whole lot easier to listen to a book – on CD, as while driving around town – than to actually read it.

But the really strange thing about both books is that they gave me a sense of hope:

(See Great politicians.)  In other words, both books gave me the budding idea that maybe it’s not the politicians at fault in these days of partisan gridlock.  Maybe – just maybe – it’s some of the people these politicians are trying to represent.  (To hire them, as it were.)

It reminds of that great Shakespeare quote, “The first thing we do, let’s kill all the lawyers.” 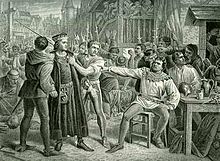 That’s from Shakespeare‘s Henry VI, Part 2.  (Illustrated at right.)  But aside from the fact it was spoken by “Dick the Butcher” – and that Shakespeare meant to honor good lawyers – the quote focuses on the wrong villain.

As a former lawyer myself, my reaction goes something like this:  “No, no.  The first thing we do is kill all the clients. They’re the ones causing the trouble!”

The thing is, lawyers only represent people, their clients.  So the chances are, if a lawyer does something sleazy, he probably did it with either the client’s permission, or the client’s direct command.  The result is that people hate “all lawyers” – lawyers in general – for doing such things.  But that’s only when somebody else’s lawyer is doing the sleaze-work.

And that’s probably just as true of politicians.  Most Americans today hate politicians in general, but not if it’s their politician, their Senator or Representative.  But maybe the unpleasant fact is that it’s way too many of “We the People” who’ve turned nasty and negative.

And that maybe today’s politicians are just reflections of such generalized nastiness in today’s politics.  But we’re digressing… We were discussing how “great politicians sell hope.”  And how rare that seems these days.  But that generally speaking, the men in the White House have been – overall – decent, honorable and capable.

A cynic might dismiss the 2005 buddy-movie disaster-relief efforts of [Bill] Clinton and the elder [George H. W.] Bush after a devastating Indian Ocean tsunami as cost-free do-goodism. But it’s hard not to put credence in the pull of the Presidents Club when you read that in a Bush family photo taken last year, the two Georges — and their extended kin — were joined incongruously by none other than the Democrat who served eight years between them.

See also Barbara Bush gushes about Bill Clinton, and “He’s my brother from another mother:” George W Bush.  (From which the bottom image was “courteously” borrowed.)

That brings up a big problem with The Presidents Club. It’s just too chock full of fascinating tidbits to be covered in one review. Things like Bill Clinton getting lessons in saluting from former president Ronald Reagan. Back near the end of November, 1992, just after Clinton’s election, he was in Los Angeles. His staff arranged a visit to Reagan’s post-presidential office:

Clinton, Reagan insisted, needed to learn how to salute…  As commander-in-chief, Reagan suggested, Clinton would need a good, crisp, up-and-down slash of the hand to get the job done right…  It helped that Reagan knew how to salute, both as a former Army cavalry officer and a former actor who played one in the movies.

Clinton on the other hand had never served in uniform.  The trick – Reagan said – was “pacing.” Real soldiers brought their saluting hand up slowly, “as if dripping with honey.”  But they brought the hand down “briskly, as if it were covered with something less pleasant:”

And so the eighty-one-year-old Reagan proceeded to give the forty-six-year-old Clinton a private tutorial.  The two men stood there in Reagan’s L.A. office, thirty-four floors above Beverly Hills, perfecting their salutes.

(414-15)  But that’s only the tip of the iceberg.  Which means that I’ll be doing lots more posts on Presidents Club in the future, as circumstances warrant. But in closing, let’s take a look back at Ronald Reagan. (And the “professionalism” that would likely doom his chances of winning a Republican nomination today.)

Ethan Bronner noted that even though they were political adversaries, Ted Kennedy admired the fact that Reagan, an ardent conservative, “could sup with his enemies.”  Kennedy added:

(104)  The part about “supping with your enemies” is something today’s politicians might keep in mind.  We could use a bit more professionalism in today’s politics… See also Amazon.com: The Presidents Club: Inside the World’s Most Exclusive Fraternity. And a note: The “Team of Five” part of the caption is an anachronism, a chronological misplacing. “Team of Five” is the name of a book published in 2020, four years after the original post. That’s because I went back in January 2022 and edited the original post, in part because two of the images I’d put in were now empty squares. And the full title and link to the book is Amazon.com: Team of Five: The Presidents Club in the Age of Trump.

Re: Chris Matthews.  See also Chris Matthews Discusses ‘Life’s a Campaign’ : NPR, and Amazon.com: Customer Reviews: Life’s a campaign: What politics has taught me about friendship, rivalry, reputation and success.

Re: “Kill all the lawyers.”  See ‘Kill the Lawyers,’ A Line Misinterpreted – NYTimes.com:

Shakespeare’s exact line ”The first thing we do, let’s kill all the lawyers,” was stated by Dick the Butcher in ”Henry VI,” Part II, act IV, Scene II, Line 73. Dick the Butcher was a follower of the rebel Jack Cade, who thought that if he disturbed law and order, he could become king. Shakespeare meant it as a compliment to attorneys and judges who instill justice in society.

For another take on lawyers in general, see also Lawyers – Wikiquote.  (Another strange thing:  Just type in “kill all” in your search engine, and it automatically fills in “the lawyers.”)

For an image to go with the “Henry VI, Part 2” paragraph, see the “Jack Cade – rebel leader” link in that article. The caption: “Lord Saye and Sele brought before Jack Cade 4th July 1450, painting by Charles Lucy.”  The article noted that despite Cade’s “frequent promises that his followers would maintain a proper and orderly demeanour,” the rebellion disintegrated into “looting and drunken behaviour.  Gradually Cade’s inability to control his followers alienated the initially sympathetic citizens of London, who eventually turned against the rebels.”  See also James Fiennes, 1st Baron Saye and Sele, referring to one person, the baron who was “beheaded by a mob of the rebels in London under Jack Cade at the Standard in Cheapside on 4 July 1450.”

The Presidents Club, established at Dwight Eisenhower’s inauguration by Harry Truman and Herbert Hoover, is a complicated place…  Among their secrets:  How Jack Kennedy tried to blame Ike for the Bay of Pigs.  How Ike quietly helped Reagan win his first race in 1966.  How Richard Nixon conspired with Lyndon Johnson to get elected and then betrayed him.  [And how] Jerry Ford and Jimmy Carter turned a deep enmity into an alliance….

Re:  Ted Kennedy on Ronald Reagan.  See Battle for Justice: How the [Robert] Bork Nomination Shook America, by Bronner, Anchor Book edition (1989), at page 104.  The complete quote is that Reagan knew “how to manipulate symbols for his causes yet could sup with his enemies.”  That page added a telling example of Kennedy “rolling with the political punches.”

The Bork nomination to the U.S. Supreme Court was “on its knees” but he decided to fight on anyway.  He was cheered on by Senator Phil Gramm of Texas, who said, “We know what the cheaters think about this.  Let’s see what the A students think.”  (Referring to Ted Kennedy’s “famed cheating episode on a college examination” and reports that Joseph Biden “once plagiarized in law school.”):

The lower image is courtesy of “He’s my brother from another mother:” George W Bush.  See also nymag.com/daily/intelligencer/2013/12/obama-is-not-george-w-bush. , which noted – among other things – that “W” had a “friendly” Congress for six of his eight years in office, while Obama has never had such cooperation.  Thus this conclusion:

By the end of 2005, George W. Bush had seen the promise of his presidency collapse from justifiably lofty heights.  At the end of 2013, Obama stands at just about the same place he began his term.