This post tries to answer the musical question  –  “Is there a new Maverick in town?

This post follows up the last one, “Is there a new ‘Maverick’ in town?”

The inspiration for both these blog-posts came when I found an old – November 1998 – copy of Rolling Stone magazine.  (At the bottom of a dumpster.)  The cover showed Bill Clinton – looking “befuddled” – in the middle of the Monica Lewinsky scandal.  (She’s at left.)

But inside – starting on page 92 – I found an article “much more relevant to today’s political scene.”  It noted a candidate – 18 years ago – who showed a “malignant understanding of how angry words, more than real ideas, can be deployed as weapons of power:”

He knows that repetition – invoking the same foul claims over and over – can transform outrageous lies into popular understandings.  He blithely changes his facts, positions and personae because he is making it up as he goes along and assumes no one will catch up with the contradictions…

But here’s the strange part:  It wasn’t Donald Trump!

Page 97 included this tidbit, about that 1998 presidential candidate:  “The man sounds delusional, and probably he is.  He sounded the same twenty years ago…”  (Which seems to verify that history repeats in cycles.)  Also on page 97:

The demagogic style of politics is still present in the man…  A lot of [his] harsh rhetoric has the quality.  It may sound loopy at first…  But if you assume [his] eye is really on the White House, reckless declarations may make sense for advancing his agenda.

Page 97 also featured a side note about an assistant – on the campaign staff – who quit “as the [candidate] got more and more detached from reality.”

So just who was this guy?

Who was this arguable precursor to Donald Trump?  (With his take no prisoners style of campaigning?)  You could see the answer in the smaller headline.  (Just above the lead “Stink at the Other End of Pennsylvania Avenue.”)  Just above that lead headline, in slightly smaller type, read these words:  “The Real Scandal in Washington is Newt Gingrich.”

Which brings up the subject of “The Newt’s” powers of prophecy.  In 1998, Gingrich meditated on one thing quite often.  (Aside from his own presidential run.)  That one thing?

How will America look – in 2017 – “after two consecutive two-term Republican presidents (possibly including himself) have transformed America.”

As to how Newt’s powers of prophecy turned out, try an experiment.

Type “newt” into your search engine.  One result that I got quick was: “newt gingrich scandal.”  That “other teaser” led to links like Newt Gingrich Lacks Moral Character.  (According to “second ex-wife Marianne.”)

Another link:  Newt Gingrich’s Congressional Ethics Scandal Explained.  (According to both Mother Jones magazine and – in 2011 – the “pro-[Mitt]-Romney super-PAC Restore Our Future,” which said “Newt has a ton of baggage.”)  A third link-title read, Newt Gingrich Affair – Huffington Post.  That third link led to a host of other links on this apparently-robust topic.

Then there’s the fact that we didn’t have “two consecutive two-term Republican presidents.”

Getting back to the Rolling Stone:  Page 124 noted that Newt – in 1998 – “will  become anything and ruin anybody else in order to achieve his goals.”  That page also featured a quote from one victim – a Democrat – who noted ruefully:  “Gingrich developed a vocabulary of poison, which he injected into the political dialogue.”  (All of which sounds eerily familiar…)

Then came page 125, with this note:  “Sure it’s difficult to imagine the nation electing someone disliked by two-thirds of the electorate.  But it’s easy to imagine Gingrich scoring well in Republican primaries, where right-wingers can crowd out moderates.”  And this:

Newt Gingrich poses a greater threat to the Republican Party than to the republic itself.  The GOP will not become the governing party as long as leaders like Gingrich hold the reins.  And more and more reasonable Republicans are beginning to realize this.

One response to that “reasonable Republicans” comment could be:  Apparently not!  All of which arguably leads to this prophetic cartoon, by Charles Schulz back in 1961:

One response to that 1961 prophecy could be:  “There seem to be plenty of openings in the lunatic fringe, and more and more of those openings are being filled these days!”

But once again we digress.  The topic at hand is whether Donald Trump’s appearance – as the darling of a large segment of the conservative electorate – is something new under the sun?  Or is it instead just a case of deja vu all over again…

Interestingly enough, the 1998 article noted – on page 125 – that Newt Gingrich was the “Bill Clinton of the GOP.  He’s a manipulator – flexible and malleable, willing to grab any opening to be a winner.”  (Which also sounds chillingly familiar.)

But on the page before – page 124 – there was some wisdom the “Grand Old Party” may want to pay more attention to.  The page noted that the party’s “intramural crosscurrents are fierce and difficult to manage.”  On the other hand, the Democratic Party’s ability to manage just such fierce crosscurrents did allow them to be the “governing power for decades – a willingness to deal and compromise among its contending blocs and interest groups.”

On that note see Sarah Palin vows to campaign against Paul Ryan.  As an aside, Ryan is the current Speaker of the House. The article noted Palin’s decision was “sparked by Ryan’s bombshell announcement … that he wasn’t yet ready to support Donald Trump, the Republican presumptive nominee. Palin endorsed Trump back in January.”

On a related note see Devouring Their Own.  But again getting back to the subject at hand:  Is “The Donald” indeed something new under the sun, or just deja vu all over again?

Which leads us to one last quote:

One result of these tactics [by many conservatives, back in 1998] is the brittle, bitter climate of distrust in national politics today:  the loss of civility amid endless personal accusations, the stalemates that develop on issue after issue when both sides are unable to approach the grounds where reasonable compromise can occur.  Possibly this nasty atmosphere would have developed anyway…  But Newt is the guy who poured poison in the stream.

Then of course comes the real kicker.  Donald Trump is considering Gingrich as his vice-presidential candidate.  Or that Gingrich is actively seeking the post.  (Or both.)  See for example:  A Trump-Gingrich Ticket:  So Crazy It Just Might Make Sense?

So “what we’ve got here” is either something new under the sun, or deja vu all over again.  Or maybe – instead – it’s just another failure to communicate.

According to Rolling Stone, Newt Gingrich sounded the same in 1998 as he did – politically – in 1978.  And what Newt said – and how he said it – seem eerily similar to Donald Trump’s style of campaigning today.  So whatever “problem” there is with Donald Trump goes back at least 40 years.

It may have been for that very reason that there weren’t “two consecutive two-term Republican presidents,” 16 straight years with a Republican in the White House.

Or maybe it’s just easier to win a local Congressional race with a “vocabulary of poison” than it is to win the presidency.  And who knows?  Maybe Donald Trump is the new “Bill Clinton of the GOP,” a master manipulator “flexible and malleable, willing to grab any opening.”

But is Donald Trump willing “to deal and compromise” enough to navigate the “contending blocs and interest groups” within the Republican Party?  (If not the country itself?)

History seems to show that Newt Gingrich was not able to do all that.  Which makes Trump’s flirting with the idea of Newt as his VP candidate all the more intriguing.

And all of which leads to another set musical questions:  Is Donald Trump simply another case of deja vu all over again?  Or is he “crazy?”  Or is he instead crazy like a fox? 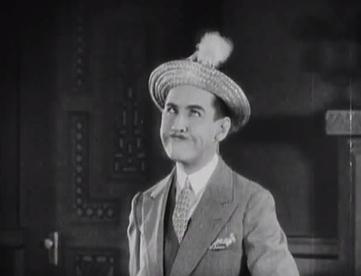 The post-title alludes to the phrase “taken from a famous (attributed) quotation from Yogi Berra:  ‘It’s like déjà vu all over again.'”  See Deja Vu All Over Again – Wikipedia, the free encyclopedia.

Déjà vu is the “phenomenon of having the strong sensation that an event or experience currently being experienced has already been experienced in the past.”  So Yogi Berra’s saying “its like deja vu all over again” would be similar to saying something was “redundant redundant.”

The upper image was borrowed from the last post, “Is there a new ‘Maverick’ in town?”  In turn the image is courtesy of Maverick (TV series) – Wikipedia.

As for the phrase “answers the musical question” see e.g. Carol Brady – Quotes – imdb.com:  “Carol Brady:  ‘Yeah, the show that asks the musical question: Can eight average people make it in the big time?'”  See also “Bibliographia” – Verbatim, Vol. 29, Issue 1, Spring 2004 (“A Decade-by-Decade Guide to the Vanishing Vocabulary of the Twentieth Century”), which included this:

In the postwar years, young people became increasingly anti-authoritarian in their behavior. Blame it on Marlon Brando in The Wild Ones.  One way to keep the old folks at bay was to cut them out of your communications…  “Kids,” a song from the 1960 musical Bye, Bye Birdie, asks the musical question, “Who can understand anything they say?”

You could also Google the term “‘answers the musical question’ phrase.”

The obsession with Bill Clinton’s scandal covers up a stink at the other end of Pennsylvania Avenue – that other Washington scandal known simply as Newt.  If Clinton were forced from office, the House Speaker, Newt Gingrich – a man loathed or distrusted not only by the public but by his own Republican colleagues – would be a heartbeat from the presidency.

The next sentence:  “‘President Gingrich.’  Not likely to happen, but truly frightening to contemplate.”

The Donald Trump image was featured in On Reagan, Kennedy – and “Dick the Butcher.”  In turn the image is courtesy of businessinsider.com/donald-trump-has-been-fired.

Re: Lunatic fringe.  Wikipedia noted that the term was “popularized by Theodore Roosevelt, who wrote in 1913 that, ‘Every reform movement has a lunatic fringe.'”  See also Lunatic Fringe, the “song by the Canadian rock band Red Rider from their 1981 album.”

The “lunatic fringe” cartoon is courtesy of Peanuts Comic Strip, April 26, 1961 on GoComics.com.

Re: “devouring their own.”  The link in the text is to Saturn Devouring His Son – Wikipedia.  That article told of the Greek god who, “fearing that he would be overthrown by one of his children, ate each one upon their birth.”  For other examples see Republicans Begin Devouring Their Own – LA Progressive, and Republicans devouring their own – Democratic Underground.  But see also COMMENTARY: Democrats are devouring their own, a website headquartered at 1400 East Nolana, McAllen, TX.

The lower image is courtesy of the Wikipedia article, “Crazy like a Fox (1926 film), a 1926 film starring Charley Chase.”  The caption reads: “Charley Chase as Wilson, the groom:”

Crazy like a Fox is a 1926 American short film starring Charley Chase.  The two-reel silent comedy stars Chase as a young man who feigns insanity in order to get out of an arranged marriage, only to find out that his sweetheart is the girl he has been arranged to marry…  The film features Oliver Hardy in a small role filmed shortly before his teaming with Stan Laurel.

Which may bring up the fact – again – that sometimes history repeats in cycles.