Amicalola Falls:  You can see these Falls hiking up to Springer Mountain, “southern terminus of the Appalachian Trail,” as seen in the 2015 movie, A Walk in the Woods…

On Sunday afternoon – last September 6 – I went to see A Walk in the Woods.

That’s the “American adventure comedy biopic film,” based on the “same name” 1998 memoir by Bill Bryson.  According to Wikipedia, Robert Redford plays Bryson, supposedlly “now in his late 50s or early 60s.”  In the movie, Bryson decides to hike the whole Appalachian Trail in one fell swoop.  (Some 2,200 miles, and after living in Britain the previous 20 years.)

That in itself requires a hefty suspension of disbelief.

Redford – born in 1936 – looks to be all of his 79 years of  age.  Beyond that, he now seems to be “paying the price for all that ultraviolet glare on the ski slopes,” as one reviewer said.  (And as noted below.)  The same critic said of Nick Nolte – Redford’s hiking buddy in the film – that the “handsomely rough-hewn star of North Dallas Forty looks more like a ruddy-faced Yeti.”

But another critic put this positive spin on the film (also on September 6):

With its odd-couple cast and appeal to grown-up audiences, “A Walk in the Woods” has performed solidly at the box office since its debut on Wednesday.  As of Saturday morning [September 5] it had grossed about $10 million.

See Fact-Checking “A Walk in the Woods.”   The reviewer – John Jurgensen – then noted his personal interest in the movie.

In college he’d spent two summers on the Trail as a ridgerunner. (Someone hired to hike various sections of the trail, and/or “tally hiker traffic, monitor trail and campsite conditions, and generally help visitors navigate and understand the A.T.”)

So I suppose I should note my own personal interest in the movie.

Back in 1967 – when I was 16 – my next-older brother and I hatched the idea of hiking the Trail from Springer Mountain to Gettysburg, where our aunt and uncle lived,   (Some 623 miles.  My brother was a year or two older.)  But for some reason my parents didn’t bust out laughing. (And they didn’t say are you serious?  Or  slap their knees while wiping away tears of laughter…)

Instead they thought it was a great idea.  (Apparently.)

So in the early summer of 1967 my brother and I found ourselves dropped off at Amicalola Falls State Park, gateway to Springer Mountain.  (Dropped off by our oldest brother, a student at Georgia Tech at the time.)  Which brings up one key difference.  (To me anyway…)

Back in 1967 we didn’t seen any “magic archway” at our Amicalola Falls entrance to the Approach Trail.  (Nor did we see a paved path of any kind.)  The park at the time was extremely primitive…  But first, a note about my brother and quitting.  (Not unlike Redford and Nolte.)

The thing is, metal-frame backpacks were all the rage back in 1967.  But as we found out, they had a tendency to chisel great gouges of flesh in one’s lower back.  See also Why Internal Frame Backpacks, on the “shift away from external frame backpacks.”  The article added:

The downsides to externals are that, because they carry the weight high and away from your back, they don’t have the best stability.  So, you run the risk of feeling tippy and off-balance … climbing or descending dicey terrain [and] you’ll likely get hung up on branches and brush…  I can’t remember the last time I saw a new or innovative external.

But it was the “flesh-gouging” that caused my brother and I to reconsider our plans after a single afternoon.   On the other hand, our oldest “Tech brother” couldn’t come back and pick us up until the following weekend.  So we were stranded, but what ended up happening was that we spent a quite pleasant – and isolated – week of tent camping, away from adult supervision.

I suppose there’s some kind of object lesson there.  (See also kismet.)

But we were talking about the “magic archway” featured in the movie, but not seen by us back in 1967.  Which is another way of saying that at least one entrance to the Approach Trail has become “all touristy.”  (Again, at least as seen in the film.)

The “magic arch,” seen from the Visitor’s Center at Amicalola Falls State Park…

Which in turn could be a metaphor for the uphill battle the film faces at the hands of critics.

At best the film has gotten mixed reviews.  One site called it “amiable yet less compelling” than a movie with Robert Redford and Nick Nolte should be.  (Also, “ultimately a bit too pedestrian,” possible pun intended.)  And critic Susan Wloszczyna asked this musical question:

There is only one question that you need to ask yourself before deciding to see “A Walk in the Woods:”  Can you justify sitting through an utterly predictable and rather tame man vs. nature ramble in order to enjoy the affable odd-couple chemistry shared by Robert Redfordand Nick Nolte?

See A Walk in the Woods Movie Review (2015), at Roger Ebert.com.  (Ebert himself died in 2013, of complications from his earlier papillary thyroid cancer.  See Wikipedia.) 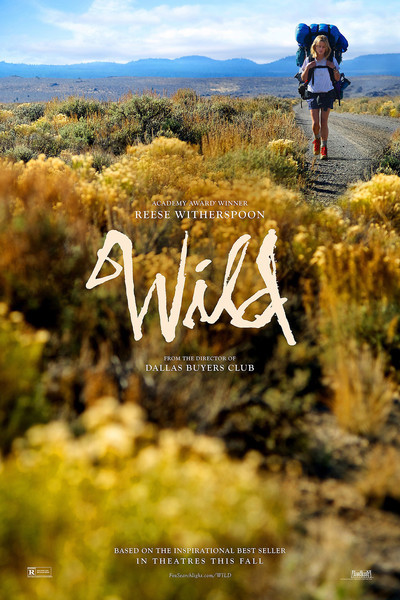 One possible answer is that Ms. Wloszczyna is more into chick flicks. She compared the film negatively with “Reese Witherspoon in last year’s ‘Wild.’”  (As shown in the movie poster at left):

Witherspoon in her Oscar-nominated role struggled with her inner demons as much as she did the elements, [but] “A Walk in the Woods” is more about two unlikely acquaintances…

Redford’s wry Bryson … tired of resting on his considerable laurels … is in a funk after attending a funeral.  That is when he spies a marker for the Georgia-to-Maine trail…   Against the wishes of his sensible British wife … Emma Thompson … he decides on a whim to attempt this marathon test of endurance and picks Katz to join him – primarily because none of his other friends are crazy enough to say yes.

“Tired of resting on his considerable laurels?”  (A metaphor perhaps?)  “Against the wishes of his sensible wife?”  “Decides on a whim?”  Ms. Wloszczyna could as easily have come out and said plainly – to Bryson and every other potential geezer over 65 – “Slow down.  Pack your manhood in cotton wool.  Smother your impulses.  Why don’t you just [expletive deleted] give up?”

Re:  accentuating the positive.  See also curveball, defined in part as a “particularly difficult issue, obstacle, or problem.”  The point being that life seems to have a habit of “throwing us curveballs.”  (And that it does little if any good to “moan and groan” about the change inherent in life.)  See also the alternate definition of dinosaur, as “someone who resists change or is old-fashioned.”

Re:  “at the hands of the critics.”  Wikipedia noted:  “Walk in the Woods has received mixed reviews from critics.  On Rotten Tomatoes, the film holds a rating of 46%, based on 104 reviews, with an average rating of 5.4/10.  The site’s critical consensus reads, “Amiable yet less compelling than any road trip movie starring Robert Redford and Nick Nolte should be, A Walk in the Woods is ultimately a bit too pedestrian.”  On Metacritic, the film has a score of 51 out of 100, based on 27 critics, indicating “mixed or average reviews.”  On CinemaScore, audiences gave the film an average grade of ‘B’ on an A+ to F scale.”

Re: Roger Ebert.   Wikipedia noted that Ebert himself “described his critical approach to films as “relative, not absolute”; he reviewed a film for what he felt it would be to its prospective audience, yet always with at least some consideration as to its value as a whole.”

The “magic archway” image is courtesy of virtualtourist.com/travel/North_America/United_States.

The “give up” image is courtesy of sumanth-j.blogspot.com/2013/06/the-giving-up-syndrome.